Show One. The Olympia Paris

Before discussing tonight's show in Paris - perhaps I should first declare my inherent bias.

Firstly, yesterday was horrible. Not a gig day, but a "travel" day, which struggled to live up to its name. 50 minutes sitting on a bus going nowhere, as we failed to leave the hotel while the bill was agreed and settled. A further twenty minutes or so sitting on the coach at the terminal, while the police prevented us from leaving our bus - before eventually deciding to escort us away from the terminal to a distant coach park where we were finally allowed to disembark. Too late to catch our flight. All followed by a hastily arranged further coach ride from Edinburgh airport to Glasgow, from where 20 tired souls eventually flew to Paris via London. A day to forget.

Secondly, I always enjoy Paris. One of the great European cities. I am a francophile, and enjoyed the chance to deliver half of "le pack royal" in French (until the US and British attendees started asking questions). And my wife has come to join me.

Thirdly, the previous show in Edinburgh was sadly only about half full - the promoter's disinterest best displayed by the large billboard outside the front of the venue still advertising the sold out Proclaimers gig from the night before - with scant mention of King Crimson. Certainly nothing in Neon or lighting.

Here in Paris, a sold out show with neon letters three or four feet tall.

Perhaps I am therefore more than a little biased. But this was by far my favourite gig of this autumn tour. The fans all over Britain were as supportive as ever, but it is almost a different band away from the UK, sitting in a completely different cultural space. Difficult to describe accurately, but it is not an historic or legacy band, but a part of current culture. A real pleasure to sit with the audience. Exactly as we experienced in Italy in the summer.

Tonight's photo of Mel and Tony on stage at the Olympia. More to follow. 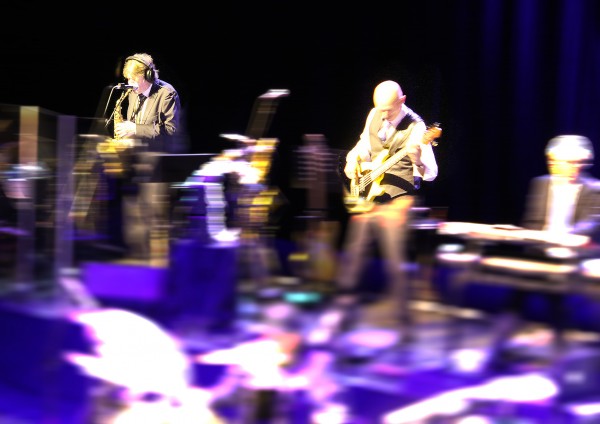