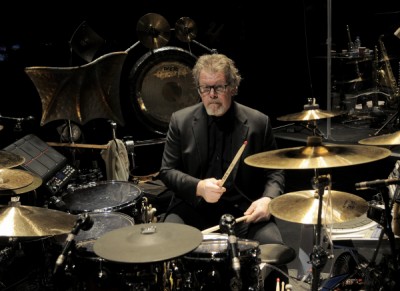 Next up for the KC playlist is Pat Mastelotto:

When doing a Russian interview I was asked to name my three favorite compositions. I chose Samuel Barber‘s Adagio for strings, Louis Armstrong‘s what a wonderful world and John Lennon‘s imagine. These songs consistently and instantly turn on faucet of emotions.

Searching for something for a drum magazine list I offered ‘Far More Drums’ from the Dave Brubeck Quartet which features Joe Morello. This was something I got turned onto by Bill Bruford in the back of a tour bus.

If your question is what I’m listening to at this moment, I just joined an Apple iTunes thing and was loading gobs into my iPad these last few days ago
I started my day with Massive Attack (“Protection” what an incredible song), lots of 10cc and Joni Mitchel and Neil Young (A man needs a maid), lots of Beatles, together and separate, and the one I played that really motivated me before the Essen show was ‘Jet’ by Wings, wow what a great track. Aftershow  Weather Report Black Market and Domino Theory, in Vienna it was Curtis Mayfield & Wendy and Lisa...

In Stockholm and Oslo, I was on Herbie Hancock and Nik Bartch which lead me to a new find - Lennie Tristano- wow!

And via Dropbox a haunting upcoming release from David KOLLAR with Arve Henriksen and a variety of relevant KC.

Jeremy’s brilliant cadenzas got me listening to Bill Evans, what a huge catalog- makes great after show listening.

As soon as we arrived Ryuichi Sakamoto dominated my iPad and that led me right to David Sylvian Raintree Crow what a great record!!

On the bullet train I started listening to Author and Punisher.

Watching more news about migration issues took my head right to the ‘grand nations of Europe’ by Randy Newman.. for some reason that took me to Aimee Mann the dodo record.

On several of the bullet trains I sit next to Jeremy and as I was sitting down I sang a few lines from ‘together again’ and realizing Jeremy didn’t know the song so to complete the verse I had to look up Buck Owens, then I spent the night listening to Buck and Merl and Willie.

That led me to Ray Charles and led me to Sly & The Family Stone.

One person's journey through Fracture

A reason to immediately...