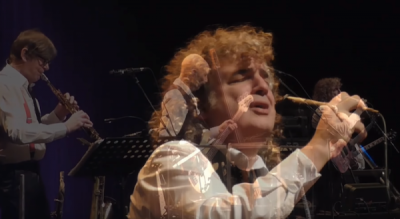 If you ever needed proof that King Crimson's Starless is one of the band's most popular tracks then a glance at the numbers notched up on Crimson's YouTube channel will confirm it. At the time of writing the video taken from 2016's Radical Action to Unseat the Hold of Monkey Mind has had 9,044,063 views since it was first uploaded. In case you're one of the few fans of the band who have yet to see the video, sit back and take a look...

The new album by TUNER (that's Pat Mastelotto and Markus Reuter) is available over at the DGM Mail Order store and will start shipping June 18. This one has been on heavy rotation here in the yellow room (see my take on it over on my blog with a fabbo snippet of the toe-tapping classic, Arson Dandy).

Robert has updated his diary to include his performance at Sutton on Juune 3rd.

Thanks to OldWimburnian for this review of Robert’s soundscape in Salisbury today. Astonishing! Earlier today I attended the Salisbury Cathedral Soundscapes.