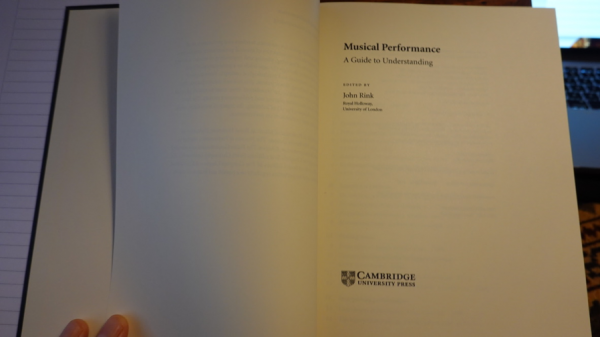 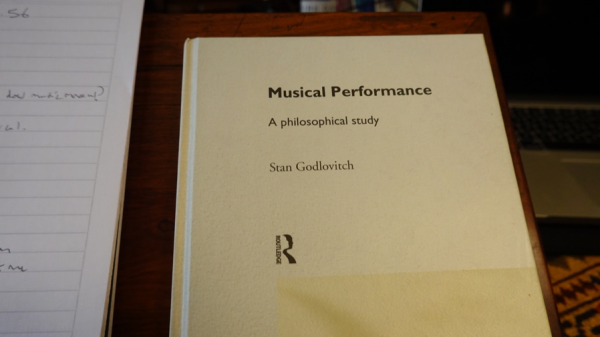 Into the kitchen c. 11.00. Toyah was asked to read The Girl With The Unicorn (La Fille à la LicorneI) by Dominic Toller, to raise funds for the children’s mental welfare charity Young Minds; so invited me to join her; along with our own unicorns… 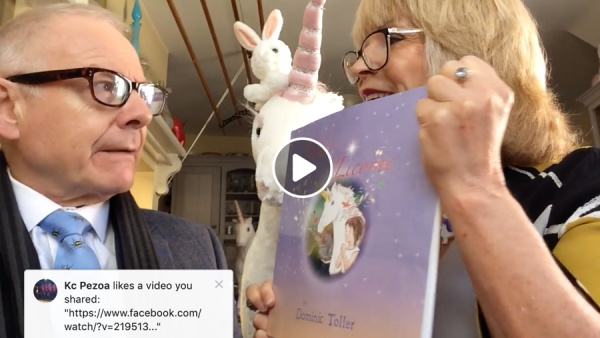 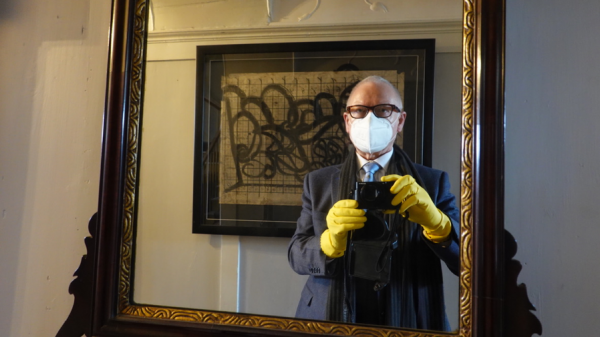 … returning with today’s shoppingness of tasty things. Lunch of Burrito and Squerd l’Orange… 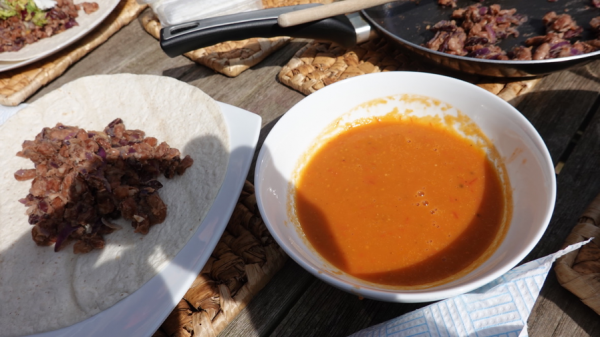 Afternoon practicing, waiting by the front door for a delivery. And then… Tiny Willcox of the Sneaky Toes twice crept up upon her husband, who was testing an approach to arpeggiation…

Q: So David how would you describe the King Crimson sound?

Q: What is it, the atmosphere that brings back King Crimson?

RF: Well, this is in the nature of individuality. Individuality and identity and flavour. How do you recognise the difference between a Beaujolais and a fine claret, for example?

RF: In my experience, yes.

Q: On stage and public performance?

Q: Is that one of the reasons that you don’t call The ProjeKcts King Crimson, that you call them ProjeKcts?

RF: No. The spirit of King Crimson is alive and well within them. But the reasonable expectations that the listening public might bring to bear, for example in terms of repertoire or formal structures, aren’t likely to be present.

Q: How far into the future of King Crimson can you see at present?

RF: I’m not going to tell you that as it will generate all manner of expectations, which would upset what will otherwise likely happen. But I have my own personal calendar underway. There are obviously... the `phone could go and all this might well change. And there are one or two things under discussion at the moment. So I have the most likely working scenario, the contingency plan for that, and then the most likely plan beyond that. Then after all that has happened, I have a sense of something in 2010.

Q: And the underlying ambition is that there will be an existence of King Crimson?

RF: No. No. Maybe. That’s one of the contingencies in there, but I think it will. If I look at King Crimson’s history, to sit here and suggest that you will see King Crimson touring for the next seven years, I think is pushing my luck. King Crimson appears and then disappears. It appears when there’s work to do, and then it seems to disappear. And that’s fine.

Q: And running for longer now than...

RF: Yes, would you like to repeat it please so everyone has it on their microphones.

RF: Alright, let me put it another way. Why should I want to?

Q: You’re a musician... it’s just for memory or whatever.

RF: What is part of my memory, that I sign an album cover for someone else, as a musician? Firstly, what is the relevance to that as a musician for me? And secondly, how does that improve my memories?

Q: I don’t take any pictures, not even when I go on vacation, it was just a...

RF: Photography is a hobby of mine.

RF: No, this is a good question.

Q: I take pictures of friends of mine, I know you’re not a friend of mine, but I take pictures of whatever. I mean it’s unusual that someone doesn’t want to be photographed. I mean I have nothing of course against your decision, I don’t even have a camera with me.

Q: So just friends are allowed to take photographs, I see.

RF: Well, there is a consensual aspect to it. But returning to autographs. My question is rather than - why would I not like to sign them - why should I like to sign them? And the answer is well sometimes I do, but they’re with friends. For example, I give a friend a book and in the front page I write a dedication to them. And something of me goes with it. My good wishes go with this.

Q: But what about the fans? Not even the fans?

RF: As a generalisation, there is an expectation and a demand to sign various memorabilia which is oppressive, and it carries with it the assumed right that I may approach you at any time, whether you’re clearly having a quiet moment, a personal moment, of reading over coffee in a restaurant, you’re on the street, you’re walking with your wife, at any time whatsoever - going to your place of work, leaving from your place of work, at your place of work - I have the right to interrupt your process and demand, as of right, your signature on this.

Q: But you are something special, for many people.

Q: Even if some people are thinking of you as a...

RF: Well, let me ask you a question. Do you sign autographs very often?

RF: No, no this is a very important thing.

Q: Let me put it this way, I’ll just try to make myself a point. I’m not as famous as you and I will never be, of course. But, if I was as famous as you I would probably think that maybe I should give something back to the people that are important.

RF: Very good. The question is how?

Q: That’s probably the most direct way that those people have to be in touch with you, or otherwise in the music.

Q: But you give some happiness to them, don’t you think so?

RF: I can’t. I can’t respond to that because I don’t know whether they’re happy or not, if you understand. I can’t speak to peoples’ response to my work. In terms of wanting to make people happy, that’s not my work.

My work as a musician is to be true. Now, if instead of that my concern is signing stuff, in which I am not allowed to respond yes or no to stuff, my concern has moved from the music. It’s moved to, the technical word is, reification. Or what Dr Lucy Green, an English musical educator, calls fetishising the inherent and delineated meanings of music. In other words the creative process, the musical process, has become a commodity-and-commercially oriented process. And that I reject.

This is how and why King Crimson occupies a very precarious place in the music industry. Because what are accepted as entirely reasonable and conventional norms of conduct within a commodity-and-commercial process, like signing pieces of your work, in the creative process are not only antithetical but are utterly destructive.

Now, who am I to say this? Well, I’m a character who’s now been playing in front of audiences for 44 years, in rock-groups for 39 years, as a professional musician for 36 years and in King Crimson for 34 years. In other words, my response to this is not arbitrary. This is part of daily warfare in the front-line of being a working musician, where you privilege music over the professional aspect.

This is an indication of the difference between music and the music industry. A possible response would be you’re being naïve. And the answer is, there’s no naivety in this: this is the stuff of my daily work. It’s why I have to seriously consider abandoning public performance. Because the nuts and bolts, the machinery of my life as a professional musician, has so little to do with music. And my responsibility as a musician, foremost, lies in being true. And included in that is courtesy and respect for the audience. What do I do, then, when I look down and see a young man holding a mobile `phone in front of my speaker? Is he listening to what I’m doing? I’m not sure. And when this gets to the point that I have to protect myself against this, on a daily basis on the road...

I don’t walk on stage to erect barriers between the audience and myself. I walk on stage to, as best as possible, find a bridge to our common humanity. And a very, very good way to end that, to end a human exchange, is to put forward a CD cover and a pen. Because our common humanity is not an issue at that moment. When you move to a non-consensual area, that I have the right to demand of you whatever because I have put my hard-earned pay on the table, there is a non-consensual element here that moves to violating, to violation, and then it’s hard. And then the question is well if this is what you do, perhaps you should do something else? And the answer is, I agree. And I am actively considering what that might be.

It’s not for me to tell people how to behave. On the other hand, if their demands on me are unreasonable, and compromise who and what I am, then obviously a response is justified. As a musician, do I have to work as a public performer? No. There are many other things I can do.