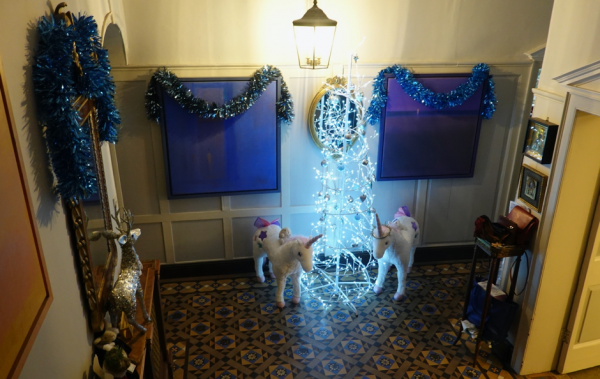 Down to Morning Sitting and writing.

The mind-set of a working player, for whom performing is primarily a touring life, is beginning to lessen its hold. The possibility of a continuing-continuity, being in one primary location, is very different to that of the continuous-discontinuity that has characterised my professional life.

One of the opportunities of a post-touring life is to see things otherwise, and reflect on the otherwise. It’s very hard to see what we’re looking at, if we believe we already know what we’re seeing. So how to assume the virtue of innocent eyes (as with innocent ears)?

Current areas of personal interest include:

2. The Systematics of Performance. What are the determining elements necessary for a performance, one that brings meaning to our lives, to take place? A performance that escapes the conditions of time, place and person, and our Market Society? About three days ago, while entering my day, I had a sense of the four terms of the tetradic music system (cf the Music System US tour of 1983) re-arranging themselves. Sitting down to address this yesterday, sixteen tetrads appeared, rather than the single, primary tetrad I have been using for four decades. The proliferating tetrads present a different range of questions, some of which provide ready answers; but more than this, suggest lines of enquiry.

There is no one way: there are a multiplicity of ways.
But before we approach the multiplicity, we establish the singular.

3. Guitar playing. Extending my capacity with guitar calisthenics and the symmetrical scale, developing fingerings I have never used while increasing my musical vocabulary: ie continuing to develop as a player. It’s unlikely that I’ll be called upon to play Fracture next week, so my musical and guitaring interests may now move in different directions to addressing a specific and challenging KC repertoire.

Ron Gaynor > Fidel Dely Murillo: As for touring... They went out on the road and played the same old shit they have been playing for years... What's next... A stint in Branson Missouri playing to the lunch and dinner crowd?

I've lost interest in him as a musician... he's grown stale...

I don't live under a rock and I don't live in the past either... I've been with them from the beginning, and there is nothing left to see!

RF:         Firstly, my gratitude to Mr. Gaynor for taking an interest in KC and my work, and for taking the time to post. Secondly, I have myself been seeking to better understand KC “from the beginning”, especially since lockdown in March 2020 gave me reflecting space.

It’s very hard to see what we’re looking at, if we believe we already know what we’re seeing.

Much of recapitulating KC history has been personally painful; but better not to ask a question unless we are willing to follow where it leads. A useful exercise I have recently applied to KC history, to unseat the hold of knowing-what-I’m-looking-at, has been to reverse the unfolding KC timeline. A decision sets on course a trajectory of action unfolding in the timestream; and often the initiating-decision, aims, motives are difficult to know. If we begin with the “outcome”, an endpoint in the process, we may better understand the nature of the beginning or starting point. So…

King Crimson’s first performance was at the Bunkamura Orchard Hall in Tokyo on December 8th. 2021 (The Anthem, Washington on September 11th. 2021 also works for me) and ends on April 9th. 1969 at The Speakeasy, London. An alternative and shorter version, which addresses a lot of current commentary, is KC ending on May 1st. 1981 at Moles Club in Bath.

The first incarnation: 2021-2014. The Seven-Headed Beast Of Terror, including an eighth during its seven-year existence. A stunning group, serving the music.

The second incarnation, 2008: a short, perfunctory and unsatisfying outing in 2008.

A proposed incarnation met for a short period of rehearsing in 2004, without playing live.

The third incarnation: 2003 – 1999. Essentially Front Man + Backing Group. The music was stronger than the band that played it. An inequitable distribution of income in 1999 de-stabilised the unit.

The ProjecKts: 1998-97. An invisible incarnation, exploding with potential.

The fourth incarnation: the Double Trio 1997-94. Beginning badly at Nashville rehearsals, but ending well in 1994. A strong, interesting, unbalanced outfit with a good mix of material that did not achieve its potential.

The fifth incarnation: 1984-81. Beginning strongly despite the problems between members, coming together in 1981 in a powerful and defining King Crimson.

As an outline for reflection, that’s only the first forty years.

…and there is nothing left to see!

Former audients with no interest in seeing the same old thing again, and/or whose favourite Crims are not onstage, thank you for your prior support. Your decision to move on is the right one IMO. And to everyone who came out to take a punt on KC during these strange and uncertain times, gratitude.

Ron Gaynor > Fidel Dely Murillo:…and his antics paint him as an old fool being lead around by a dreadful bore! If watching him make a fool of himself at the behest of his wife does anything for you, that's fine with me....

RF:         Rocking out with Toyah & Robert is fine with me too. Toyah is sharper, brighter and more insightful than her husband. As Mr. Gaynor is not one of our target audience, I’ll make no further comment here.

I know I sound down on Fripp!


The Systematics Of Performance