I wondered about the late addition of the concert at the Empire Theatre, Liverpool - but it was an interesting and interested audience. Very worthwhile, if sadly not as full as it would otherwise have been. With King Crimson we have learnt that fans make decisions when tours are first announced. And the "standard industry procedure" of delaying the announcement of some gigs never works for this band.

I already have the first review :

Is there a word to describe the music of King Crimson? If there is I couldn’t think of it when King Crimson held court at Liverpool’s Empire Theatre.

The band crossed the barriers of jazz, rock and classical music so often that it was impossible.

At times they sounded incredibly beautiful, especially in “Cadence and Cascade” and “In The Court of the Crimson King”.

At times they were frightening - loud, freaky and frightening with a soft introduction developing into a blasting from Robert Fripp and Mel Collins.

During the “Sailors Tale” it was possible to understand why Robert Fripp has been rated among the Segovias of the world, but it was sad that more of him wasn’t heard - alone.

Mel Collins, flute and sax developed well during the act - especially in “The Letters”.

Pretty accurate. Although those who attended the show may be confused at the references to “The Sailors Tale” and “The Letters”, which were absent from tonight’s setlist (and I switched the reference to “Cadence and Cascade”). That would be because this was a review from the King Crimson show at the same venue on 16th May 1971. If nothing else Barbara Drillsma, the original reviewer, would have finally got her way for tonight we heard Fripp entirely alone during his Cadenza following “Moonchild”.

Or how about this :

Cheering fans gave pop group King Crimson a standing ovation as they finished their concert at the Empire Theatre Liverpool, last night. Their avant-garde style has earned them high praise both here and in the States, where they are something of a cult. They’re largely an instrumental group - their music has been described as ‘space rock’.

A new trend for getting the reviews written several decades before you play the show. The cynical might say that they would be just as accurate - although one would expect any new review to mention the three drummers, the astonishing level of mastery, and hopefully, if we are allowed to move beyond the prosaic, the way the music touches the soul.

Tonight’s photo. In an “egalitarian band” where the eye has so much to savour, the singer still has his moment: 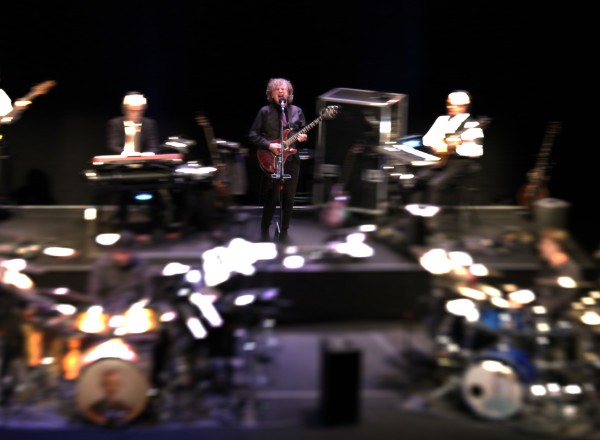 And one of Tony Levin from Manchester: 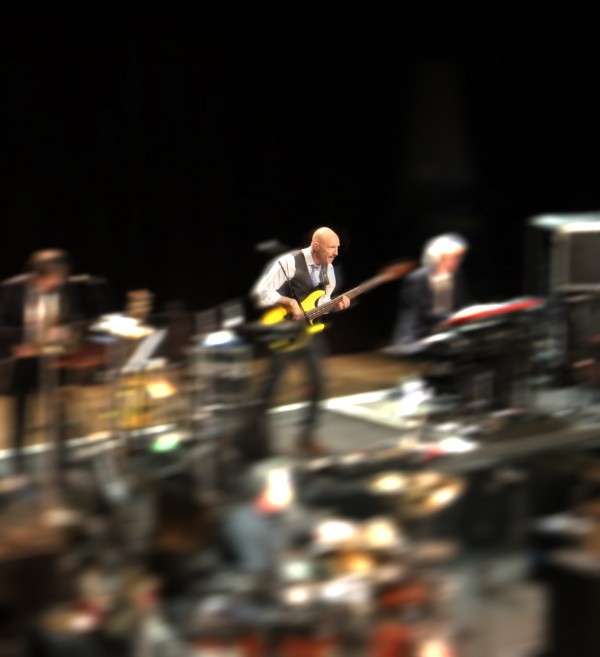