Much laughing and many tears here at FripCox House today. If tears are a blessing, today we are blessed indeed.

When Everything Falls Away, What Remains?

Bill Rieflin was first diagnosed with cancer in 2011, following the advice of Hell Boy Tom Redmond on a GC course at Camp Caravan, Massachusetts: “Hey Bill, get a fucking colonoscopy!”

When the present incarnation of KC began rehearsals at Elstree in 2014 Bill had already undergone surgery, was in good shape with ongoing monitoring of his health.

The cancer continued to return and spread, requiring increasingly invasive surgery and chemotherapy while on the road. At the point where Bill no longer had the physical strength required of the Drumsons’ centre position, he moved to keyboards and fairy dusting, situated in the Back Line between Tony and Jakko. The presence, musicality, and irreplaceable Billness of Bill continued.

The highlight of this KC, for me, was Mexico, July 14-19th. 2017, with KC as an octet. KC changed level. Returning from Mexico, Bill needed immediate treatment and, at short notice, brought in Seattle musician and Crafty Chris Gibson, bringing Chris up to speed for the second leg of KC touring in 2017 - the US.

Bill returned in 2018 for the June-July European tour. On the final performance day, in Venice on July 28th. 2018 at the Teatro La Fenice, he directed The Humans vs. King Crimson (KC overdubbing to The Humans’ track Get In Your Car And Drive). This remains to be mixed.

Returning to Seattle, Bill’s wife Francesca Sundsten, told him that she had been diagnosed with lymphoma a month before; but had not given Bill the news while he was touring.

Frankie insisted Bill go out for final KC touring of 2018: the UK and Japan. Bill flew to England, and while staying with us here, Bill’s Father died in Seattle. Bill was, fortunately, able to say goodbye to his Father the day before his flight.

After our final Paris date on November 17th. 2018, Bill flew home to Seattle for one day, joining us in Japan for his last tour with KC - November 27th. – December 21st. 2018. At this point, Bill’s pain was close to unmanageable. In Tokyo a tumour in Bill’s chest cracked his sternum.

Immediately home to Seattle just before Christmas, Bill then took care of Frankie, whose lymphoma was highly developed and incurable. Frankie reacted against her medication and finally passed under difficult conditions on March 9th. 2019.

Bill hoped to join KC for the tours of 2019, and consulted his doctor. Clearly this was not possible. But, Bill flew down to Oakland for the two KC performances at the Fox Theatre, September 5th. & 6th. 2019, chaperoned and protected by the remarkable Susan Silver. Bill addressed the Royal Package and, for the first time, was prepared to respond directly to the question – why are you not touring with KC? The question was not asked.

Bill brought two gifts to Oakland with him, paintings by Francesca Sundsten, and currently in our kitchen… 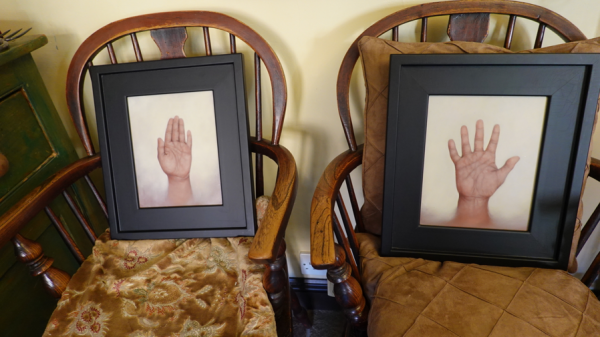 Toyah and me flew to Seattle to spend four days with Bill, November 15-18th. 2019, if he felt sufficiently well to see us. Hooray! We saw Bill every day, and sat with Bill in hospital, while he was having chemotherapy, on Tuesday, the day we came home.

At the Fairmont Hotel with Susan Silver, Monday 18th. November, 2019… 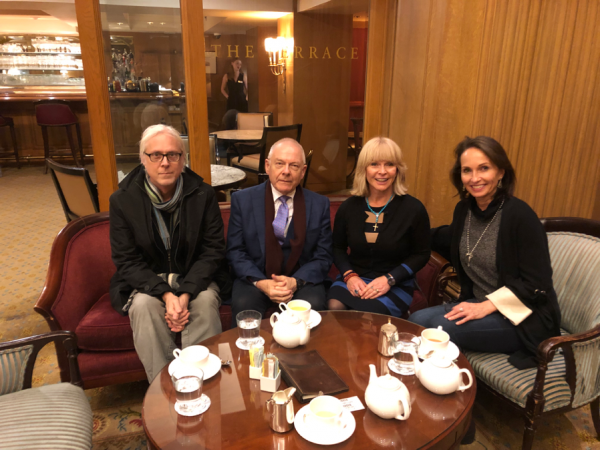 The Fairmont is where Bill worked as washer-up when he was fifteen, a job arranged by his Father.

you have both taught me what it is to be generous.
i am forever grateful and in your debt.

BIBBLY B
you have taught us about creativity , swapping hotel rooms, talent and friendship.
xxxxxx

Bill sent us a selfie. 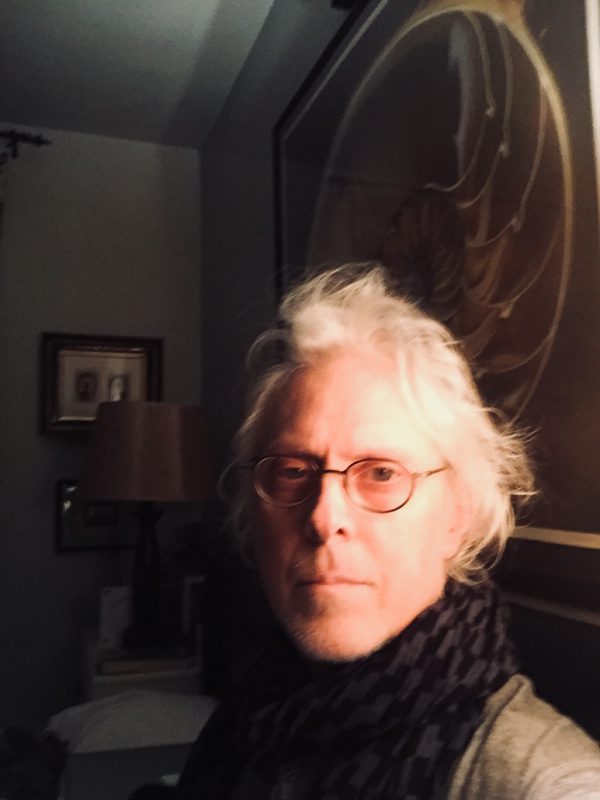 it’s my bedroom. above the bed is a
large drawing in pastel of a nautilus.
i was just tucking myself in.

i think of you two often and wanted
to let you know.

We felt this was Bill saying goodbye. We were about to book tickets to visit Bill for a weekend visiting March 7th – 8th.

dearest ones,
the margaritas await your arrival;
the blu-ray up and running, ready to delight;
the fireplace set to warm your cockles;
the sea scene, seen as it's reflecting light.
in short, there’s simply not
a more congenial spot.
xox b.

… when T had a sense that the corona virus was going to kick-in big time. So, we let go of the plan.

Bill > Toyah
We made good things together. Some of my best work ever

turns out that gil evans arranged & conducted
three j. mathis tracks - all on mathis’ first record (March 21, 1956):
but since i don’t own this record, my listening will have to wait.
just a version of dick haymes doing “…Spring."

(Bill and me are both Johnny Mathis fans).

For the past month Bill’s treatment has been directed to pain relief for tumours in the spine and brain. Sister Tracy checked Bill into hospital last Friday 20th. March. Bill was suffering a very painful sinus infection which moved to his remaining compromised lung, riddled with multiple tumours. It was difficult getting Bill a room because of the number of people at the hospital, affected by the Corona virus.

(Bill tested non-positive). Given the prevailing conditions, Tracy was not allowed to stay with her Brother.

Yesterday, Tuesday, Tracy received a call from the hospital.  Tracy insisted that the family be allowed to be with Bill at the end. Mother Olive, Brother Fritz and Sister Tracy were with him. Tracy called us yesterday around 22.30: Bill was suffering anxiety, so the medics had sedated him. Bill’s remaining lung was so compromised it put too much strain on his heart, and Bill slipped away. Tracy said it was a blessing and very peaceful; that the day was grey and, as Bill flew away, the clouds opened and the skies were blue for about fifteen minutes.

Fly well, Brother Bill! My life is immeasurably richer for knowing you.

Dearest Bill Rieflin slipped from this world, yesterday, in Seattle from cancer.

He wasn’t alone but the virus meant no one other than patients where allowed to enter the hospital. Bill’s sister, Tracy, determined that Bill would not pass away without his family by his side stood outside on the pavement till the hospital allowed her in. The wonderful staff at the Oncology unit gave access to Bill’s mother Olive and young brother Fritz to be at his side.

The pain this extraordinary man has endured in the past 9 years has been unbearable to witness, not only was his body being destroyed by cancer but he also had to bare the cruellest twist of them all, the loss of his beautiful wife Frankie on the 9th March 2019.

Bill was a titan throughout.

To be truthful, Bill was the greatest human being I have ever known, equal only to my Husband.

He brought me back to life at a time when I had lost faith in the world.
He treated me like an artist.
Our work together was intense. He made me cry as much as he made me laugh and we laughed a lot.

One night, while working on the album SUGAR RUSH he had me re-write the lyrics to LOVE IN A DIFFERENT WAY 8 times, through the night, before saying “no I prefer the original version.”

Robert Fripp my husband would exclaim “This is the Toyah and Bill show!”

No one understood our bond and no one trespassed into this baffling territory.
Robert went as far to suggest we were twin souls.
You will hear many wonderful stories from his fellow musicians of his ability to change hotel rooms as much as 5 times in an hour. He was incapable of tolerance when it came to being short changed. I loved this about him. If we had a meal at a restaurant that he didn’t like he would phone the restaurant the next day and tell them the meal was shit.

When he was mixing SMALL TOWN PSYCHOPATH I was on a cruise ship giving a lecture, when he phoned me, I explained the call was costing me £12 a minute and could he wait till I was on land. No, he couldn’t and he continued to play me 5 different mixes of this 5-minute song, each with the most minute of changes…….

GOD I WILL MISS HIM SO MUCH.

When Bill first became ill I drove him all over the UK. Taking him to renowned healers in a desperate bid not to lose him to cancer, this was 2011.

Bill was not a great believer in “the other side” but I feel the one thing meeting healers did for him was convince him his body was just a vehicle, a vehicle Bill occupied in this moment in time, Bill was eternal like all souls.

Everyone loved him deeply. June Field, the renowned Scottish healer meditated with Bill every day at 5pm for three years from wherever they both were in the world. This gave Bill huge comfort.

Bill hated the fact I loved him unconditionally. He could tolerate it from Robert, who loved him just as much but he would always say to me not to bother. Then he would do something utterly extraordinary and gift me a ruff opal, of a jade bracelet, or a book on Frida Kahlo or call me as I came round from an operation and talk to me for 2 hours because I was alone, Robert being away touring.

A common theme among all his friends was his reluctance to be loved and helped. Ironically in the end he couldn’t escape any of our love.
He was helped by the most wonderful community of friends, who in the last year of his life checked on him, fed him, took him out of the house and LOVED HIM UNCONDITIONALLY.

Bill I will love you unconditionally forever.