Rising c. 06.20. Continuing on with a sore throat and less Grrrrrrr! than usual.

Morning Sitting in the Home Study. Reading and writing… 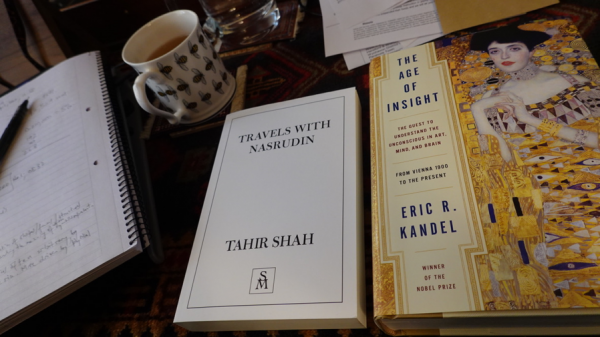 11.10 A wonderful mangling from a fanzine…

“Make an apparently unfavourable position become all the contrary. As it more unfavourable appears to be, greater the possible advantage will be” [Robert Fripp]

Convinced blogger, the artifice of King Crimson, Robert Fripp, has been pouring his ideas and concerns into a blog for many years and in the current situation that we live because of the new coronavirus, Robert was not going to disappoint us.

Robert is an early riser. He usually gets out of bed around 7 in the morning and likes to spend the first part of the day reading while listening to music (me too! Although I do it when I can). According to Fripp, the situation of self-confinement created by the new coronavirus, far from frightening him, represents for him "a formidable opportunity that I accept with glee/joy“

With his peculiar style, the British guitarist, confined in his residence in Bredonborough for more than a month, has expressed his impressions on countless topics in the diary: from a written response to a bad-mannered fan to the usual outfit with which he leaves his home to go buy groceries.

18.05 An outbreak of impressive dopiness on The Wasps’ Nest of Facebook from Italian posters (mangled)…

Francesco Donadio: the point is not wealth or villona (they earned it, certainly), clashes the gaudious attitude in which they wish you "happy lockdown" (what do you want it to be? ) while they don't do any lockdown but basic they are spending a pleasant relaxing time in their vast country estate.

Luisa Bonifacio: ... rather than hypocrites whining and everyday exploitation of many, I prefer the harmless follies of Fripp...

Francesco Donadio: Luisa Bonifacio - but harmless not so much: their message at the end is "we stay home, how nice it is to stay at home". When they actually don't fit at all - they have boundless property - and it's likely that They even have someone going to file at the supermarket for them.

Rossella De Marinis: I also find that there is nothing wrong with making money, indeed. If they don't steal naturally. It is flaunting your wealth in a little shallow way that can annoy, especially in such a little carefree moment... a bit the famous slap in the face to those who can't even make it to the end of the month. Kind of overreacting, like someone eating a big dinner in front of a starving guy, I mean, I wouldn't do that.. This seems to me like a person who as Francesco says doesn't realize what he does. People so spoiled that they lost touch with normal life.

Paolo Gente: Who makes the good life, with rich bank account, his butt saved and a house with all comforts.... doesn't realize anything, he has a laugh to see fripp and comes back to see his smart tv with 4-5 exclusive subscriptions.

Francesco Donadio: That is more than a terrace though. And theirs is something different from a lockdown: it's a very pleasant relaxing time in the country estate.

Francesco Donadio: Don't you find that display out of place in a period that is dramatic for many? ...but the mega park could have spared. That's not lockdown. 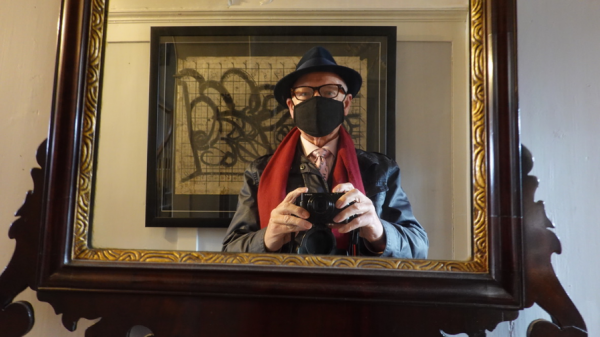 … to post a letter, I took the opportunity to search for a mega park, even a boundless property - one that is more than a terrace - in the centre of our wonderful town... 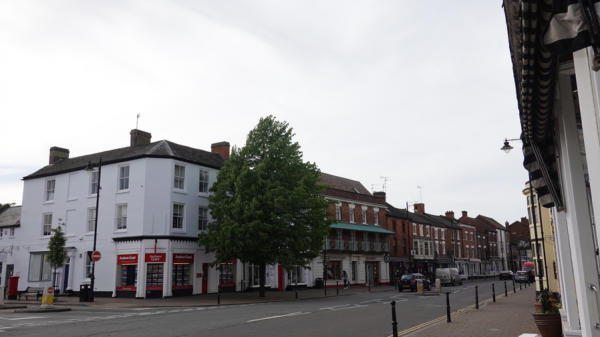 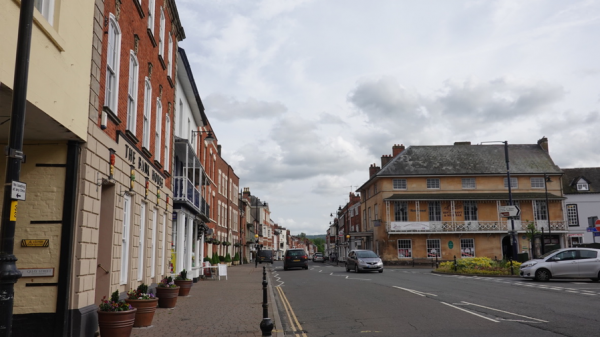 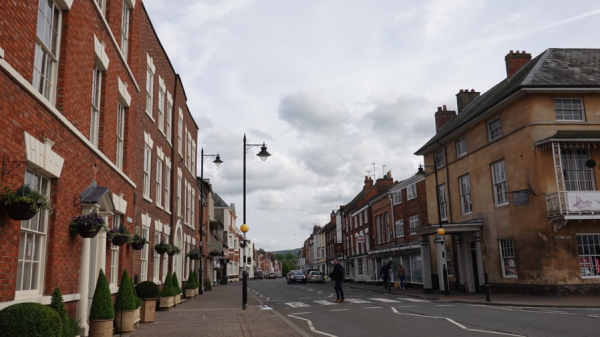 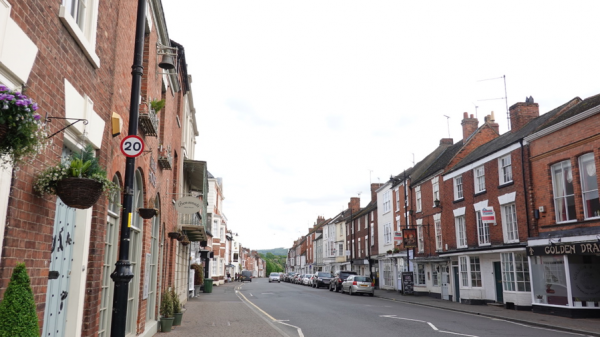 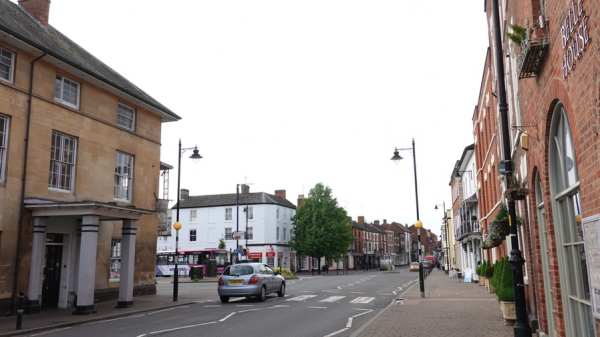 The only expanse of land, a riverside field, I could find is behind The Angel Inn. Conventionally, it is used for events such as weddings, and festival/carnival events of the local variety, when a tent is pitched. Currently the Inn is closed and eventings are not.

I ventured out from my Home Study, after nearly six hours at desk and computer after spending a pleasant relaxing time on a heaving inbox and business arisings, to walk our Boundless & Vasty Park (of dimunitive scale and undiminished joy-givingness)… 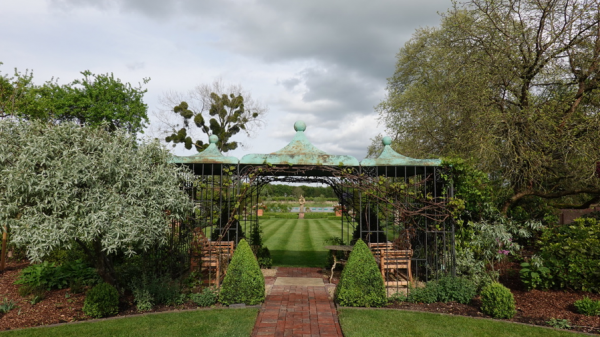 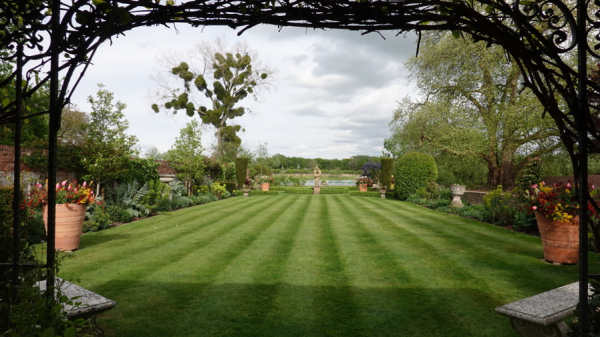 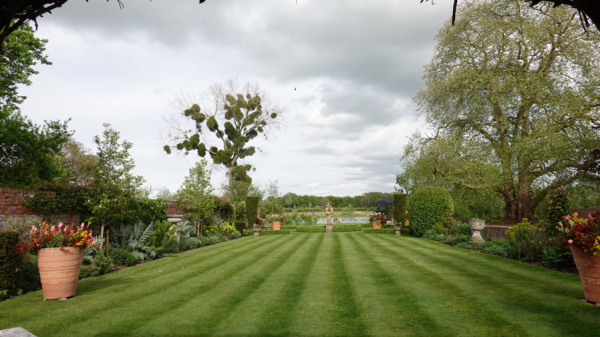 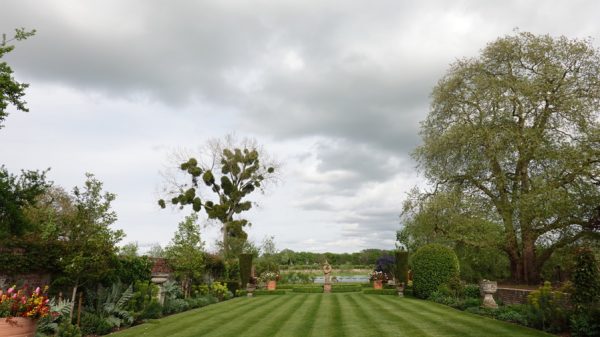 In accordance with English practice, the owner of a riverside property has rights that extend as far as the middle of the river. The “lake” on the other side of the river is an inlet to a hydro-electric plant that powers the town’s fitness centre. The land beyond that is farmland and a flood plain. Currently, we enjoy both the bleating of lambs and the view.

Of land attached to any of my homes, beginning with Thornhill Cottage, Holt, Dorset in 1971, this is the smallest. Thornhill had two acres in two fields.

Fernhill House, Witchampton (1980), the Fripp family village, also had two acres in two fields. This was where I began extensive planting, of traditional hardwood trees around the boundary, a copse of mixed hard and softwoods (to fire wood-burning stoves); a vegetable and fruit cage, with bee hives for pollination. At that time, I sought self-sufficiency in anticipation of social breakdown.

Reddish House (December 18th. 1987), our first marital home, was the largest in terms of attached land, almost six acres and including a water garden. Here we planted yew around the entire perimeter, also a lime avenue, plus a large vegetable and fruit area.

Evershot Old Mansion (1999) was of similar size garden to here, although with a different lay-out. Once again, we planted yew extensively.

We moved to Bredonborough in November 2001, to be near Toyah’s retired parents in the next village up-river. From the moment I stepped through the front door, it struck me as a set-up. There have been several occasions in my life when circumstances have come together, in unforeseen and surprising ways, that have re-directed the external trajectory of my life (not the internal trajectory); and in such a way that I trust. So, at that time in 2001, I had no idea why we were being guided here, but continue to trust the guiding hand. 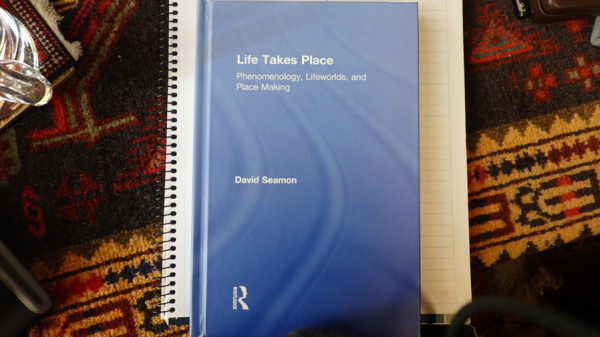 When any of us have good fortune, to live and enjoy wherever we are, we also have a corresponding responsibility to property and community. Part of the responsibility of ownership (that is, accepting stewardship for a period of years) begins with the fabric of the house. English convention suggests that a roof must be re-furbished every forty years, and re-built every one hundred. Our roof was of the one-hundred year kind. 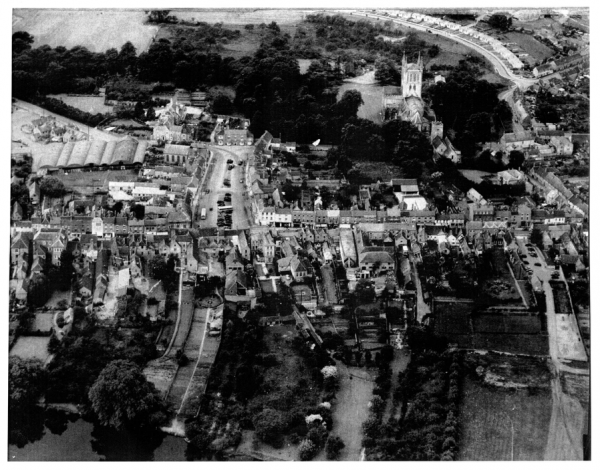 Our strip of land to the river can be seen in the bottom-left quadrant, with the white path down the middle. The open land to the right belongs to neighbouring properties.

In 1949 our strip was used for growing vegetables. The layout we inherited, of five garden rooms, probably dates from c. 1995. The first garden room, with fountain, had extensive box planting. The box was crippled by box-blight, had to be removed, and the fountain-room re-planned. The second garden room was the cherry orchard, but cherry trees have a limited life span: half of ours died of old age. Then the greenhouse fell in. So, this room has also been re-designed.

Why create a garden? If our personal nature is creative, we tend to engage creatively with whatever field interests us. We might also say that, by intentionally / creatively involving ourselves in the life of a garden, it increases/intensifies the “intelligence” and presence of the garden space; even the garden’s “consciousness”.

At our home, we have the advantage that within a small area it is possible to do much more in terms of detail, such as planting, than in a large area. Cf Cecil Beaton on his Reddish House (an astonishing, post-war creation in Austerity Britain): the Grand Manner on a small scale. Sir Cecil, a renowned society photographer, was a master of the surface. He never addressed the fabric of the building, which was close to collapse when we moved in.

Francesco Donadio Rita Rocca … surely they also have an array of handyman able to help them. I really don't think they do alone.

I am happy dealing with the architecture of a garden, and its functions, but I am not a trained plant-person. Fortunately, Matthew the Superb does have these skills. The planting is mainly due to him. Matthew and Cara come in on Monday morning, and work so conscientiously that they may well be mistaken for an array of handyman.

Every morning on rising I express gratitude for my Wife, our home, and those who support our lives here.

Every evening, before my head hits the pillow, I express gratitude for my Wife, our home, and those who support our lives here.

Now, I've honestly seen some bad things in the last 60 days, but the worst - I'd say unforgivable - were the dancerecce performances of Robert Fripp and his wife Toyah Wilcox at their house during the lockdown Good morning. I also understand the " autoironic " tone of the scenes, but with which face the two wish the normal King Crimson fan (and of the same Toyah) locked up in a 60/80/100/120 sqm house (when it's ok) " happy lockdown " and " happy Easter lockdown " with a 36 teeth smile, being careful to show their monumental cuisine and the large, indeed immense, park that revolves all around their mansion with lots of swan lake and fake unicorns? And, mind well, mine is not social envy: just disconcerted to realize that there are people in this world who do not realize what they say and what they do.

Daniela Giombini Sorry I absolutely disagree I like their self-mockery and their way of getting into play despite Fripp's age and musical background. I find them hilarious.

Francesco Donadio Daniela Giombini also wishing everyone happy lockdown even if they don't actually do it at all? Good morning

Francesco Donadio Daniela Giombini sure but do you understand what I mean... there are people who are really suffering this period and their looks like a cruel joke, made that way then.

Gius Mars Simona Sammicheli yes yes, regardless of the display of their wealth, they are nice

Francesco Donadio Pasquale Stea but even the first kitchen didn't bother too much. In the end it's always the usual question of stars with impressive penthouses and villas that come to you and tell you how nice it is to stay home...

Francesco Donadio Max Stefani even? Humanly? I don't. That's why I was baffled with all this superficiality.

Max Stefani After reading dozens of his interviews in the English press to make the book, I came to this conclusion. From a human point of view.

Francesco Donadio…That is more than a terrace though. And theirs is something different from a lockdown: it's a very pleasant relaxing time in the country estate.

RF: Heartless, Raging, Hypocritical, Detached From Reality, A Venal Asshole Fripp - from a human point of view – Spoiled And Out Of Touch With Normal Life!

I’m wondering if it’s possible to be adjudged an asshole from a non-human point of view.

Paul K. Grunden Our boats widely differ, but we're all in the same dangerous waters. Stuck in drab exurban apartment isolation, I enjoy following these days-in-a-relatively-comfortable-life posts from a reasonably middle class minor celebrity and his delightful spouse. It's a bit of uplift.

RF: My life has rarely been comfortable, and reasonably middle class doesn’t quite represent my background, aspirations and social position. And yes, I believe we’re all in the same boat, in the same dangerous waters.

Throat in pain, to settle.