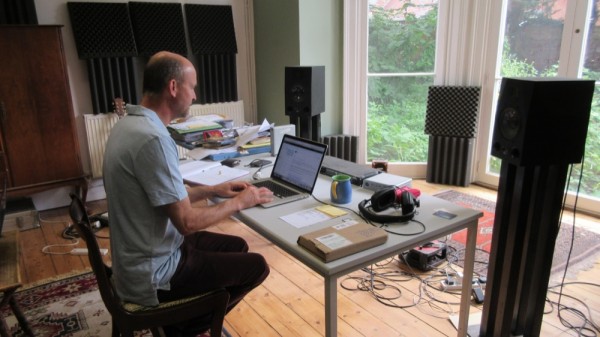 This morning’s adventure in sound, an upcoming KC Official Bootleg - King Crimson: Live In Chicago (June 28th. 2017); a report from the road in the form of a roughly-scribed love letter; albeit that fails to convey the experience of being present in a room when The Beast unfurls and comes to life. But perhaps an aide memoire for someone in the clinches.

Moving from Bellscape & Orchestral Werning, LTIA Part One to Neurotica. The inclusion of this in KC’s current repertoire, along with Indiscipline, has generated a measure of heat in Chateau Belewbeloid.

On Adrian’s Facebook page for June 23rd. 2017…
Dave Dreyfus: It's a fun video (Talking Heads) from Rome and especially cool to hear Adrian trying out sounds that one year later turned into King Crimson's Discipline album. Interesting to hear some of those arrangements rearranged by the mostly Brit KC team out touring in 2016 and 2017. For example the current lead singer now sings the spoken word Indiscipline lyric.
Adrian Belew: I don't find that interesting. we had an agreement they would not perform anything I wrote. hmmm

Adrian’s concern prompted a telephone conversation between Adrian, Martha Belew, Adrian’s de facto manager, in Mount Juliet and David Singleton, King Crimson manager / minister, in KC’s Denver Hotel-Quite-Acceptable on June 23rd. 2017 (nominally a day off). Several matters were discussed, including Adrian’s understanding of the “agreement” between Adrian and myself by telephone (September 9th. 2013). I did not know, until the ‘phone conversation with David, that Adrian viewed the “agreement” as conditions upon which he was prepared to walk away from the band without a fuss.

Another point raised by Martha: … if Adrian was in this band, we’d want the others paid as sidemen; this preceded by the comment that she thought it may be why Adrian wasn’t asked to join the current line-up.

The basis on which Martha and Adrian considered Tony, Jakko, Bill, Mel, Pat, Jeremy and Gavin available and willing to be hired as sidemen to Adrian, and why they might wish to, was not mentioned. But Martha’s assumption is correct: this is one of four primary reasons why the current KC is not for Adrian, and reason sufficient on its own to preclude membership of King Crimson’s equal-sharing group endeavour.

Martha’s comment evidences an attitude developing in Chateau Belewbeloid through the Noughties which, despite much good musical and personal history, I felt myself increasingly unable to engage. Today, it strikes me as an attitude out-of-touch, a misjudgement of Adrian’s station. Views of the Crimson Universe from Planet Belew appear to be remorsely pre-Copernican. As might have been said in the Dorset of my youth: Our Ade’s gettin’ a bit above himself.

Adrian’s expressed concerns regarding the repertoire: he has learned that KC sings his lyrics and melody in Neurotica. Adrian does not consider this a "re-imagining" but an actual performance of Adrian’s words and melodies without his permission. Regardless of the extent of Adrian-associated songs included in current KC repertoire, he does not want this. Adrian’s concern goes beyond 1980s material: he does not want another singer to sing or perform any of his songs from Adrian’s entire tenure as lyricist, singer, songwriter. For Adrian, the lyrics and the melodies belong to him, although it is fine with him if the songs are performed as instrumentals. Adrian worked for a large portion of his life on those melodies, lyrics; recording and touring the world to establish them, make them memorable and beloved. It is not OK with Adrian to have Jakko singing, even changing his work, in an embarrassing way. Should DGM release any live KC recordings of material Adrian considers as belonging to him, without his permission, this is another issue as well.

I am happy to do anything I can to resolve this. It is tragic that two people who worked together for so many years to create so much wonderful music should be in such violent disagreement.

I know you are very unhappy. Equally Robert pulled me aside yesterday morning, quoting your recent Facebook post, and suggesting that he therefore maybe needed to respond with a public statement explaining the current and historic situation between you as he sees it. This seems a recipe for despair.

Robert also sent me a recent setlist from your Power Trio, pointing out that it included nine King Crimson songs, many of which, in his words, were highly collaborative or written on templates which he created. He made no explanation, but I assume his point was that he sees these as being as much his songs or King Crimson's songs as your songs, and that if it is fine for you to play them, why should it not equally be fine for him to play them?

In that sense, it comes back to where I started which is that the two of you have a shared musical legacy. As the singer and lyricist, I can, of course, understand why you feel that “the lyrics and the melodies belong to me”, and marvel at the time you spent making them memorable and beloved. Equally, I am sure that Robert would feel that the originating guitar lines are just as key to many songs, and that he has devoted just as much energy and time taking these songs into the world. Tony Levin and Bill Bruford doubtless feel the same. In that sense, both legally and morally, the songs in their entirety belong to all of you. And, of course, the right to perform or record them belongs to the whole world. You are upset that King Crimson are playing them "without my permission", but no-one needs permission from anyone to play or record any of the King Crimson catalogue.

It occurs to me that King Crimson, like many bands, has often played historic material with changed line-ups. There were many examples in the 1970s, but even after 1981, you played Red and Larks Tongues from the Wetton/Cross era, the six-piece added Talking Drum and 21st Century Schizoid Man from 1969, and the double duo in 2000 continued to play songs co-written by Tony Levin and Bill Bruford after they had left the band. From an external perspective, this seemed entirely normal and natural. No-one sought or needed any permission from earlier members…

While I am very happy to do all I can to resolve this, I struggle to see how to square the circle. Martha is right that your belief that the other members of the band should be paid as side-men would have made it difficult for you to be a part of the current incarnation, which has eight equal members, but even so, I know the circumstances of you leaving the band were strained. As such, I suspect that this is a situation that dates back to unresolved issues at the time. I have already spoken to Robert about the points you raised in your phone-call (as in my reply), and I will also copy this email to him. I fear that your Facebook post may already have set this on a more public path, but it would seem best for everyone if possible to avoid a public spat, which seems a waste of both of your creative energies when everything in both worlds seems to be going so very well.

The telephone conversation between Adrian and myself (September 9th. 2013), which ended with Adrian believing us to have an agreement, was more monologue than dialogue: dudgeon was high, grapes were sour. Adrian made an opening statement, followed by three demands, and a final declaration (that Adrian was not prepared to be The Eighth Man, and was quitting the band).

Friedrich Steger: The new KC ruined indiscipline. Spoken part is now lousy singed.
August 2 at 12:01am
Adrian Belew: I asked them not to do anything I wrote. it was a gentleman's agreement.
August 4 at 6:52pm

Adrian continues to imply publicly that I am not honouring my word. A considered response to this is a longer story, and not a happy one.

Now the good news: Adrian has an Oscar, Flux and two great bands. This / these are considerable achievements, wonderful and happy-making, excellent for Adrian-fans who prefer the Belew-centric KC of 1999-2003 over the present KC.

More good news: King Crimson Formation 9.1, the fourth Definitive Formation by my reckoning, continues on, accessing KC repertoire of past, present and future.

Surely, music enough for many, if not for all?

12.10 Moving through The Lizard Suite and now on Islands.