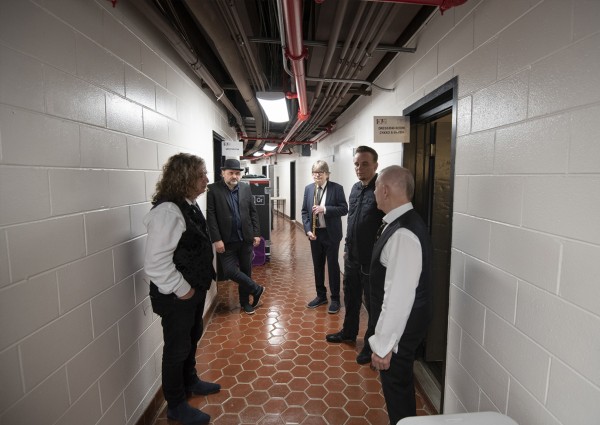 Written by Karl Halpin
There are only 5 stars to give?
I really wish I could get something along the lines of a digital download, you know, for a nominal fee, of this show. Or any show because they were probably all great! Including Zappa band sets! I hope they tour again real soon. Forget my or anyone else's review... Go see them!!!

Written by Paul Crane Jr
Absolutely worth the trip!
I’ve been a fan of King Crimson almost as long as I can remember. My dad had the Court LP, and I can remember vividly being in awe of the title track at 5 years old in 1970…..By the time Discipline was released, I had the entire LP collection (minus Earthbound). I was lucky enough to have seen two shows in 1984 (Santa Barbara and Irvine). By 2019, I’d been living in Alaska, and I wanted so badly to fly to the Lower 48 to catch the 50th Anniversary tour, but didn’t think I’d be able to justify the expense to my wife….but close to one of the final dates, I mentioned it to her. She shocked me by saying “Well, why not? If it’s something you really want, then let’s do it!” But by then the tour was nearly over, and then of course Covid killed the 2020 tour. But I was not to be deterred – my wife said she would come to hear my “weirdo music” (her term), so - by god - I was gonna make it happen….I bought a pair of Royal Package Tickets and used up all our airline miles to fly from Alaska to new Jersey for the Holmdel show. I had very much wanted to share Crimson’s music with her before we went, but she refused, saying that she wanted to experience the band with no expectations – a blank canvas, so I decided to honor that wish, thinking that it would be an interesting experiment – King Crimson music has always been a part of me – my wife was going in completely blind….. We managed to dodge the tail end of a hurricane two days before the show (I was convinced it would be cancelled), and I later heard that part of the venue had actually flooded, cancelling a concert there earlier in the week. Yet it turned out to be a glorious sunny afternoon, and we were greeted at the gate by Iona Singleton (who was just lovely and even recognized that we had come in from Alaska). We then went in to the seating area for the Royal Package talks. Robert Fripp came out and was just delightful. He spoke about being in the moment, and how very easily one can carelessly remove oneself from the moment. (After the talks but before the show, my wife said of RF, “That man just penetrated my soul….I just love him!”) David Singleton was next, giving us some short previews of restored Frippertronics performances from the upcoming Exposure box, and then Pat Mastellotto appeared for a brief Q&A before the gates opened for the general audience. Before the very end, I was able to ask David if the session tapes for Islands, Larks and Red would be forthcoming on DGM in the same way that Court, Poseidon and Lizard had over the past couple years. He answered, in effect, that yes, it needed to happen, though he said that Larks would likely be a daunting task just because of the sheer number of session tapes! (Best spoiler alert ever!) After hitting up the merch table, we settled in for the show. I hadn’t been to a proper concert in over 20 years, and it had been 37 years since last seeing King Crimson, so I was just beside myself even before the Zappa Band came out for the opening set. My wife and I were 4th row center, and the view of the stage was perfect! The Zappa Band was sensational, and I was so overcome by being at a live show that I actually had tears in my eyes during one of Mike Keneally’s solos…. King Crimson’s set began with a newly recorded RF spoken intro (Yayyyy!), which soon led into a blistering Drumzilla that nearly knocked me out of my chair. Pictures > Court > OMRN > Tony Cadenza > Red….It was just incredible….Islands was a moment of calm before the maelstrom of Neurotica into Indiscipline….Epitaph, Radical Action II, Level Five, and then Starless, which gave me goosebumps and more tears, finally ending with a 21CSM encore with an astounding solo from Gavin… The show was amazing from start to finish, although I must say that the sound up front was quite muddy during the heavier portions of the performances. On Islands, Epitaph, and Starless the mix was excellent, but otherwise the drum line was so close that you could not only clearly hear the drummers in front of you, but also the amplified drummers in the sound system. But this is a minor complaint - My wife genuinely loved the show, particularly Robert and Mel, though she also said the sound wasn’t as clear as she’d have liked….So on our way back to the car, I vowed to myself that one way or another we’d see another show before tour’s end….. (Boston)

Written by Knox Carey
I wish you were here to see it
Heraclitus said that no man steps into the same river twice; I submit that no concertgoer ever hears the same Crimson twice. If you think about King Crimson as a "band" in the ordinary sense, you're missing something essential. King Crimson is more of a process than a band. On the scale of decades, the group coalesces and dissipates. The repertoire is deconstructed, challenged, and refashioned from the materials to hand. If you are interested in hearing a faithful reconstruction of some particular manifestation of King Crimson, recordings are readily available. But if you can put aside your own nostalgia and allow the unfolding process to carry you where it will, you will come to appreciate that reinvention is the key to Crimson's incredible vitality. You must experience it in realtime, at the moment of creation. As rhythmic motifs are volleyed between the percussionists in the introduction to Indiscipline, an intricate high-wire act that seems like it might fail at any moment. As Mel Collins gestures to a backstage confidant after a particularly effective solo. As Jakko Jakszyk, his voice rough toward the end of the show, gives the final push to nail the word "black" in Starless. As Robert Fripp's amused smile melts into open-mouthed wonder during Gavin Harrison's solo in 21st Century Schizoid Man. Live recordings may give you a sense of the magic, but experiencing it in person is a privilege and a delight. I brought my eighteen year-old son to this show — his first King Crimson experience. He was astonished by the virtuosity and sheer energy of the performance, which he characterized perfectly on our walk back to the bus: these guys really put the 'boom' in 'boomer'! High praise indeed.

Written by Jonathan Measor
Whoa! What a show!
Holy shit! Outstanding show. I'm born in the '80s my parents had me on Keith Jarrett, Wagner, and The Rolling Stones for most of my childhood. My scout leader only played Alan Parsons. My good friend and neighbor, G, let me in on the sound of King Crimson. Until a week ago I only listened to King Crimson when G would put it on the HiFi. On 90.7 WFUV I heard Alisa Ali mention the New Haven CT 2021 show. I began to look for tix that I might gift G because he's been a great friend to invite me to many things over time. Oddly, just a few hours later G called offering a Royal Package ticket to King Crimson at PNC. Bizarre. I was honored to accept. Now I began to earnestly listen to Bob Fripp and the Boys last Sunday. I must say that the older recordings and the D/A conversion don't allow for a great listening experience and I had my doubts. Those doubts were soon shattered at the live show; the power, the huge sound, the front row seats, the intimate pre-show Royal Package experience, the woodwinds, and the percussion. Oh! The percussion! By trade, I'm a photographer, but in a previous life, I was a radio technician. The heavy drums lifted the strings and Mel Collins' woodwinds like a transmitter's carrier wave. The sound was so huge and resonant. High amplitude and frequency full was the music. I teared up as the first drum heads were struck with anticipation of what was to come. And what came was nothing more than transcendent. Mr. Fripp spoke of how some experience the show in one way or another, and to me, this was an experience to be envied, to cause me to be lifted. The music is smart, elegant, and extremely artful. Robert Fripp sat in the top corner, stage left, proudly looked over his creation. This arrangement is truly something to behold. About the weight of the sound, to try and quote the simple Lyle "Chip" Chipperson, "the sound was so heavy the devil couldn't lift it up." What a show! Thank you, Mr. Fripp. Thank you, G.