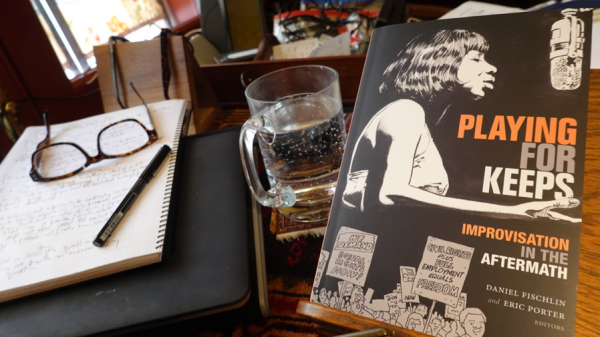 Reflecting, continuing on from yesterday morning: how to report on my professional life in such a way that engages possible readers, rather than repelling them? The Wasps’ Nest, its associated attitudes and demands; problematic players; and above all, the Music Industry: mismanagement, alienation and disempowerment of artists, an effective colonialism of music and musicians. Currently, the Empire of UMG https://www.universalmusic.com/billboard-names-sir-lucian-grainge-as-first-ever-executive-of-the-decade-jody-gerson-as-executive-of-the-year-on-2020- power-100/ reigns supreme. The incompetence of collection agencies such as PRS and MCPS, the dopiness of PPL and its categorisations, Spotify and YouTube disbursements to artists; the alienation and disempowerment of artists, with consequent economic, emotional and musical damage.

But however readers might deal with the Standard Operating Practices of the industry, how may I? How to remain in Hell without despair?

Keep thy mind in Hell and despair not http://orthochristian.com/82322.html, words given to St. Silouan, the spiritual Father of Fr. Sophrony, founder of the Patriarchal Stavropegic Monastery of St. John the Baptist in Tolleshunt Knights, Maldon, Essex, England. Brother Peter Willis, now a Deacon in the Russian Orthodox Church and living in Falmouth, took me to Fr. Sophrony’s Monastery in Essex, where I stood in his presence.

Peter and myself met on a tube train en route to Randolph House, the JGB house near Little Venice in West London, and went on together to the IACE Sherborne V (1976-75) https://www.jgbennett.org/?s=sherborne+house. We shared various adventures at Sherborne, and then more after returning to the world. We looked at how we might engage with the future, and part of this involved a farming project at Gwedna, near Godolphin Cross, Cornwall.

In 1979 we visited Stavravouni Monastery http://ringofchrist.com/early-christian-history/early-places-of-worship/first-monasteries/stavrovouni-monastery/ in Cyprus. Peter introduced me to Vladamir Lossky’s Mystical Theology Of The Eastern Church https://orthodoxwiki.org/Vladimir_Lossky the influence of which may be seen in the words to Under Heavy Manners https://genius.com/Robert-fripp-under-heavy-manners-lyrics…

I remain in hell, without despair

When visiting Gwedna Farm in the early 1980s, at a difficult time in my life (and many of those times were difficult), looking from my bed at one of Peter’s paintings on the wall, it spoke to me: it made a direct contact. The main elements of Peter’s original artwork became the front and back covers of KC’s Three Of A Perfect Pair… 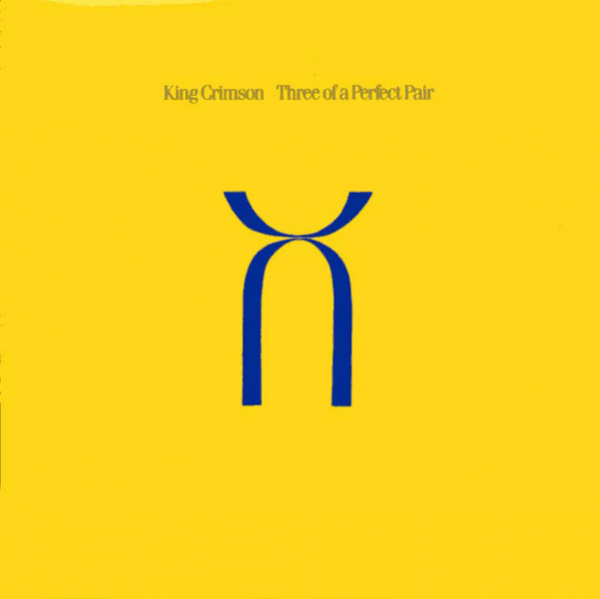 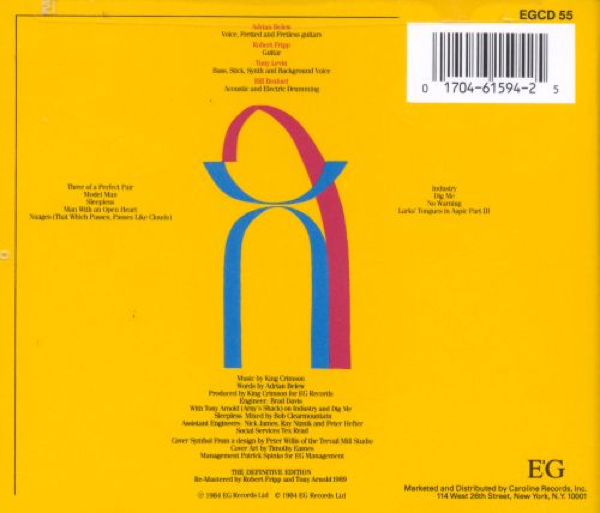 Movement from the dyad, the pair, to the triad: three of a perfect pair. The third term brings together the force, but irreconcilable nature, of the two opposing principles. Discussing this with Peter, his aim was reconciliation between the Byzantine and Western churches.

Brother Peter went into the Russian Orthodox Church, where he is presently a Deacon; I went into the world. And it seems I’m still here. 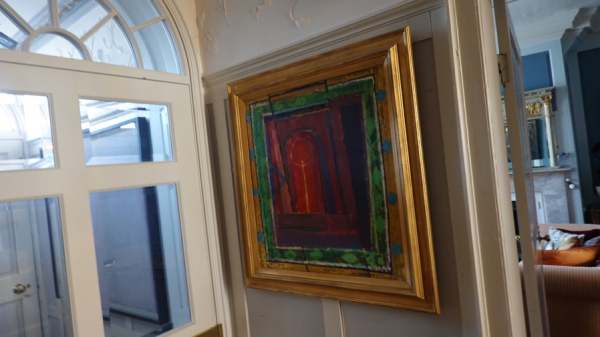 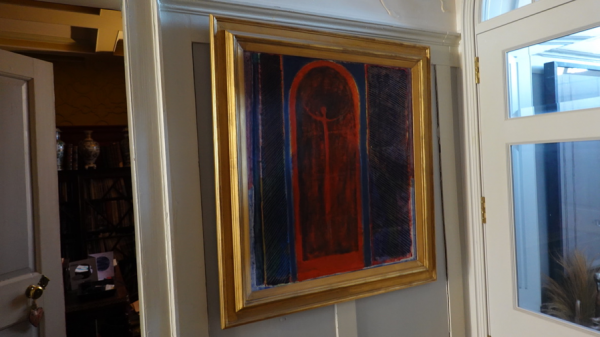 In our kitchen, an icon brought back in 1979 from the lower monastery at Stavravouni, painted by Father Athanasius… 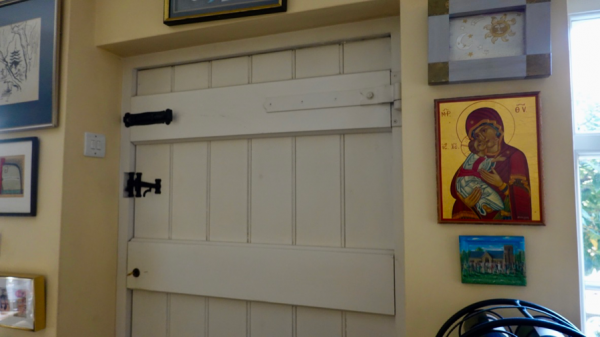 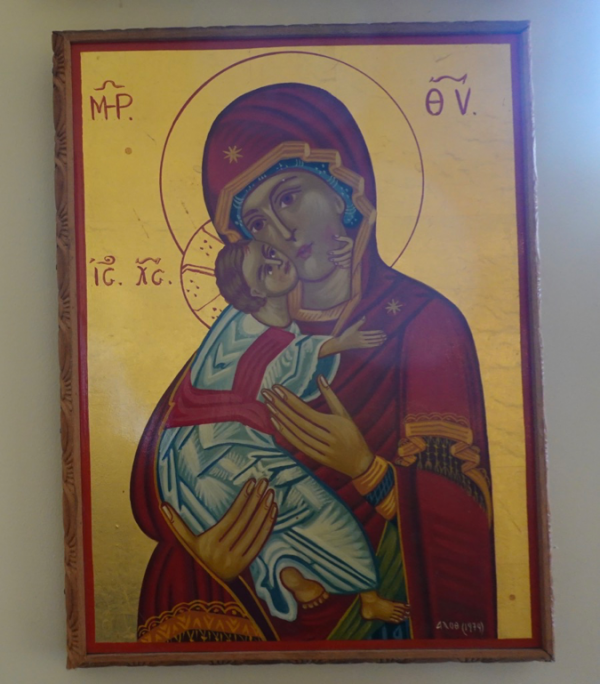 Further reflecting: how, in post-1981 King Crimson, open group improvisation played a lesser part than, say, 1973-74 Crimson; and until the ProjeKts of 1997-98. The mechanics of how and why that might have been.

Improvisation holds the question open: it may/may not provide an answer; and might provide a better question. 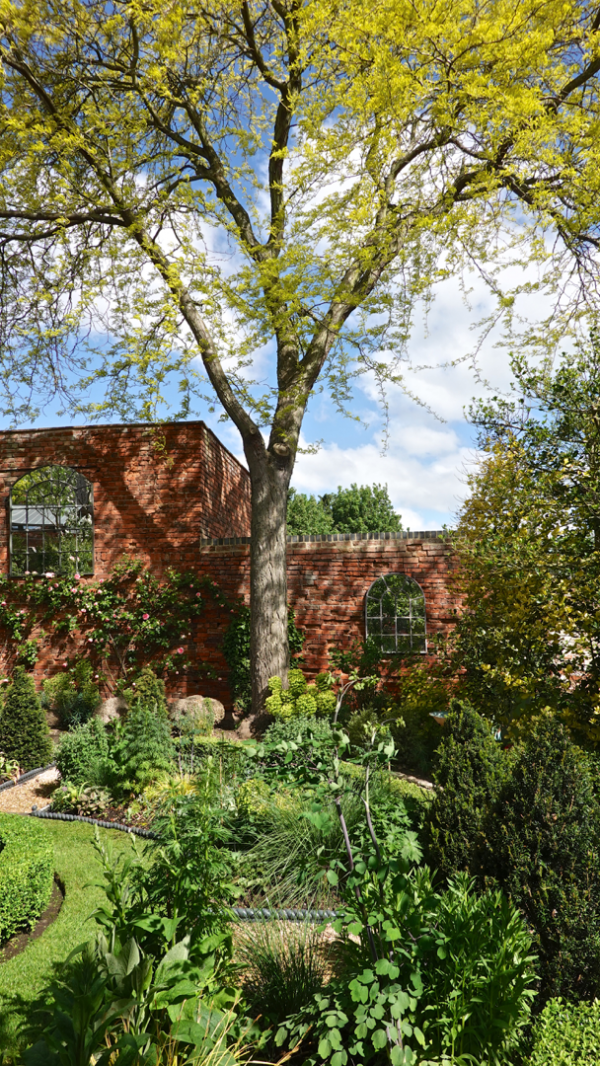 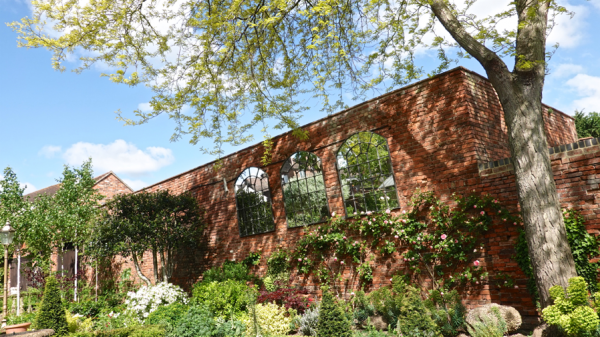 19.33      To the Cellar for practicing; returning to the Home Study for stuff, attacking the inbox, and engaging in Quiet Moments.