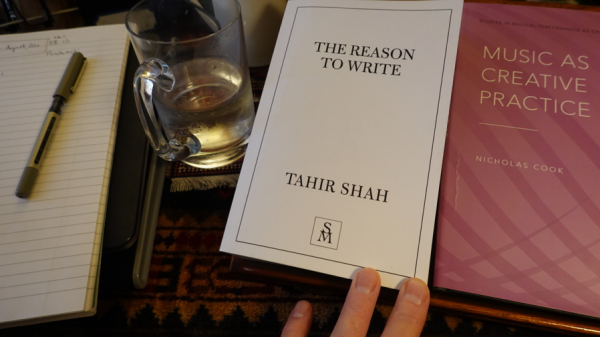 Nino Batista: I don't think any of us set out to live our life like RF, but, we probably should, nah?
RF: No! No! No! Mr. Batista's trajectory in life is uniquely his. Mr. Cedric Hendrix's life is also. And both these esteemed gents know this, and live this. May none of us in the world, anywhere in the world, be persuaded to be other than who we are. Me, I discover where I'm going by going there: I follow my feet when they go walking.

I wouldn’t wish my life on anyone, with the possible exception of one former manager. In the unlikelihood that anyone would be interested, it’s probably impossible to describe / explain what I do across a very broad range of interests and responsibilities, on several continents. This in purely exoteric terms, such as could fit on a timeline. Like, the trajectory of a professional life.

The creative life escapes a timeline, while also appearing on the list of things done, achieved, failed, abandoned, rejected, lauded et al. I heard and saw music at fifteen that, with the guitar around that young man’s neck, had no place or part in anything I had heard or played. Fifty-nine years later, that music has found its place in the world. So, in 1961, did the music drive me forward, or did it reach back and pull me towards it?

I discover where I'm going by going there. While a rational and reasonable man, this is not what takes me where I’m going, but helps in explaining where I am once I get there. My best sense of this is, I was born with a trajectory but not a lot of signposts. When that young man reached a crossroads, every seven years, he had to judge which way to go (and then on his forty-second birthday found himself on course).

And here we are in 2020: strange and uncertain times. My surprise is, from a vantage point of the world in 1974, that it took so long. How to engage with uncertainty? Certainly, not by doing what we were doing within the constraints of the commercial society: exclusion and inequity; and acting from Received Opinion.  If there were any time to try something different, this is about as good an opportunity as it gets.

How about - Play! Freely engage creatively with the people, materials, situations at hand, without concern for outcome and results. Responsibility comes with mature creative endeavor, and problem-solving seeks creative outcomes. Like, how to move to an inclusive and equitable society? That’s a wicked problem, and perilous.

In times of peril and calamity, the English seek humour. This is part of what it is to be English (I am half-Welsh, but was brought up in England). Perhaps English humour takes forms that strike good people from other countries (in English-speak, foreigners) as strange, even unusual. How we deal with the unusual? Some are uncomfortable when a fixed-opinion is confronted by non-congruent material. That is, their world-view is threatened.

How do we judge a person from the role they play in public? What criteria do we apply?

All-in-all, if there were ever a time to vary strategies, to experiment with alternative approaches to being in the world and out of it, this would seem to be that time. If not now, then when? Presently, we have choices available, but with a limited period of time available to act on them IMO. After that, inevitability kicks in and contingency replaces choice.

I don’t know what I’m doing, which is great: because it would compromise me doing it. This is the assumption of unknowingness, without a rich field of experience.

For most of my personal life, the primary continuity was dis-continuity, regular irregularity. This has its own rhythm and changes, opportunities and challenges, and goes very much against my personal type. The current continuity, of time, place and my Wife, is very acceptable to me (while this quiet and reflective elderly man continues to act against type).

Much recent attention has been directed towards preparing the final draft of The Guitar Circle for Panegyric Publishing, this with much discussion between Panegyric, editors Mariana and Jaxie, and myself. The aim is quality, the constraints are the current practicalities and difficulties pressing on us all. Our choice: to complete the book to the standard required and then choose a publication date.

From an e-letter to a Crafty…

GC courses are pressure cookers: they focus a small lifetime in a small lifetime, except that by referring to the calendar we discover the past year of our life flew by in a week.

One of the advantages of finding ourselves in compressed situations with other people is to better discover our mechanical functioning. In our normal, daily lives, we can often escape from the frictions and difficulties that bring us up against various contradictions in how we believe ourselves to be.

For example, emotionally, GC courses can be very hard. Some of us, often through suffering inappropriate and perhaps improper experiences in our early lives, have greater emotional fragilities than others. This is not a reflection on who we are as much as what we are. If my legs have been broken, I may not choose to undertake marathon running as a way of life. Perhaps walking is sufficient exercise for me.

No blame: this is what it is. The cards are dealt, we play the game as honourably as we may. And help is at least as available to us as we are to receiving it.

The first day of winding up the Crimson Beast of Terror in preparation for unleashing it on the world. Apparently, the English magazine Classic Rock, in their review of The Power To Believe, suggest we should call it a day. This is the simple arrogance of a reviewer not yet quite grown out of believing their own reviews. Yet not quite approaching the arrogance of Andy Gill reviewing The Construction Of Light: “music is too important to be left to musicians”. Perhaps Mr. Gill’s view is that music is not only important, and on this we agree, but of such importance that it should be left to Mr. Gill to decide how it might enter our world.

One of the joys of preparing for a Crimson tour, is that “True Fans” are already reliably negative, hostile and insulting, and posting. Here, from the most recent ET:

The Fripper 'mandating' crapola guidelines?... that keeps me from getting 'true-fan' tickets ahead of time?  Could it be The Fripper & Co. wants a piece of the $15 'membership fee'??????   In which case, I have a simple reply: Bobby, kiss my arse

All par for the course, then. I’m not sure there is much relevance in pointing out that the band, including myself, have not been involved in ticketing arrangements. Nor have we been consulted on setting the (too high) ticket prices.

But, for those True Fans who are already disappointed, even before the beginning of rehearsals, the course of action should be clear: this is not a band for you. True Fans can choose the band they patronise, but the band is not in a position to select its audience. This is clearly unfair. Life is hard enough already, so better to be kind to yourself primarily; and do us a favour, secondarily: take your business, ill-manners and poor attitude elsewhere and give them to a more grateful artist.

… from a short visit this morning to the online world, an accurate picture of why live performance is the front line. If True Fans love you, they will also hate you. If Untrue Fans hate you, they hate you anyway. Why should this be? Simply, “fandom” is a centre of gravity, where we live, our station, a “state of consciousness”. Actually, a state of unconsciousness. These comments are reports from the Basement of what it is like to live there.

Perhaps Classic Rock was right after all.

During Level Five today – the intelligence or identity of the piece was with us in the room as we played it. I have experienced this several times before with L5. It has a strong sense of itself.

The reviewer in Rolling Stone (Germany), who suggests that this band is “definitely an anachronism”, is suggesting that maturity and the qualities of focus, discrimination and acceptingness that this confers, are not of value to him. Applying the dictum the reviewer reviews themselves  I note that the reviewer is declaring these to be qualities of which he is unaware. And why should he know them? Youth has its own power, qualities and capacities, and these strengths accompany the arrogance that permits witless judgement and dopey commentary. As older men know well.

There are times when I should be with my Wife. This weekend is one of those times. Several reviewers have also suggested that this would be a good idea. Those reviewers who have never had to bow their head in the presence of the Intelligence that informs and prompts music, could not know of the necessity that calls on aspirant musicians to give it voice, despite what this entails.

For my part, I have no ambition. I wish to act rightly, and play rightly. This is qualitatively different. Ambition is a drive that has its seat below the navel. The wish to “get it right” lies between the navel and the throat. What I want is something different from what I wish. I want to be at home with my Wife, but my life is not quite at my own disposal. So, for those who would encourage me to go home, no encouragement is needed.

We have a good review in (American) Rolling Stone by David Fricke. It seems that Rolling Stone has actually allowed someone who knows the band and their music, over many years, to write the review. Perhaps the music-going public is unaware of the fact that many editors intentionally choose reviewers that are antipathetic to the subjects of the review, knowing the review will be hostile. The writer of a lengthy piece on Crimson, several years ago in England, told me that his new editor had instructed him to play up the divisions and antipathies within the band and its former members. There are, in any case, certain former members that need no encouragement to be sour, resentful, nor bitter. But why should an editor want this line to be pushed?

But for Crimson to be reviewed on its own terms, for what it is pro or con, is a very different experience. It is now easy for me to detect which reviewers have listened to and engaged with an album, and which have pulled their Crimson clichés out of the filing cabinet marked Received Opinions and a folder inside titled Witless In Extremis .

17.50        Recently, the weather has been exceptionally mixed, even for England. Although Summer has moved over for Autumn, there have recently been some summery days… 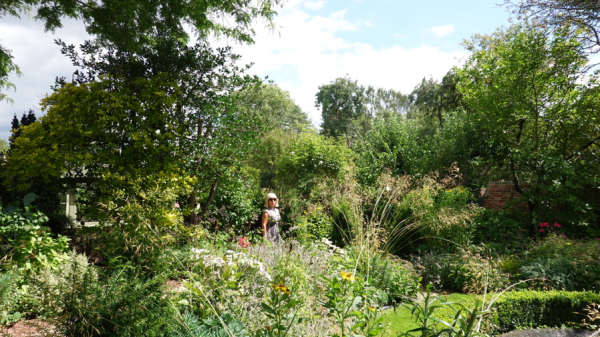 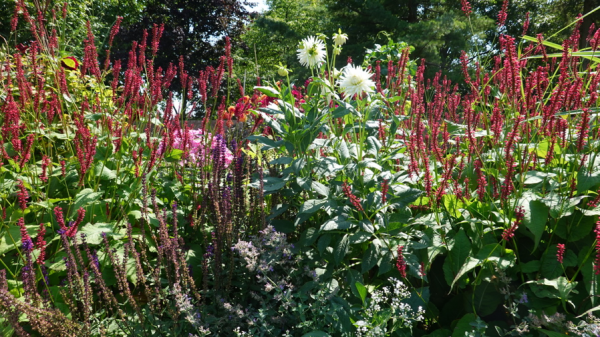 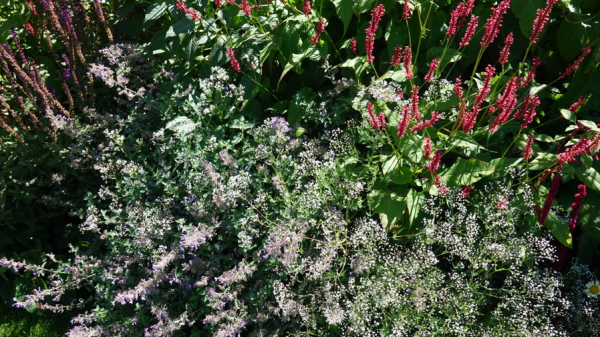 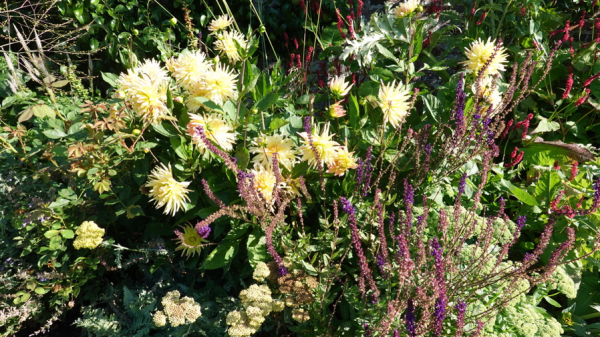 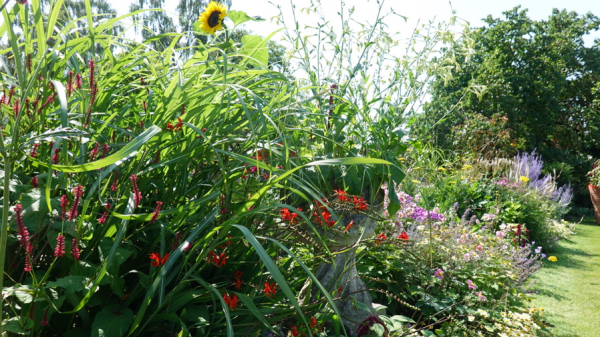 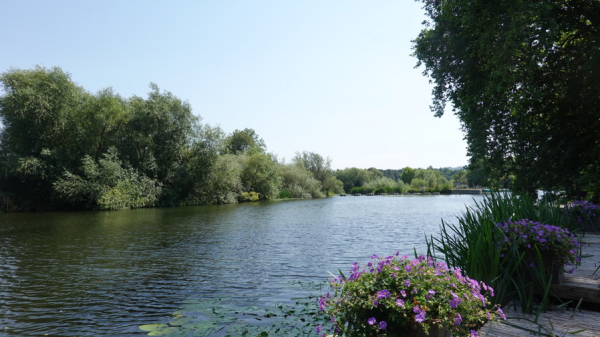 … and tasty pears are appearing (0uch)… 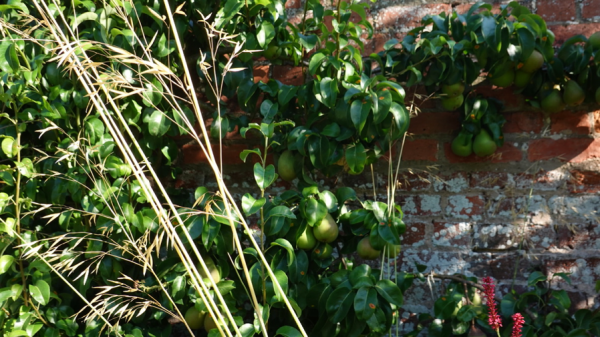 19.39        Emergency watering. The time for me to head to the Cellar, and claim the nominal title of working guitarist, has expired.