Rising at 05.15, a little against gravity for the second morning. This indicates that my body is moving to this time zone, nine hours away from the Centre Of The Universe, in Bredonborough.

Down to the excellent Trough Of Wonder, Bliss & Joy Arising in this wonderful hotel. Much of the overall forty-nine years of live as this travelling player has been in less supportive accomodations, the early years in exceptionally modest facilities. Even the current incarnation of King Crimson has suffered some duds, on this leg of the tour as well. Dud hotels, to a working player of seventy-two, can make me ill. What prime criterion do I apply for a Hotel Quite Acceptable? The quality of service. I don’t need marble, gold and glitter, but a member of staff who assumes the virtue and makes me feel welcomed. Here – woweelamus hyper est! Service at the highest level. 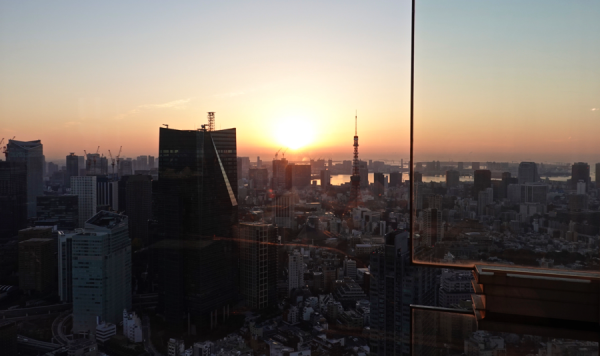 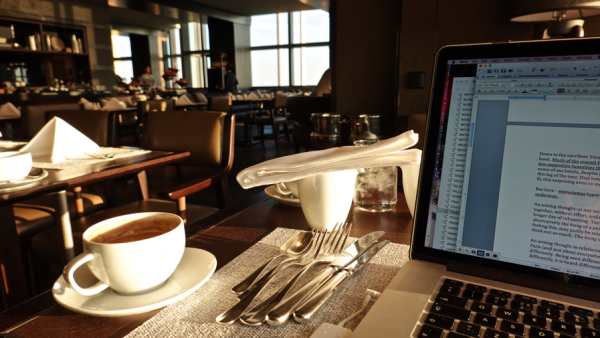 Current reflections: at our tech-rehearsals here on Friday, the band came gently together, without effort, unforced. This became clearer to me on Saturday, during a longer day of rehearsing. Technically, this is often referred to as inner-togetherness; alternatively the being of a person; more rarely, that of a group. Seeing this, feeling this, my perception of this, may partly be related to the recent shift in my onstage practice; but I think not so much. The being of this King Crimson has moved to another level. How might this be?

Continuing to play and work together; shared life on the road; common challenges and experiences; the functional necessity of playing relatively complex music, where the distribution and independence of parts requires an ongoing alertness, acceptance of the roles of others within the group, almost as if the music is constructed in such a way that the aim is to bring the players together. These are all contributory factors. But I feel that the equality of players: no one is the star, everyone is the star; the performance is not about little me, no one player is determined to be the centre of attention - the band (and music) is the centre of attention; this is a determining factor.

The player serves the music: easy words. In King Crimson, now an actuality. These players are all able to lead, support and play-nothing.

Dear audient: do you know that not everyone in a band listens to the other members? And, for the star of the band, why should they? They are the star! Everyone else listens to them, and follows them. Dear audient: do you know how difficult it is for some players just to stop playing? To find a point of quietude within themself, allow a still point to resonate and spread outwards, giving space and openness and support to other members of the band?

So, what to do when points of quietude, repose and non-demanding presence are absent from a band, even a very successful band? The more successful the band, the more likely the increase in restrictions, limitations and conditions: for individual members to make demands to privilege their own narrowly-defined self-interest; for exploitative management and record company to control their artists; for fans who have rights - they have handed over hard-earned pay! - to exert their own wants on that successful band?

One strategy is to break up the band; so its overall trajectory, in a larger moment, has the potential to remain on course. This is radical action.

There are other professional approaches to forming bands, and legitimately so. Those approaches will be reflected in the music. They may have huge success within mass culture. Popular culture is something else, and King Crimson something other.

Also within the morning’s overall reflection, DGM Packages and how to better connect to audients within CrimWorld: https://www.dgmlive.com/in-depth/six-principles-of-the-performance-event…

Six Principles of the Performance Event
A principle is universal, a rule is inflexible, a law is invariable

Music so wishes to be heard that sometimes it calls on unlikely characters to give it voice, and to give it ears. This wishing-to-be heard calls into existence the Performance Event; where music, musician and audience may come together as one, in communion.

This communion has six different forms of being and experiencing itself (plus an invisible seventh); and these forms, or principles, are simultaneously present within the Performance.

I
When people get together with music, something happens.

The Creation continues being created.

In a performance event, the Benevolence that gives rise to Music brings together musicians and audience.

Things come together, mysteriously; and go better than we deserve, or might expect them to.

III
A performance can take on a life and character of its own.

Any particular performance event  - with these people, in this place, at this time - defines the conditions of the performance: the where, when and what of the event.
This is on the outside.

That the event happens is a given.
How we participate, listen, respond, is open and available.

If this is so, the performance can take on a life and character of its own.
It is unique.

The degree to which the performance is a whole event, depends upon the extent to which Musician and Audience and Music are able to enter into Communion as One.

The distinction between both is less than we might believe it to be.

V​
The possible is possible.

We begin with the possible, and move gradually towards the impossible.

VI
The impossible is possible.

Normality is what we might achieve, given who we are, what we are, the conditions and limitations of the world we work within.

Nevertheless, we begin with the possible and move gradually towards the impossible; trusting that the Benevolence which gives rise to Music is never far away.

So, the impossible is possible.

The Seventh Principle resides within Silence.

The Six Principles assume a common aim, goodwill and a willingness to participate in good spirit within the event, and the capacity to do so.

In a sense the Six Principles are available when the highest in us comes together; in the knowledge that, essentially, we are the same person.

The worst is, that the possible becomes impossible.
This is the Null Event: nothing happens.

A Null Event has no life span, no persistence, no present moment of its own.
The event disappears, as if it never was; and, really, it wasn’t.
The Null Event is a complete waste of time and energy.
Something is lost.

May we trust the inexpressible Benevolence of the Creative Impulse.