A tale of two concerts

Woah! What a concert!  The first night of the new tour, after a fairly average family and friends warm up yesterday evening– and the body of the first set was quite simply one of the best concerts I have ever attended. By anyone. The music was quite simply singing with the angels. Many of the song pairings (“Suitable Grounds for the Blues” into “Larks Tongues in Aspic Part IV”) were inspired. It was as if Larks Tongues was newly written as the second darker half of Suitable Grounds.

This being the first night of the tour, both human and technical frailty inevitably crept in around the edges – but for a long while the music remained perfect even while all the notes played may not have been. And the sound (sitting straight behind the mixing desk) was impeccable – pleasingly so, as we were using our own PA which we are taking with us throughout the tour (at the maddening expense of now needing two equipment trucks – but that is another story).

Were I not the manager, I would shout from the rooftops that any music lover who does not already possess a ticket should rush out and get one to see this band while they still can.  As it is, I may be perceived to have an ulterior motive – but I shall shout it anyway because on tonight’s evidence, it is undeniably true. This band really does set a standard for what is possible in live performance.

And I shall now post this diary before signing off for the night, lest my customary English reticence persuades me to temper it in the morning. 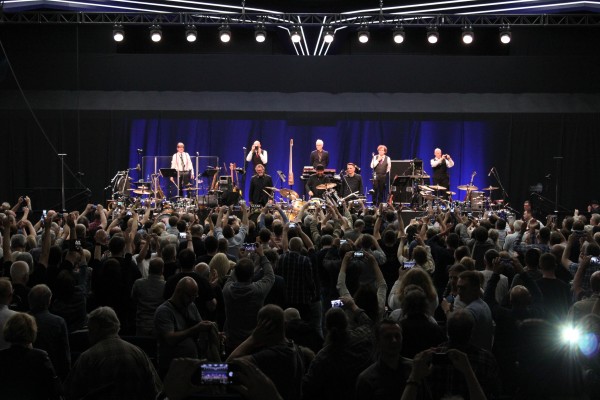