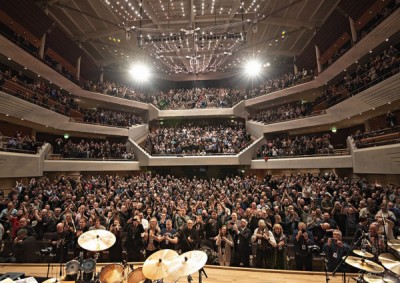 Last Skirmish has established itself as one of the high points at Crimson gigs. A combination of a theme that in some respects foreshadows pieces such as Level Five, it’s a powerhouse track providing opportunities for Mastelotto and Harrison to fire percussive attacks back and forth between scorching bursts by Collins & Jakszyk. 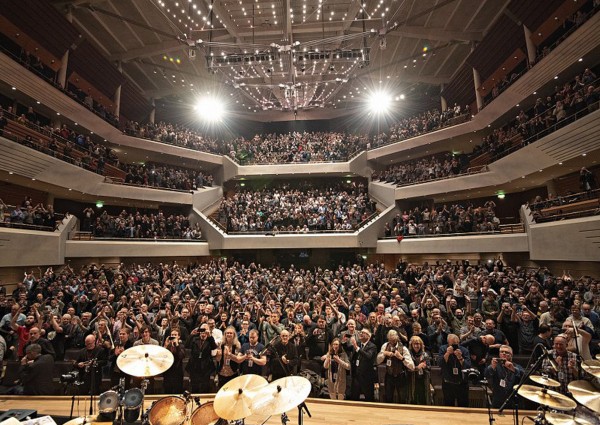 Last Skirmish has established itself as one of the high points at Crimson gigs. A combination of a theme that in some respects foreshadows pieces such as Level Five, it’s a powerhouse track providing opportunities for Mastelotto and Harrison to fire percussive attacks back and forth between scorching bursts by Collins & Jakszyk.

Written by Barry Briscoe
Extraordinary and Terrific Fun
This night that the mighty Crim performed at the Bridgewater Hall I think is going to last long in the memory of most who were present. The venue as lovely as it is, was designed for unamplified orchestras and there is no denying the acoustics gave Crim a rather boomy sound. However, once the sound mix was fixed and one’s ears adjusted to the boomy acoustics, we were rewarded with a truly exhilarating performance. I had seen the pair of shows at The Lowry in 2015 and loved them, but three years later, I was experiencing a very different beast that made the earlier incarnation almost sound like a different band completely. The Crims were on devastating form. It was clear that they were in a great mood as there was plenty of smiles and laughter on stage throughout the entire show. It was therefore stunning to learn the following day that Gavin was ill with bad food poisoning and came close to being unable to play the show. None of us could have guessed as he played as flawlessly as always and it helped explain the comical moment when he began playing a part of his drum solo on an upturned bucket! The eight headed beast roared through the show to intense effect. There were quite a few moments that almost felt like out of body experiences, especially the Meltdown suite which is downright powerful - heavy rock music at it’s finest and most brutal... that went down a storm and the remarkable thing is, most of is genuinely new music written since 2014 and for my money, Level Five or LTIA Pt 5 as it’s now known is one of the greatest most exciting Crimson compositions. The Lizard Suite was another major highlight. This music has a timeless epic quality... whenever it was written, it sounded contemporary and knocked me senseless... the Battle and Last Skirmish were frightening and Prince Rupert’s Lament as eerie as ever - the latter has long been one of my fave Crim pieces and witnessing that played in person felt unbelievable as even in 2015, I never thought we’d see that on stage. The Court medley had two major surprises - first, between Tony and Jeremy’s lovely cadenza’s, Robert added one of his own (was this the first time he did this?) and the coda of the title track was great fun and the song now feels complete with that stirring explosive conclusion. When set one ended I was utterly dazed and breathless, such is the sheer power and force with which this eight headed beast plays. A wonderful audience too, very receptive and a fair few like myself rocking out to it! And how many shows do you see where the band receive a standing ovation before they play a note? One by one - Pat is great fun to watch throughout and the power and passion of his playing is sublime. Jeremy actually played keyboards for at least half the show and what a wonderful musician he is. Gavin is a freak of nature and always interesting to watch him conducting and cueing the rest of the band who in turn enjoy his playing. Mel was having a great time, genuinely happy and playing as he always does - a true master, as is Tony Levin who was exploring and playing differently in each song, taking chances, trying out new ideas keeping it fresh. Bill sits there seemingly poker faced but his fairydusting embellishments add enormously to the overall sound and majesty of the band. Jakko was amazing... he’s come a long way since 2015 and he’s now in his element - his improv scatting in Easy Money was extraordinary as he kept pushing the barriers, aiming for ever higher notes and reaching them. Last but not least, Robert - playing as beautifully and uniquely as ever, looking very proud and happy. Collectively, well... unbelievable and every member a perfect fit, all at home as King Crimson playing this "difficult" music with respect and freshness giving it the full majesty it's always demanded. I also think it’s time the band were properly acknowledged for their sense of humour. It’s always been present but more noticeable now - the drumsons are always great fun to watch and they even had some amusing choreography in one number where all three raised their hands during a pause which had me laughing. I’ve now seen them 4 times and I’ve enjoyed many laughs watching them! Some reviews I've read claim the band are static and not interesting to watch... utter nonsense. They're an absolute joy to watch! A truly outstanding gig, a rollercoaster ride through the history of King Crimson proving they were always ahead of their time and whilst their time truly has come, they remain ahead of their time as there is no other band on this planet that play or sound the way they do and this show had more than ample evidence. As they soaked up the thunderous applause at the end of the show, one could tell they were humbled and honoured. A perfect exchange as I, as an audient was feeling similarly humbled and honoured to have witnessed this staggering show.