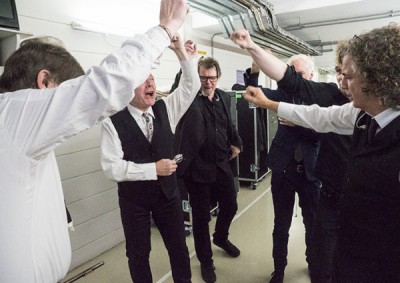 It’s curious how some material from previous line-ups sounded as though they were always waiting for this incarnation of the band to come along and breathe fiery life into it. Already a bulldozing beast when it first appeared with the double duo, played by the seven-headed beast it adopts truly awesome proportions. 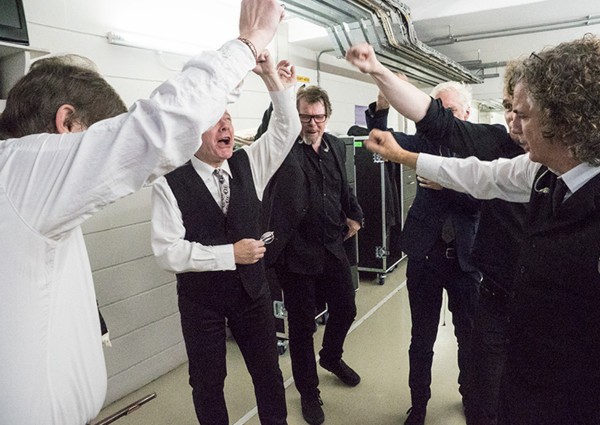 It’s curious how some material from previous line-ups sounded as though they were always waiting for this incarnation of the band to come along and breathe fiery life into it. Already a bulldozing beast when it first appeared with the double duo, played by the seven-headed beast it adopts truly awesome proportions.

Written by Barry Briscoe
Stunning
Having witnessed the previous night high up in the rafters, this night I was sat almost central in the third row of the stalls. Going from a birds eye view to very close up enabled me to see in clear detail so in essence I felt I had the best of both worlds as from my previous view, I could see the drum trio bouncing back and forth whereas this night I was constantly turning my head watching each player in great detail, all the while enjoying a full on stereo effect. Also, the sound was better mixed with Tony more audible - it was politely loud (ie : not earsplitting) and fully dynamic. This night's audience felt very attentive to the degree I recall some songs ending and there would be a pause before we applauded as I think we were just stunned and mesmerised by what was going on in front of us. This was the best gig I've ever attended in my life because it was an experience unlike any I've ever had. Even now, over a year later, I find it hard to try and convey fully how I was feeling as I was immersed in it - it felt like I was taken away someplace. When I exited the theatre, it was a complete shock to return to the world outside. The setlist was brilliant - LTIA Pt 1 went straight into Red and one felt a surge within the audience. It was evident right away this was one of THOSE special nights where everything felt just right as we went along on a journey with the band. Easy Money was THE moment... I'd never experienced anything quite like it as when they went into the improv section, it grew so quiet you could have heard a pin drop and then Robert began playing his solo and the whole atmosphere in the venue grew mysterious. I sensed the presence of the Crimson King... there was a genuinely otherworldliness about it that made me feel very strange. Pat truly impressed me with the ferocity and power of his playing and recall him breaking a stick early on... he was wonderful to observe up close. Bill appeared cool, calm and collected playing the entire show without ever removing his jacket and Gavin... good grief - astonishing virtuosity. Robert was deep in concentration - I'd never seen a guitarist apply powder to his hands before and as the show progressed he grew more relaxed and smiled a fair bit which was a pleasure to see. Jakko as ever worked his balls off and it was fun watching him and Robert working together. Tony delivered a masterclass in invention and then there was Mel playing beautifully and wowing certain people sat around me. A magical moment came when the band came back on for the encore and launched into One More Red Nightmare. That came as a surprise but it was during one section where each drummer took a turn to play a fill where Bill had me laughing out loud as on his turn, he chose to simply grab one of his cymbals and spin it! 21CSM just blew my head away... those stop/start sections felt potent and powerful and after nearly a lifetime of listening to and loving that song, witnessing it in the moment was an experience I'll never forget. There was a lady sat in the front row who was loving every moment, really rocking out and she made an impression on Pat who gave her his drumsticks at the end of the show which I thought was delightful. Quite simply this was the best gig I've ever experienced in my life and yes... it did have a transformative effect that is ongoing. I've not been quite the same person ever since as this show engaged and involved me in ways no other show ever had done - a complete assault on my senses and psyche I'm still trying to understand. The previous night was excellent, but this show was plain outstanding, almost unreal. It was a pleasure and a privilege to be a part of it and I look forward to the day when I'll get to listen to it again. I know a recording/video will only capture so much which is why I urge everyone to seize whatever opportunity they get to experience this band for real, in the moment. Finally Robert's "hot date" and "love letters" analogy made perfect sense.