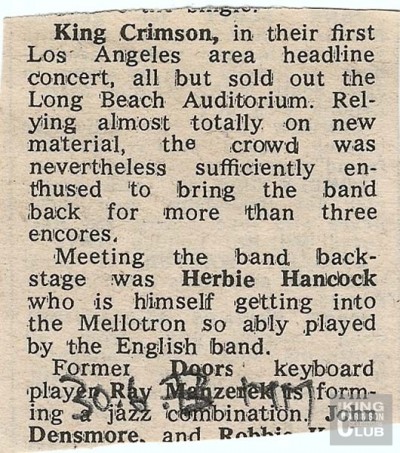 Written by Paul Schulz
DAZED AND CONFUSED
This is a two-part review, spanning 44 years and at least six different iterations of King Crimson. In 1973 I had just graduated high school and only a limited exposure to the rock music world. King Crimson was one of the few bands I did have on vinyl, though only the first four albums. That was critical to my experience on the night of June 17. For some reason I had not yet picked up a copy of Larks’ Tongues in Aspic. My expectation of the show was that I would be hearing songs from those earlier albums. Robert Fripp’s guitar along with some sort of woodwind as the lead instruments, with long Mellotron chords thrown in. Not reading the music press of the time, I had no idea that King Crimson’s line-up had changed. Or what that would mean. Well, that wasn’t what I got. Instead on stage appeared the four-piece version of the LTIA band; no woodwinds, a violinist and Fripp sitting off to stage left on a stool. They opened with a song I had never heard before. Followed by another, and another and another. The stage was dimly light throughout the whole performance, with my memory saying there was a reddish tinge to what background light was there. There may have been a spot used occasionally, but not often. Two mellotrons were set up, but I don’t believe either one was touched that evening. In the end, there was only one song played that I recognized: 21st Century Schizoid Man. It was the encore. When it was over, my reaction to the show was simply WTF. The music was loud and utilized complex rhythms I had never heard before. I was stunned. Or maybe brutalized might be a better term. It took me two years and the Red album to finally be able to process some of what I heard that night. I just wasn’t ready to hear what King Crimson was doing at that point. I believe that Bill Bruford wrote about being with a label executive driving around LA prior to that concert. Some of the LTIA album was played to him. Bruford indicated that the executive’s reaction may have mirrored mine. WTF indeed. I keep hoping that somebody will turn up a bootleg of that Long Beach concert so it can be processed and sold on the DGM website. That way I can have a chance to reevaluate the experience. I did pick up the Berkley concert download from the June 16, 1973 concert. Listening to that recording makes me think Long Beach was probably a pretty good show. Wish I would have had the experience to appreciate it at the time. BTW, the newspaper review provided on the website contains a couple of errors. This was King Crimson’s second headlining concert in the Los Angeles area (the Santa Monica Civic Auditorium show was the first, back in March 1972. That would have been my first rock concert, but I couldn’t borrow a car). And I am almost positive that there was only one encore in Long Beach, not three. I will pick up the second part of this review in 2017, with my experiences with the eight-headed beast in Austin, Texas. Paul Schulz, Katy, Texas