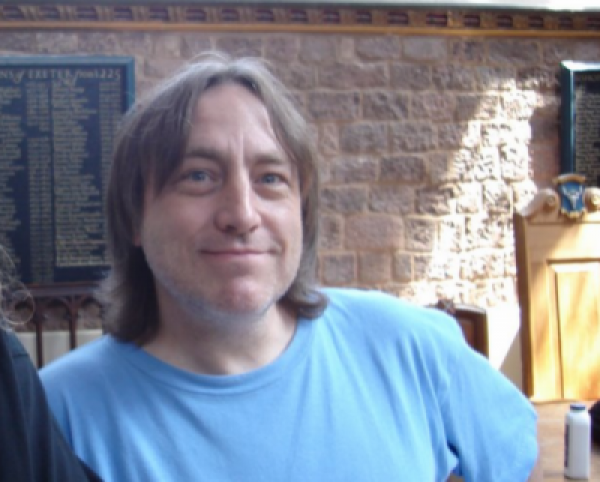 I read today about the passing of John Sinks – and, although I knew him less well than many of those who have posted their memories, I share their shock and sense of loss.

If life is a series of sliding doors – then I share a major sliding door with John. I first started working with Robert Fripp in 1989, when he sacked his live sound engineer just before a tour – and I was recommended as a replacement (despite having mostly worked as a producer, and never as a live sound engineer). I flew out to Seattle, with my only knowledge of the Guitar Craft repertoire being one solitary live recording that I had been sent in advance, from which I hastily scribbled a (fairly inaccurate) score as an aide-memoire for the key moments in the various pieces. On arriving in Seattle, I discovered that there was an “assistant sound engineer/techie” (John Sinks), who helped set up the PA, tune the room, and who stood beside me as I mixed the show. And from the first day, I wondered “why is he not mixing the show?!” He had been involved in Guitar Craft for many years, knew the pieces infinitely better than me, and was more familiar with most of the equipment. The answer, I learned in talking with him, was quite simply that he didn’t think he could do it – although I never once doubted that he could have done. A gifted individual, yet self-effacing. Had John been so slightly different, and how might those doors have slid differently.

Two other great gifts he bestowed upon me:  He was one of the first people to introduce me to many of the works of Eric Satie (what a gift to give someone) , and he also “lent” me his personal copy of the poems of William Blake (another incomparable gift) – now sadly, I suppose, on permanent loan. May he have the peace that he deserves.

As some of you may know, my personal Facebook account was hacked just before Christmas. I have recovered control of “The Vicar” page – but my personal account has been irretrievably deleted by Facebook for “breaking community rules” (I fear the hacker must have posted some heinous items). Learning my lesson about the fragile nature of all things Facebook, I shall therefore be posting my news on “The Vicar” page. I would appreciate it if anyone so inclined could please therefore spread the news that any misguided souls wishing to reconnect with me can find me by “like” The Vicar page, where my thoughts will be found.