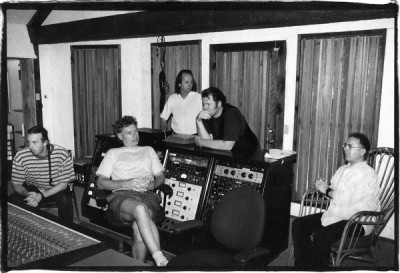 King Crimson lives in different bodies at different times, and the particular form which the group takes changes. When music appears which only King Crimson can play then, sooner or later, King Crimson appears to play the music. The Double Trio, was the fifth live ensemble since the group's birthday on January 13th. 1969 in the basement of the Fulham Palace Cafe, London. The conception of the personnel was January 7th. 1994, and their birthday April 18th. 1994, both in Woodstock, New York.

This King Crimson was a long time in preparation and formation. Music bearing an unmistakable Crimson accent had been flying by my ear since 1986 / 87. At that time I was asked to write the music for the planned film of William Gibson's "Neuromancer" and some of the music, at least, was distinctly Crimsoid. The film fell through before any of the ideas for the group or music developed but it was clear there was music in the air waiting for King Crimson to give it voice.

I took the personal decision to put King Crimson back into action during the second half of 1990 but without a clear idea of how that might be. When Adrian Belew visited me in England during the Summer of 1991, expressing his commitment to the next stage of Crimsonising, the shape became more defined and the intent clear. Tony Levin had also expressed his commitment to the next stage of Crimson with the dry T.Lev aside that "I figure a three year break is fine, but seven years a bit  TOO long".

The picture of a Double Trio formation appeared in a flash while I was driving past our village church towards Salisbury one afternoon in the Autumn of 1992. The double trio was not what I intended, expected, nor wanted but I trusted this point of seeing sufficiently to act upon it. Sometimes it takes time for ideas to come into effect with the risk that the available moment for good ideas may be lost.

The primary reason for the delay between 1991 and 1994 is the dispute and litigation between myself and Messrs. SG Alder and MA Fenwick, the principals of EG Management and formally EG Records and EG Music, who had represented King Crimson and myself since 1969. The principals' financial problems as Lloyd's Names and the collapse of their property company (which went into voluntary liquidation in August 1992) were reflected by their failure to pay outstanding royalties to artists on January 1st. 1991.

Secondary reasons for delay were Tony Levin's commitment to Peter Gabriel, mine to David Sylvian, Adrian Belew's solo career and responsibilities as a producer, and Bill Bruford's involvement with Yes and his continuing management by EG (until April 18th. 1994). These all contributed to delaying the return of Crimson to active duty.

The recording of VROOOM (May 1994) was set as a challenge, with the aim of pulling together six busy musicians to write and rehearse a new and available repertoire. The mini-album is the product of two weeks' rehearsals, three weeks' work overall and is, in effect, the recording of our first rehearsals together. VROOOM was released independently in November 1994 on DGM through Possible Productions in North America, Pinnacle in the UK, Rough Trade in Germany and Benelux, COD Tuxedo in Switzerland, France and Scandinavia, Virgin in Italy and Spain, Pony Canyon in Japan and the Far East.

King Crimson rehearsed for a further two weeks (July 26 - August 6) and flew to Argentina on September 22nd. for one week of rehearsals and two weeks of live work, to play-in both the band and new material. The Double Trio presented King Crimson's formal return to active duty on Saturday 1st. October, 1994 at the Prix d'Ami disco, Buenos Aires. The dress rehearsal the evening before was a poorly kept secret: I suggested to the promoter that he invite his friends to come and listen.  "B'BOOM: Official Bootleg - Live in Argentina" (1995) is King Crimson painted in broad strokes and true to the spirit of one evening during October 1994 at the Broadway Theatre in Buenos Aires as Crimson returned to public performance for the first time in 10 years and 3 months.

The first full studio album since 1984 - THRAK - was recorded and mixed in six weeks at Real World Recording Studios, Box, UK, September 24th. - November 19th., November 28th. - December 4th. 1994. Released April 1995 on DGM through Virgin in North America and Europe, Pony Canyon in Japan and the Far East. 56'39" of songs about love, dying, redemption and mature guys that get erections.

A world concert tour began in Europe at the beginning of May 1995 and continued throughout the rest of the year.  "THRaKaTTaK" (1996) is a compilation of live improvs taken from DAT recordings of the front-of-house mixing desk during the KC tour of Japan and the USA during October and November 1995. This album would have been quite impossible unless the group, through Discipline Global Mobile, were in the position to act on its wilder impulses.

VROOOM  An inevitable and remorseless forward movement which carries everything before it.

Taken from the sleeve notes to VROOOM VROOOM