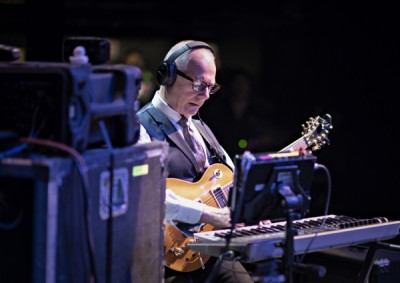 ‘Why don’t King Crimson record a new album?’ Well, they have at a fair few gigs since 2015 and this track is part of that ongoing always in-progress record. Nice to hear some re-voiced keyboard parts from Jeremy Stacey on this tour. 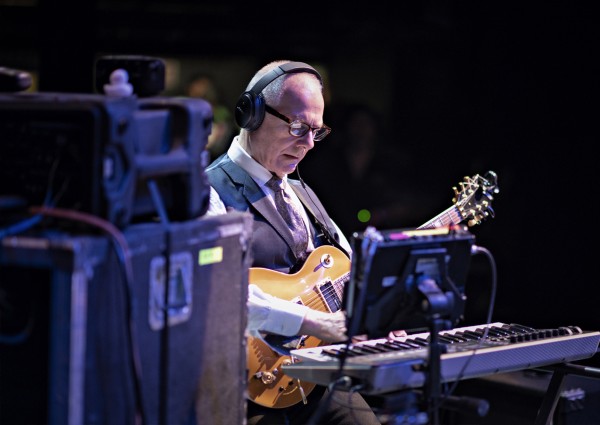 ‘Why don’t King Crimson record a new album?’ Well, they have at a fair few gigs since 2015 and this track is part of that ongoing always in-progress record. Nice to hear some re-voiced keyboard parts from Jeremy Stacey on this tour.

Written by Pablo Cordero
Moctezuma vs. Crimson
The light green color of Gavin’s face and Jakko’s sweaty visage made it clear these two gentlemen were still suffering the consequences of the previous day’s food poisoning, which caused the Friends and Family show of the 22nd to be prematurely finished after one set, but this night struggled manfully to get through a full 3-hour show. The Mexican crowd was typically enthusiastic and Mel, who was in evidently high spirits throughout, playfully teased the audience into singing “Tequila” with his first solo of the night. Red and Epitaph served up a sobering one-two punch of stone cold classics, and then the band plunged headfirst into the dark metallic landscapes of Larks’ IV. One of the guitarists fumbled a section almost to the point of dislodging it, but when it all came together, it was an impressive spectacle. The very last crashing chord of the piece segued seamlessly into the opening keyboards of Cirkus- a neat trick. Elektrik returned- with a vengeance. Pat mentioned before the show that, after the disastrously sloppy performance of the night before, the band ran through the piece several times during soundcheck. They redeemed themselves tonight with a sharp, focused reading of the piece. Having got through this sore spot, everything clicked and the band ended their first set with fiery, powerful performances of Frame by Frame (with a new opening verse so hypnotizing I can no longer listen to the original version without missing it), One More Red Nightmare (I have never heard Jakko sing it better than tonight) and Indiscipline (a masterclass in percussive musicianship). The second set laughed in the face of all who claim this lineup is not making new music, starting off with over 20 minutes of music they have not yet recorded in the studio. Level 5 found Robert going out, way out on a limb on several of his guitar lines. The cadenzas after a gorgeous Moonchild delved into darker territory than last night. After the rhapsodic beauty of Tony’s solo (a highlight of the evening), Robert laid down an agonizing, terrifying series of long guitar notes with a spacey, bitter tone reminiscent of Prince Rupert’s Lament. What a privilege it is to hear one of the best guitarists in the world laying his soul bare for us to see. Jeremy, exceptionally sensitive pianist that he is, followed Robert by playing dark, doom chords on the bass register of his instrument, slowly resolving into the luminous opening lines of an extremely beautiful Islands. After putting on a brave face for so long, Jakko nearly fainted while singing Easy Money. I am not exaggerating; at the end of the high note he sings at the climax of the improvised section, Jakko reeled backwards unsteadily and ran his hands over his face looking pained. Tony looked at him with an alarmed expression until Jakko made his way back to the mic. Starless, gorgeous as it was, found the singer in clear pain, although he managed to come back for a final encore of ITCOCK. A true triumph over adversity. As David Singleton intimated before the show, music can change the world. Intro (Intro (Walk On / Happy Birthday) Set 1 Larks' Tongues in Aspic, Part One (Mexican National Anthem and “… more ) Suitable Grounds For The Blues Red Epitaph Larks' Tongues in Aspic (Part IV) Cirkus EleKtriK Frame by Frame (New Introduction) One More Red Nightmare Indiscipline Set 2 Drumzilla Radical Action III Meltdown Radical Action II Level Five Moonchild (With cadenzas) Islands Easy Money Starless Encore: The Court of the Crimson King (With Coda)