CAPTION COMPETITION!
Posted by Sid Smith on Jun 6, 2007 - This post is archived and may no longer be relevant


Robert and Hernan Nunez are the subject of an interview in Lancion - the website of La Nacion one of the top national newspapers in Argentina.

As you can see from this photograph taken from the article they were both thrilled to be featured.  I’d hate to think what it might look like had they been doing it unwillingly! 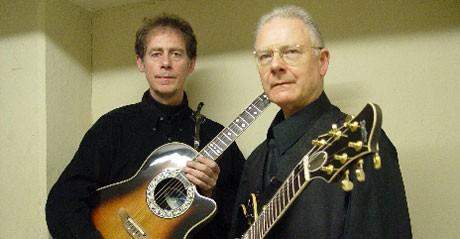 I think we’ll have a caption competition with a prize for the entry that makes me spray me cup of Earl Grey over the PC.  Please start leaving your captions on the guestbook and I’ll announce the winner on Monday 11th.

You can access the original article by heading here but for those who like their reading mangled and squished via the miracles of translation technology, yer tiz...

Scene 1: in the district of Montserrat, a department art deco happened hotel is rallying point of guitarists. At him they were arriving, already almost fifteen days ago, the musicians who tonight will begin in the display cycle in the ND/Ateneo, after to have made concerts in Rosary and Mendoza.

Hernán Núñez, the Argentinean who has been living in Berlin for several years, is the one who receive, take care of and answers questions to try to explain the particular experience of this troupe andante of guitarists.

In the kitchen, there just, Robert Fripp a tea is prepared, orders a little and it approaches to salute. "Thanks to maintain the interest in which we do", say before going away to sleep, overcome by the jet lag of the trip from England and the test that worked like welcome. And it is clear that it will not have nothing else, that that night will be Núñez the one in charge to transmit projects and realities. Fripp flock of the center.

Scene 2: days later, the musician who knew to give form to that other particular called experience King Crimson accepts an encounter with the local press. After a small show, in which their electrical guitar and his soundscapes were added to eleven unplugged of Liga (and the time he was another one, and afternoon fry was left outside and very far between sounds and dancing notes) Fripp answered questions that requested that they were not "professional" but ardent, questions that burned. Questions inspired by the passion.

And it was his passion, the passion by music, the one that also shone. Not only in that previous show, but also in its answers. Thus, consulted by discs or the artists who had marked it in their beginning, it spoke of Presley ("with Scotty Moore", it needed like good guitarist), that it hit it to the 11 years, and of the traditional jazz and the modern one, that followed. But it went to the 21, it said, when the change of life took place, when one night, when returning to touch ("in a band of hotel, three times per week in winter, four in summer, and Sundays in a night club"), listened to in the radio "a frightful music; it was Sgt. Pepper ", it counts, and it accompanies with gesticulaciones so that still it was left the effect of those sounds in him clearer. "Until then, I still studied to turn to me a real estate agent. But no longer he would be thus."

Putting music in the first place, requesting passion in the questions, Robert Fripp he manages to scribble themselves, to run themselves of the center, to be stumped without losing the center. Thus its present activity can be understood, based mainly on the courses of Guitar Craft and the concerts live. "I can say that Guitar Craft is my true work in the life. And that, in any case, King Crimson was a necessary training so that Guitar Craft was possible. It can have had value in itself, but that one is the fundamental value."

It was not the only reference to the band that he began in 1969 and which, like few, he crossed decades without resting in the fact. Before the direct question about projects and futures, he was almost final. Or terminal. perhaps "So far there are no plans for King Crimson, his time has happened - it said, with that style british and of sagas and stories of times so so gone -, because although he was something professional, that one never was the objective of King Crimson. And that moment of the world already happened." Soon to add that, sure the door never is closed absolutely, or that the door can vary: "If it appears a music that only can be touched by King Crimson, then we will have to return to speak".

So far, it is here, to act next to the eleven guitarists (9 Argentineans, a Spanish and a Mexican) who integrate The League of Crafty Guitarists. And because, it will say, "in Argentina still is passion", although, it adds, this one does not seem a very brilliant play for an artistic race.

"To be able to just put a note in the appropriate place in the time." Thus, Hernán Núñez synthesized the necessary thing to integrate this peculiar group. "Many think that it happens through the virtuosity, but we do not go being the acrobats of the tuning fork nor the disciples of the crimson king. The point is to be wide-awake. And that the group is virtuous." And it adds that they are those that, after doing some of the introductorios courses (like which several times in Argentina were dictated) participate in residential, in that the training is the more intensive and the duration, most extensive one.

Those that they will have to his position the task of putting notes in the concerts in the Athenian are, in addition to also musical director Hernán, Mariana Scaravilli, Ignacio Furones, Fernando Kabusacki, Claudius Lafalce, Ignacio Gracián, Martin Schwutke, Jorge Seville, Carolina Tonnelier, Leonardo Requejo and Luciano Pietrafesa. Iran, like always, without network. Without record producer, discs nor. To pure risk. To pure passion by music.