THE LAST BOOK I READ...DAVID CUNNINGHAM
Posted by Sid Smith on Oct 24, 2006 - This post is archived and may no longer be relevant

When he’s not conceiving some genre-blurring audio installation producer / musician David Cunningham, likes to finish a book – no matter how long it takes him.  There are exceptions to the rule, particularly after his cat has peed on one discarded tome, but generally our man Cunningham doggedly pursues a book till it’s dog-eared.

Best known to the Crim community for his collaboration with Michael Giles and Jamie Muir on the soundtrack album, Ghost Dance, the wider world will know of his work as producer of many Michael Nyman soundtracks (most famously perhaps for Peter Greenaway’s The Draughtsman’s Contract) and even avant popsters, The Flying Lizards, for whom a certain guitarist from Dorset made a guest appearance.

The narrative and setting - Foxy-T and her friend Ruji-Babes run the E-Z Call Telephone and Internet shop in the mostly Bangladeshi community in Whitechapel, a part of London historically ridden by crime and poverty.  The narrative tells of the dysfunctional hermetic relationship between the two women in the shop and the inevitable intrusion of the equally or even more dysfunctional outside world, delusional love, low level crime (with a bit more serious crime near the end).

Simply to describe "Foxy-T" as some sort of dull urban soap opera is totally misleading, there’s a strong element of "I couldn’t put it down", built into this book.
Partly because the author has written it in one whole chunk of text, no chapters, so there’s no chance of - "I’ll just read to the end of this chapter and go and do something else".  Aside from that structural ploy or play (which is maybe more significant than I have yet figured out) the narrative has an insistent drive based on a level of obsessive observation a bit like (but structurally different to) the better (earlier, crazier) work of Nicholson Baker. 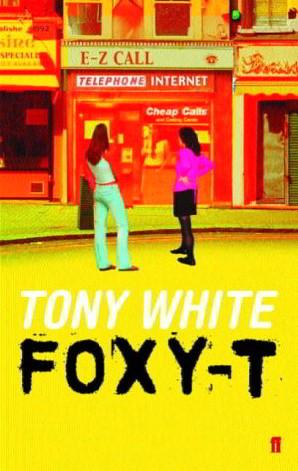 Michael Moorcock has written "Tony White has always had his finger on the vulgar pulse..."  I admire this, couldn’t have put it better and this book goes much further than just looking at a supposed bit of low culture - this is a London book, a genre or sub-genre which includes Ian Sinclair, Martin Amis, Peter Ackroyd, Victor Headley, Colin MacInnes and most significantly in this context, Monica Ali.

Foxy-T’s world is a detailed examination of a significant fragment of the background of Ali’s "Brick Lane".  This is not to diminish this book as some kind of footnote to another fine work - it’s just the second time (in a fiction) that someone has looked intelligently at what happens here.

I live in the locality in which the book is set and recognise the disparity between the current top-down vision of some homogenous British Muslim community and the diversity of these disparate communities and subcultures, a central aspect of both "Foxy-T" and "Brick Lane".  The significant of this seems to be even more pertinent day by day in what is being called "the current climate". Interesting that the central figure in both books is a woman.

I share with Anthony Burgess an extreme dislike of a lot of 20th century English novels - Burgess described the genre as "a divorce in Hampstead" - something terribly inward looking, living in a small world.  Set in a microcosm of Whitechapel (in this century), perhaps the exotica of the neighbourhood, perhaps an inevitable sense of a bigger world just at the edge of the concerns of most of the characters or perhaps the language itself lift Foxy-T out of this grim little world.

Some some extent it’s a class thing.  Burgess would have relished the phonetic rendition of current Whitechapel English although probably would have had a minor whinge about the lack of Bengali loanwords.  There’s some closely observed English slang mobility, init.  (I have my own theory about ’init’ – an anglicised homophone of the Greek verb "to be" brought to us by kebab vendors but that’s not really relevant here).

To very roughly paraphrase Chomsky: language is not an intellectual construct, it is a generative structure and the property of the people. Linguistically solid, Tony White should also be nominated for the Ian Dury award for zero use of fake Cockney rhyming slang.