Orchestral Soundscapes In London
ORCHESTRAL SOUNDSCAPES IN LONDON
Posted by Sid Smith on Sep 18, 2013 - This post is archived and may no longer be relevant

The rarity of such performances means this is really not a date to be missed for soundscape fans. The evening also features the stunning Twelve Hours of Sunset by the late, great David Bedford and composer Murray Gold, best known for his work on the long-running children's TV series, Dr.Who.

The album is available from Burning Shed and Inner Knot.
The Wine Of Silence orchestral soundscapes were last performed in Amsterdam in May 2012 and you can read Robert's view of the event and my take on the concert over on the blog.

Meanwhile, Andrew's guides to the music of King Crimson and Robert Fripp has been reviewed in the pages of Prog magazine. 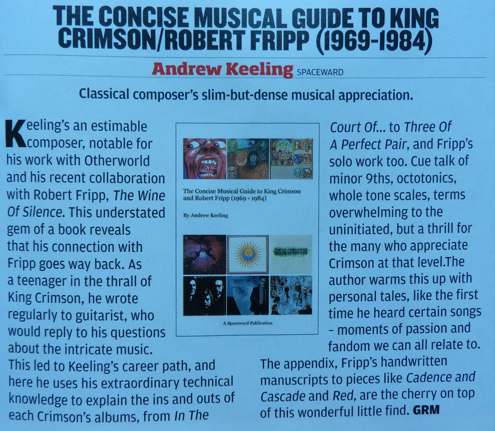 You can order this and other guides directly from Spaceward as well as take a look at Andrew's various musical projects here and take a peek at Andrew's blog here.