The legendary appearance of King Crimson miming to Cat Food on Top of the Pops has been recovered by the BBC.

The DGMLie team were well and truly flabbergasted with news a fortnight ago* that this piece of vintage KC, missing presumed lost, had been retrieved.

Although the band is only lip-synching the date is important because it is the only known footage of Giles, Giles, Fripp, Lake and Tippett on stage together. Readers will know that this was a special one-off grouping pulled together to promote the single.

As detailed in my blog I was able to go down to London at short notice to view the footage following a tip-off from a site visitor (who wishes to remain anonymous for the moment) and BBC employee.

As with many old items of TV history its discovery is pure fluke.  Here’s how it happened.

It seems the BBC had been contacted by the relatives of someone who had an attic full of ancient video tapes (see here for the full story).  Although the tapes were initially thought to be duplicates and thus worthless, they were nevertheless retained for future reference.

It wasn’t until a researcher for the BBC show Treasure Hunt diligently spooled through all the material that fragments of Juke Box Jury and Top Of The Pops were found.

After the tip-off I immediately contacted the BBC and eventually spoke to Paul Fiander’s (head of BBC Information and Archives) office to see what we could find out.

Eventually, an incredibly helpful production assistant over at Treasure Hunt (thank you Vicky) contacted me to confirm that it was the date we were interested in - 25th March 1970.  More than that she said an internal screening for various in-house producers and BBC Enterprises had been organised – would I like to pop along?   Vicky of course assumed I lived in London.

So, one Easyjet later I found myself (thanks to our mutual friend who had tipped us off in the first place) watching fragments of various light entertainment shows long forgotten (Billy Cotton Bandshow anyone?) and eventually three fragments of Top of The Pops.

The old chap who’d been taping the shows had a distressing habit of only pressing record for the songs he liked and although the transmission date was the right one there was no guarantee that KC would be featured.

To my astonishment I saw Jimmy Saville announce “ Now ‘ow’s about some King Crimson Cat Food, guys and gals?” whilst moving his hands in clawing cat gesture. The next pair of hands I saw belonged to Keith Tippett busily scampering over the keys of TotP’s upright house piano.  Then to Greg Lake singing the first verse. From there the camera shot pulled back from the blazing eye motif of Michael Giles’ drumkit. 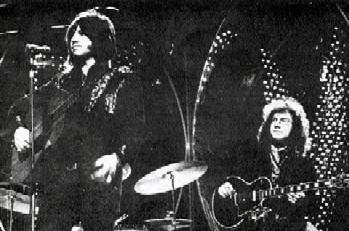 The bad news was that the song didn’t go down well with the taper, who after a minute and a half pressed STOP.  Nevertheless, to be able to see this material at all was simply amazing.

It was grainy and there were some momentary audio drop-outs but such irritations are nothing compared to the sheer thrill of seeing this group of young men (and boy did they look young!) performing on a TV studio stage.

Outside I phoned Robert at his Bredonborough home to report back on what I’d seen.  He had been intending to go but was so ill with his Devil Bug he hadn’t been able to make it. Needless to say David is busily negotiating the rights for inclusion as a download on DGMLie

* We’d been asked to observe the embargo until the BBC’s announcement about the material scheduled to take place on April 1st..