BOZ BURRELL HAS DIED
Posted by Sid Smith on Sep 22, 2006 - This post is archived and may no longer be relevant

Details are now coming in surrounding the untimely death of ex-King Crimson singer and bassist, Boz Burrell who passed away yesterday.

I spoke to guitarist Neil Warden who told me that Boz had died at his Spanish home in Puerto Banus, Marbella, and not Edinburgh as had previously been reported.

Singer Tam White with friend Billy had been visiting Boz, and all three were ready to go out to a small party to play a few tunes with some friends.

Neil went on to say “Tam was sitting in Boz’s apartment singing when Boz picked up a guitar and sat back in his seat, and slumped over and passed away.  Efforts were made to revive him before the emergency services arrived but no luck.”

Neil went on to pay tribute to his fellow musician and friend.

"Very sad, I’m very upset to say the least. Boz was one of the good guys, I’ll never forget that impish smile and crazy humor, a sad loss indeed. I used to stand next to him on stage in ’The Groove Connection’ and have a great laugh.

He was a great musician and a cool guy to say the least. He was like a long lost older brother to me; we were both into the same music and hit it off from first meeting.

A sad loss indeed. I can’t stop thinking of him at present; my heart goes out to Kath his wife.”

Neil understands that the funeral will be held in Edinburgh although clearly no date has been set.

We’ve set up a tribute page on the site where people can offer their thoughts and memories of Boz, and where you can download a free remix of the studio version of Ladies of the Road that was done at the time of the FxF box set but unused. 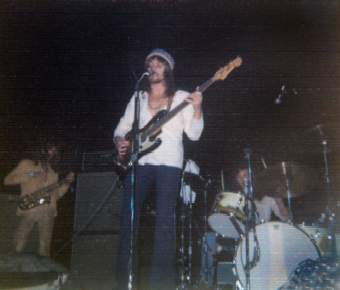 Boz on stage with Mel and Ian - their final gig with Crimson on April 1st, 1972 at the Municipal Auditorium, Birmingham, Alabama
(photo by Chuck Bryant)
I’ve added my own thoughts on Boz and his passing over on the blog.