Live In Chicago
LIVE IN CHICAGO
Posted by Sid Smith on Nov 10, 2017 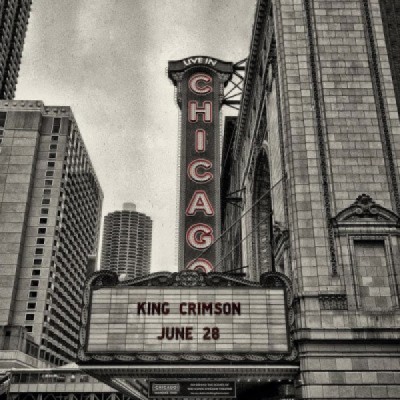 King Crimson’s Live In Chicago has been exciting the ears of a few folks in recent weeks. Here’s a roundup of some reviews you may have missed.
First up is a German-language review… 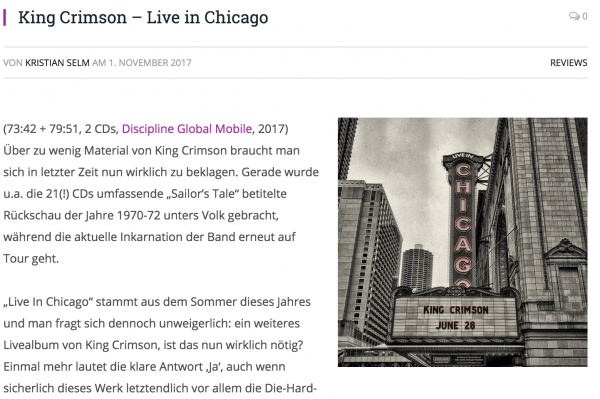 For those who don’t speak German, here’s a handy cut-out-and-keep translation…

Lately, there is not enough material left over from King Crimson to complain about. The 21 (!) CDs comprehensive "Sailor's Tale" titled retrospective of the years 1970-72 has just been released among the people, while the current incarnation of the band goes on tour again.

"Live In Chicago" is from the summer of this year and one wonders, inevitably: another live album by King Crimson, is that really necessary? Once again, the clear answer is 'yes', even though this work will surely inspire the band's die-hard fans. Since 2015 several live releases of the band have already been released by Robert Fripp (2015: "Live At The Orpheum", 2016: " Live In Toronto " and "Radical Action To Unseat The Hold Of The Monkey Mind", 2017: "Heroes EP") Japan Import "Live In Vienna"), so that "Live In Chicago" means another sequel to the current reincarnation with three (!) Drummers.
Featuring Robert Fripp (guitar, keyboards), Mel Collins (saxophone, flute), Gavin Harrison (drums), Jakko Jakszyk(guitar, flute, vocals), Tony Levin (bass, stick, vocals), Pat Mastelotto (drums) , Bill Rieflin (keyboards), Jeremy Stacey(Drums, keyboards) this recording was made on the last US tour. Especially in comparison with the other records of the last few years, one notices that one increasingly deals with the classics of the 70s, but in addition to certain song constants in the setlist such as 'Starless', '21st Century Schizoid Man', 'Easy Money' 'Lark's Tongues In Aspic I' or 'Pictures Of A City', each live recording spans a stimulating variation on the setlist, featuring a mix of early song pearls as well as completely new or rarely played material (this time including 80s material, Neurotica 'and 'Indiscipline').

For example, the material of "Lizard" (1970), which you get to hear in slightly modified versions, surprises on 'Live In Chicago' in the first place. The melancholic, somewhat sentimental, but equally powerful, circus 'as well as a condensed, very dynamic interpretation of' Lizard 'under the name, The Lizard Suite' make it clear once again that the current 8-piece band is not just the past as a 1: 1 reproduction celebrates, but one gives the music always new facets. In addition to the six-armed drum monster, it is once again Mel Collins who, with his variable saxophone and flute inlays, gives the music another side. The David Bowie Classics 'Heroes' - in which Robert Fripp in the original contributed the significant guitar lines - is also a fitting bow to a great, unfortunately too early died artist of our time.

After already the last outputs included new titles again and again - this time celebrates 'The Errors' its premiere - one wonders, of course, inevitably, when finally a new studio album will appear. But just as one knows Robert Fripp's unpredictability, he will already recognize the right moment when, from his point of view, the right time has come.

Next up, in a numbers-heavy account of the new album, JP’s music blog says “This set is filled with epic songs (10-minute "Pictures Of A City" & 14-minute "Starless") that allows you to get lost in the moment of these performances “ 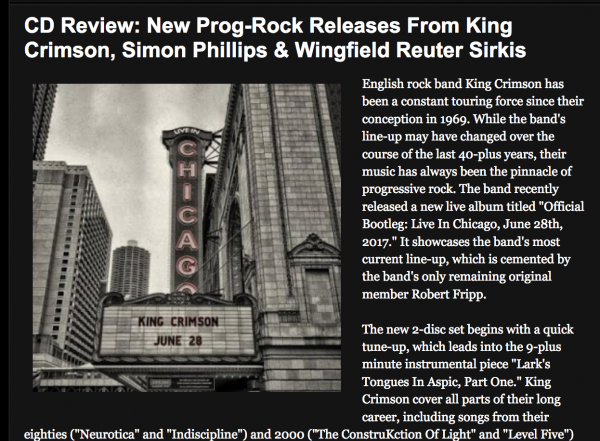 Another blogger is particularly impressed with the Lizard-era material, saying “For me, the highlights of these 21 tracks has to include the brilliant 'Cirkus,' a track that once the piano and mellotron's come together to change its musical point of origin, still sends shivers down my spine. It's also here where lead vocalist, Jakko M. Jakszyk's voice is at its best, for he not only delivers the vocals with power, but supersedes those of original songster Gordon Haskell.”

Blogger Zach Nathanson is enamoured with what he describes as the “experimental yet futuristic tribal atmosphere” of Live In Chicago.

Finally, although we’ve run this one before, here’s John Kelman’s insightful overview of what went down in Chicago… 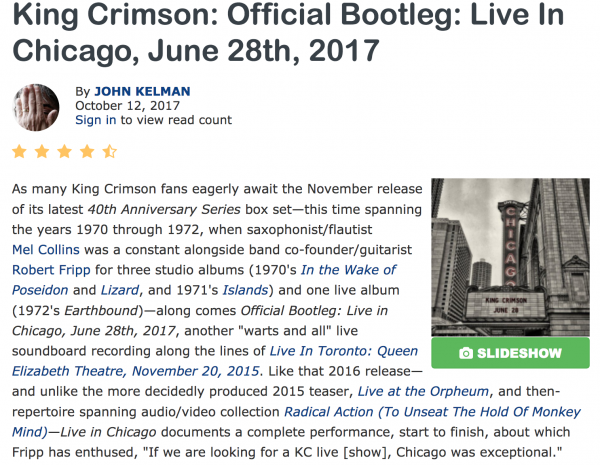