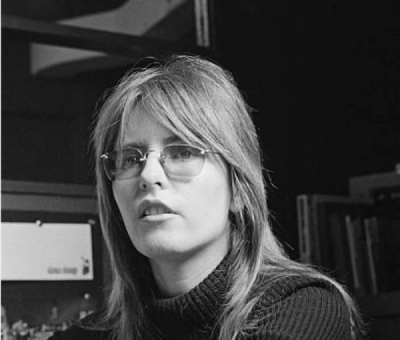 The passing of vocalist Judy Dyble has been announced today. Earlier this year she revealed she was receiving chemotherapy for lung cancer. The original singer with Fairport Convention, Judy later became a brief member of Giles, Giles & Fripp in the summer of 1968 and recorded the first version of I Talk To The Wind. This track was later released on the 1976 compilation, The Young Person's Guide To King Crimson, and more sessions from her time with GG&F were released in the 2001 anthology, The Brondesbury Tapes.

In 1971 Dyble married DJ and music journalist, Simon Stable, who had been an early supporter of King Crimson during 1969. During 1971 Dyble, worked in reception at Command Studios. The couple also took in lodgers at their house including Ian Wallace and for the time around the recording of Islands, Robert Fripp. “He moved into our flat, filled up the fridge with melons and told us off for using coloured toilet paper,” she laughs. Judy also revealed that Fripp would occasionally join them in a card game called Spite and Malice. “It’s a bit like double-handed Patience. You can really throw your opposition by fouling their next move sonf Robert was really very good at it. He was vicious and would really knock you off the board. He was very private but his eyes would light up when you’d say ‘Spite and Malice?’”

She co-founded a tape duplicating firm, Somewhere Else with Stable which they ran until Stable’s death in 1994. In March 1997 she attended the Epitaph playback celebrating the original KC lineup and was reunited with Ian McDonald and others from the period.

She mentioned to McDonald that she had received am offer to play with Fairport Convention at their Cropredy Festival in August for the first time since she’d parted company with the band nearly 30 years previously. “I was unsure about doing it after so long but Ian said to me ‘you’ve got to do it!’ and he even rang me from New York afterward to tell me to do it. But if I hadn’t have gone to that playback and talked to the people there I’m not sure I would have done the Fairport thing again.”

Judy crossed musical paths once again with Fripp when his soundscapes were used on Judy's 2004 album, Enchanted Garden and later on 2009's Talking With Strangers which also featured contributions from Ian McDonald and Pat Mastelotto.

Just a few days ago it was announced a new collaboration between Judy and Big Big Train singer, David Longdon entitled Between A Breath And A Breath will be released in September 2020.