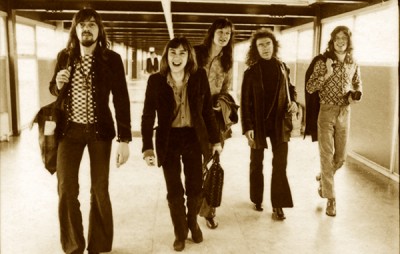 On this date 48 years ago, Islands, the fourth album by King Crimson was released. The only studio album to feature Fripp, Mel Collins, Ian Wallace Boz, and Peter Sinfield, it was laid down in series of guerilla-style raids in between their gigs around the UK at London's Command Studios. 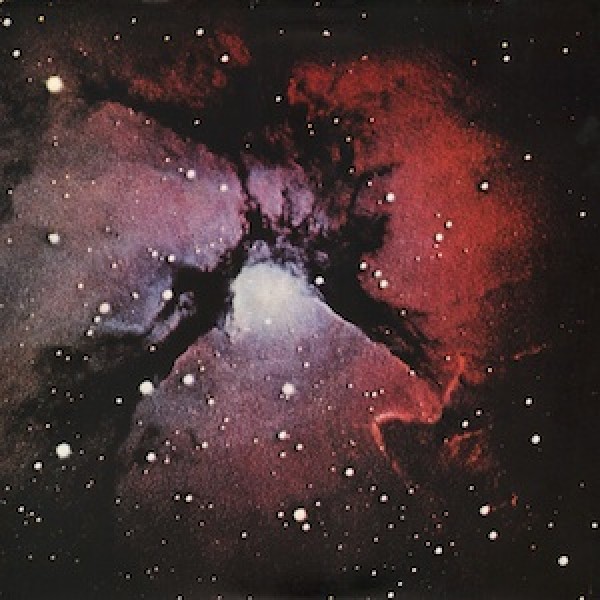 The bulk of Islands was recorded in  September, with most of the overdubbing and mixing completed in early October. “It is difficult to convey the level of exhaustion during this last week” explains Fripp.  “I’d get home about 3-4 in the morning from the studio, pull out a pencil and write orchestral parts for Song Of The Gulls, before getting to bed anywhere between six and eight. Up around ten to leave for the studio for noon. The final night began around 18:00 and never ended for me — Peter bailed in the early hours and I carried on. Richard Williams came in to listen to the playback/run-through the following late morning, then the van arrived after lunch. I got in, fell asleep, we drove to the first show of the tour, and I woke up shortly before we arrived.”

The final night that Fripp refers to was the same evening that overdubbing on Sailor’s Tale was finished. “The solo was, and is, from some other world” notes Fripp. “Technically, the right hand could only have been developed by someone familiar with the banjo. My connection to this was through Don Strike (his old guitar tutor in Bournemouth). Other references would include Sonny Sharrock (notably with Herbie Mann) and the idea of Peter Townshend’s flailing. And maybe a subversion/perversion of early Scotty Moore, with echo delay, at the Sun sessions. But none of this seems relevant somehow. Late at night, faced with a solo to be played, for which there was no solo available, something happened: a young guitar player was confronted by necessity. And then something remarkable happened…”

There are many stand-out moments on this curiously schizophrenic album; Formentera Lady’s laid-back sunny dreamscapes (Peter Sinfield’s lyrics inspired by his recent holidays in the Balearic Islands); the free-jazz tussle within The Letters’ chilling melodrama; the skewed, mutant blues guitar licks and raucous sax of Ladies of the Road; the genteel classic music climes of Song of the Gulls; the emotional reverie of the title track.

If Lizard represented a wild party between rock the UK jazz scene, Islands was more akin to a gentle gathering.  Though he’s woefully underused on Formentera Lady, Harry Miller was one of the most gifted bassists of his generation who at the time of this recording was founding his own independent record label, Ogun. Along with Keith Tippett’s delicate additions on the title track comes his cornet player, Mark Charig, whose free-flowing cornet playing, backed by Fripp’s folksy harmonium, lends a poignant warmth to the stirring coda.

However, it’s the Sailor’s Tale which arguably overshadows everything. The solo makes a break with the symphonic and jazz-inspired leanings of previous albums, clawing its way into a spikier, fractious, metal-edged territory. It’s the sound of Fripp hammering out a new map of where he wanted to explore next.

As part of King Crimson's 50th-anniversary celebrations, an early version and previously unreleased alternative guitar take of Sailor's Tales was released. It revealed some of the thinking that was going into the approach the guitar might take. In his introduction to the track, David Singleton makes reference to an unidentified pianist on the track. This would have been Jules Ruben, the father of Peter Sinfield's then-girlfriend, Stephanie Ruben.  Jules had enjoyed a busy career as a pianist and was no stranger to recording, as this website, written and curated by Stephanie explains. He was initially brought in to play on Formentera Lady and it's likely that he had an attempt to play Sailor's Tale. In the end, Jules' contributions weren't what the Crims were looking for and were abandoned when Keith Tippett was drafted in.

Press reaction in the UK to the album was mixed. Sounds lauded Islands for its "rare sense of ease and grace," hailing it as a "Great Leap Forward”. Melody Maker’s Richard Williams also regarded the album as something of a departure, congratulating Crimson on the summery warmth of "Formentera Lady". "At this point," Williams warned the potential buyer, "you may even be wondering if the shop assistant gave you the right album. But you'll be enjoying it." The New Musical Express heaped praise upon Formentera Lady, saying “Peter Sinfield wrote the song after the inspiration of summer holiday on the Spanish island and, while his lyrics provoke the feeling of dusty roads and sun charred villas, Fripp’s lengthy coda at the end lifts the piece out of the context of the island and Spain and into its place in the cosmos. It’s an evocative piece.” However, the reviewer offers this verdict: “Islands confirms a growing belief that Crimson have evolved into a skillful but somehow cold and dispassionate band. Warmth is what’s needed.”

"Heaven's sea" as mentioned in the title track was also given a graphic depiction on the album sleeve. Having previously involved another artist in the commissioning of album covers, Peter Sinfield was the sole executor of that task. In the UK the album was presented in an unmarked single sleeve with a photograph of the Trifid Nebula in the constellation of Sagittarius. 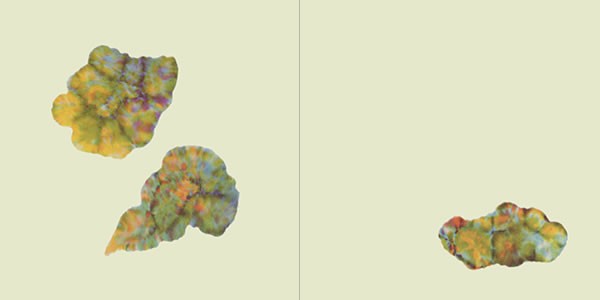 The inner cream-coloured gatefold featured delicate islands created by Sinfield's patented method of food dye on blotting paper. Inside there was a Sinfield collage of five individual portraits and three group shots of the band in concert, the first time any band photographs had ever appeared on a King Crimson album sleeve. 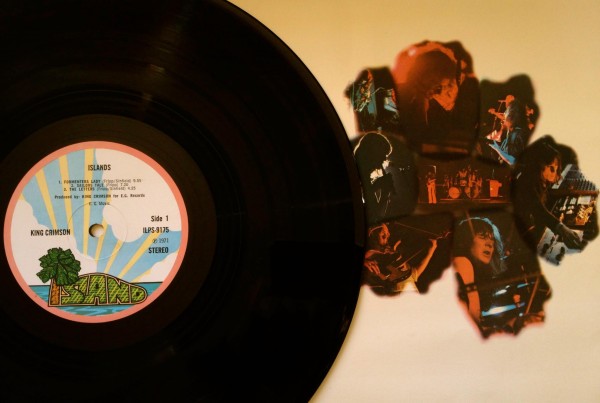 Following his remix of the album in 2010 as part of the 40th Anniversary series, Steven Wilson noted, “I always thought of Lizard and Islands as being of a pair in a way but when you sit down and start working with the tapes, you realise they are completely different things, mainly because of the economy and the space in the recording of Islands. It has a quite, stately beauty and elegance about it that you do appreciate the more you hear it. With Islands you’ve got the two tracks at either end of the record which are very spacious and jazz-like, and then you’ve got probably the most macho thing King Crimson ever did in the middle of the record followed by an orchestral piece! It’s possibly the most diverse record they ever made.” 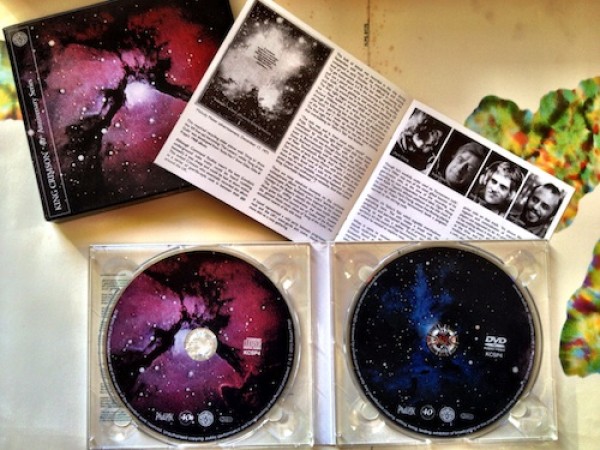 The 40th anniversary edition series release of Islands in 2010 contained 90 minutes of additional material, the vast majority of it previously unreleased, including many studio takes mixed from the original recording sessions specifically for this release. The material covers everything from early rehearsals of Pictures of a City (one of the final new songs performed by the 1969 lineup) to the previously unheard A Peacemaking Stint Unrolls (showcasing early ideas & elements that would appear in fully realised form on Larks' Tongues In Aspic and Starless And Bible Black), a fragment of Fripp playing the title track on a mellotron, a blistering Sailor's Tale live from the Zoom Club and many more previously unreleased gems.