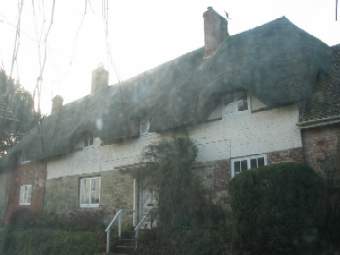 A little blue creeping into the sky…

Mary Pearce is listening to a reading-book of this, and enjoying it. As one of the waiting-to-be-read volumes on the shelves of my home study, I agreed to read it so Mary & I can share a good chortle discussing it on the next tea & cakes visit to Wantage.

A busy morning at Mobile the Global Disciplines. A letter has been written to our Bredonborough MP, complaining formally about BT’s inability to address its failure in service. Breakdowns are acceptable - hey! things go wrong! This is not a problem, only a difficulty. But appalling service & the utter failure to speedily address a problem – this a problem & is unacceptable.

Discussion with David re: mucho developments within DGM Live. We are preparing the first franchise-model of the DGM Live website. DGM Live is now at a point where other artists can use the infrastructure (backend) of the site for their own adventures by bolting-on their own shopfront.

Another arising: a new contract from PPL which includes a new media clause authorising PPL to act on our behalf in all media including, for example, YouTube. The clause effectively binds DGM to accept the terms PPL agrees, although PPL isn’t able to say what the terms will be.

One problem with this is the relationship between the four majors, who control c. 70% of recorded music, & YouTube. The majors seem to be moving towards shareholding interests, and/or sharing advertising revenue, in exchange for making available their catalogue. So, do the major record companies, also shareholders & revenue-sharers in YouTube, make deals as “content-providers” advantage or revenue sharing shareholders? And, as “content providers”, do the majors address their responsibilities towards artists? A deal which allows access to catalogues in exchange for shares/advertising income doesn’t quite equate to artist royalties.

David pointed out the conflict of interest. The man from PPL wasn’t able to comment. 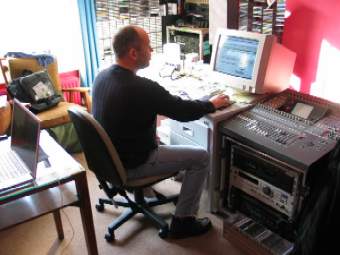 Alex holds up the master of KC at The Pier, NYC, 1982. Alex is not sure when it will become available, but the sonic side is ready… 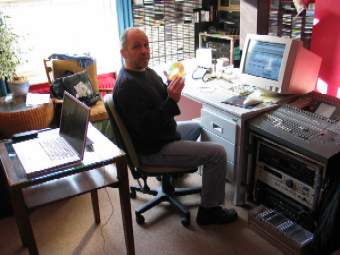 11.17 At The End Of Time from Broad Chalke. This is as close to a complete presentation of what the player intends as, in a fallen world & the limitations of talent, musicality & inwit, I might presently hope for.

Off to Vauxhall necromancy centre in Salisbury, hoping to revitalise the car radio seized on safe. This is a bright idea to deter theft of car sound systems. Then, to Bournemouth.

19.01       Back to DGM from Bournemouth. John Wetton called along the way, still busy in a Southampton studio, and unable to meet for tea. So, all the cakes being carried from DGM (or MGD) have returned to the DGM kitchen for pumping down by the workers.

The car radio continues refusing to accept the code. Pooey pooey. Much of my professional listening takes place while driving.

Meanwhile, this might be filed under the perils of translation…

The Fripp young person begins the study of the guitar prevailing itself a method that will accompany it for all the life and that it is reflected in the greater part of its compositions, contraddistinte from cues of remarkable virtuosismo and marked ecletticità, with references to classic music, contemporary and ethnic music.

In 1969 I found with Greg Lake, Mike Giles, Ian McDonald and the poet Pete Sinfield the King Crimson, one of the maximums you concern to us created you of music POP after the Beatles. In 1970, after that Greg Lake leaves the group, of it she becomes leader, imposing to band a carried out more they experiments and atonal.

Beyond to its activity inside of the several incarnations of the King Crimson, in which it is the only always present member, Robert Fripp collaborates with musicians like Brian Eno (with to which she has invented and perfected the technique she dictates Frippertronics), David Bowie, Peter Gabriel, Peter Hammill and Andy Summers.

In 1974 he melts the King Crimson and he under consideration dedicates the three years succeeded you of the disciplines of Georges Ivanovitch Gurdjieff.

In the 1977 one moves in an apartment of Berlin with David Bowie and Brian Eno and entirety records Heroes. In the two years succeeded there is to New York where it records its first disc from solista, Exposure. From 1981 to 1984 album with reformed the King Crimson records three and proceeds therefore, from 1985, to the formation of the own school of guitar, for which it studies and standard a completely new approach to the instrument, saying Guitar Craft: a connubio between musical discipline, techniques yoga and the Alexander method adopted from the recitazione schools.

In 1994 I found one new incarnation of the King Crimson with which - also with variations in the organic one - it continues to play and to record album.

The chitarristica technique of Fripp, above all with the guitar electrical worker, is not founded on the blues, like in the event of others celebrates English solisti (from Eric Clapton to Ritchie Blackmore, from Jeff Beck to Jimmy Page), but on one a personal mix of classic music and jazzistiche suggestions (than they are found more than in the fraseggio, in the melodico-harmonic choices). There is then an incessant search of new technical solutions for that it regards the elaboration electronic of the sound; very famous the Frippertronics system, based on the passage of the sound of the guitar on a ring of magnetic tape that passes through two recorders to Revox coils couples to you, so as to to be able to create complexes polifonici carpets in constant metamorphosis. Fripp is sure one of the strumentisti ones more originates them and sophisticated in the history of the guitar electrical worker, and undoubtedly one of more imitates to you.

20.04       This guitar electrical worker is now e-flurrying & listening to today’s Churchscapes compilation. An e-mail from an informed industry insider…

Once you see people saying things like "we respect copyright..", "we tried to contact the owners...", "don’t upload copyright material...", you know they’re either:

c)            the latest buzz site on the Internet about to be bought by some ’old world’ media giant for zillions of dollars even thought they’ve no assets, at which point they’ll say.. "we’ve always been ready & willing to talk to copyright owners about proper use of their material...."

Cruel experience demonstrates that, once an action is initiated & undertaken which rips the artist, most of the effort & expense involved by the artist taking action in response is, commonly, disproportionate to any material benefit. This, to a hardball initiator of the rip-off, is taken as given. Therefore, counter-action by an aggrieved artist is likely to be driven by principle rather than a rational profit-and-loss calculation. For the violator, the rule is this: beware the pissy artist - they are unhinged, irrational & unable to see industry reason.

The two primary measures available to the artist are:

1.             Withdrawal of labour. This is a hard strategy for both young & aspiring professionals, and mature & successful artists.

2.             Access to publicity. EG never recovered from being on the front page of Music Week for 4 consecutive weeks (I was told by an EG employee).

With the stunning global success of Apple’s iPod music player and iTunes online music store, some have called for Apple to “open” the digital rights management (DRM) system that Apple uses to protect its music against theft, so that music purchased from iTunes can be played on digital devices purchased from other companies, and protected music purchased from other online music stores can play on iPods. Let’s examine the current situation and how we got here, then look at three possible alternatives for the future.

To begin, it is useful to remember that all iPods play music that is free of any DRM and encoded in “open” licensable formats such as MP3 and AAC. iPod users can and do acquire their music from many sources, including CDs they own. Music on CDs can be easily imported into the freely-downloadable iTunes jukebox software which runs on both Macs and Windows PCs, and is automatically encoded into the open AAC or MP3 formats without any DRM. This music can be played on iPods or any other music players that play these open formats.

The rub comes from the music Apple sells on its online iTunes Store. Since Apple does not own or control any music itself, it must license the rights to distribute music from others, primarily the “big four” music companies: Universal, Sony BMG, Warner and EMI. These four companies control the distribution of over 70% of the world’s music. When Apple approached these companies to license their music to distribute legally over the Internet, they were extremely cautious and required Apple to protect their music from being illegally copied. The solution was to create a DRM system, which envelopes each song purchased from the iTunes store in special and secret software so that it cannot be played on unauthorized devices.

Apple was able to negotiate landmark usage rights at the time, which include allowing users to play their DRM protected music on up to 5 computers and on an unlimited number of iPods. Obtaining such rights from the music companies was unprecedented at the time, and even today is unmatched by most other digital music services. However, a key provision of our agreements with the music companies is that if our DRM system is compromised and their music becomes playable on unauthorized devices, we have only a small number of weeks to fix the problem or they can withdraw their entire music catalog from our iTunes store…