DGM HQ The sky is

The sky is blue, the sun is shining I… 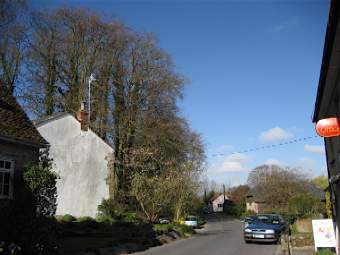 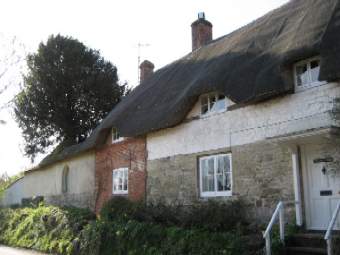 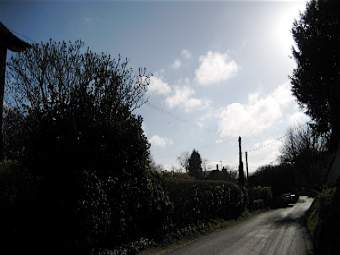 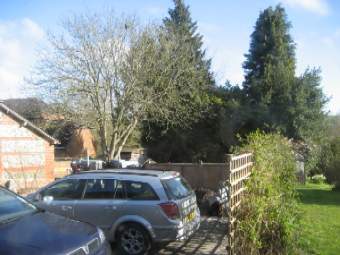 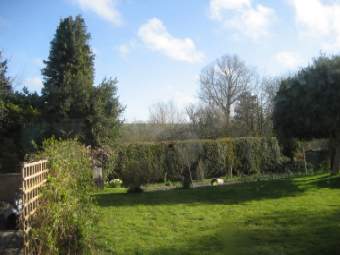 What are the specific elements of an ideal daily practice in Guitar Craft?

The question is addressed & the answers accessible elsewhere, in greater detail. On this particular morning, this is the quick answer. The comments assume that Crafties reading it are in contact with more experienced members of the Team, instructors and/or buddies, and do not adopt specific exercises without formal introduction & explanation, monitoring & feedback.

A personal practice, of which our guitar practice is a part, holds our day as a whole, single & unitary event. So, we construct a form which supports & orders the activities of our day, that our responsibilities are addressed efficiently & reliably, and our experiencing as rich & satisfying as may be.

The aim: to be in tune, in tone & in time, that we may better respond to the promptings of the Muse.

Definition, clarity & certainty at the beginning of our day;

when our feet hit the floor.

Definition clarity & certainty at the end of our day;

before our head hits the pillow;

Points of definition, clarity & certainty throughout our day;

on the hour, or half-hour, or quarter hour, as our practice is defined.

When our day ends, we re-connect with the events of the day by recapitulation, in reverse order; and connect with our next beginning-day, by putting our attention forward to our feet hitting the floor tomorrow.

The Morning Sitting, of 5, 6 or 7 days a week is the foundation of our day. This, and The Job Of The Day (although widely misunderstood), are Pillars of Guitar Craft & our daily practice.

A form defines the space within which an action takes place; within it, we use our initiative, respond spontaneously to the needs & arisings of the moment, and play. There is little that is dull in an active practice. There is form & structure, but no rigidity.

In time, the form moves from the outside (playing the human instrument & acting harmonically) to the inside (being musical); and the practice becomes a discipline. A discipline confers flexibility; and effectuality in time: that is, we are able to make undertakings & commitments in the certainty that they will be honoured. This is substantial, expensive, rare, unlikely, and possible.

A relevant aphorism is: better a good 30 minutes than a dispersed 60 minutes. The five recommended elements of daily work on the guitar are:

5.         Play: give yourself permission to suspend judgement on what you think you should be doing – and have fun! 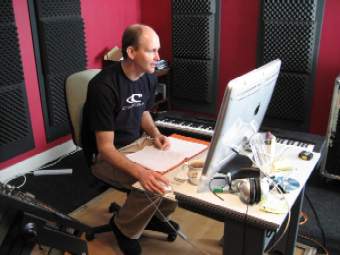 … a result of yesterday’s computer problems & unresponsive sound files; not the wisest act for a man of David’s intelligence & genetic follicular endowment... 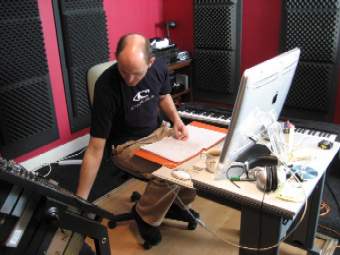 In SoundWorld II Plumber Mundy I… 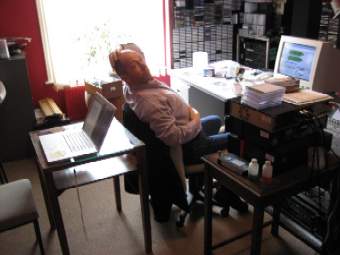 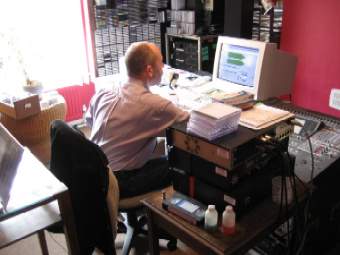 … and the RHHVL are preparing the very firstest of Fripp & Adrian’s ventures into the unknown sonic universe of ProjeKct Six, from February 18th. 2006 for free hot tickle DGM download. These were our beginning-rehearsals, recorded by the late Ken Latchney (cf Adrian Belew Power Trio blog)

Most of the recordings were lost by the collapse of StudioBelew’s computer the following day, a great loss. Ken was glum… 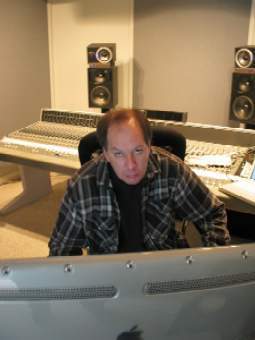 and pulling out his hair. Here also, not a wise act for a man of Ken’s intelligence.

End Time (as this area became known), the first piece F&A played together, remains a personal favourite. The guitarist’s playing was focused outwards, for the first time in a while. My Wife’s advice, on what it takes to get public support for my guitaring, is to play outwards. These are not the words she uses. The actual & specific words she uses are: Play with your dick! When first presenting this advice, after a moment’s thought, she modified it to her current position: Play your guitar with your dick!

End Time: Chateau Belewbeloid is probably my favourite single track of all our work together. It’s not perfect, but who cares? The feel is great & it’s fresh. It’s also free, so no outraged music-consumer can complain; that is, no outraged music consumer should complain. But anyone with close & extended familiarity of the public over several decades knows well: better that the public take no interest in your life & affairs. Cf the contrasting injunction: the voice of the people is the voice of the Lord. Where does that leave us? Perhaps…

In popular culture, the audient calls on the highest part in all of us.
In mass culture, the consumer demands the lower parts of what we are.

Now, Alex & Robert are looking at drawing hot tickles from The LCG5 recordings on 2nd. February, 2007 in Sant Cugat.

A Fearful Symmetry: Part One is werning forwards, in three takes, followed by a thribbling C major circulation. I own the rights to all of it. 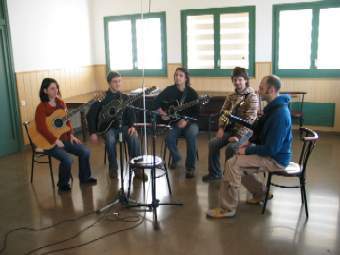 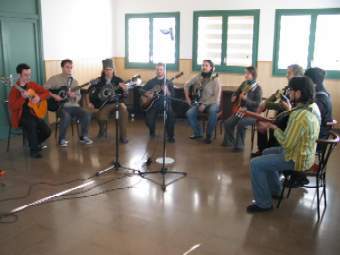 12.29  We have compiled an interesting selection of 5 hot tickles – completely free to registered DGM audient-consumers. None of them will complain. All of them will be happy and send comments of praise & gratitude to the DGM Guestbook. I will become personally popular & Guestbook posters will be fulsome in acknowledging my personal qualities, hitherto overlooked.

14.26  Alex & Robert have returned to Discipline & The Act Of Music, the second of three talks on the subject, given to the course at Camp Caravan on Saturday 4th. November, 2006 for free download, as an official bootleg. The talk was recorded for reference only; the sound quality good bootleg. Last reported here on February 7th. 2007.

Alex has handed me two items in today’s post. First, the new Fovea Hex CD, in acknowledgement of my small contribution to one of the tracks.

Secondly, a letter from The Royal Bank of Scotland in Douglas, Isle of Man, with details of my account holding with them (£0.00). You can’t escape your circle! as Michael Legg of Dorchester constantly reminds me. There follows an example of how true that can be…

On December 18th. 1987 Toyah & I moved to Reddish House (from Fernhill House in Witchampton) and which we sold in July 1999.

The RBS IofM account was instituted on the advice of bona Good Guy RBS bank manager & Rolling Stones’ fan Chris Hill (now with Coutts on The Strand & who, at the age of 16 in 1969, climbed a tree in Hyde Park to get a better view of King Crimson) as the best place to deposit money from the sale of Reddish House (1999)... 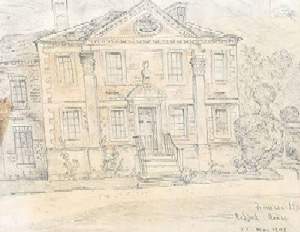 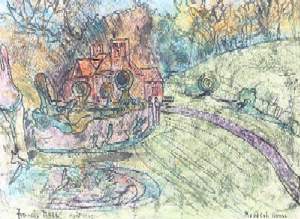 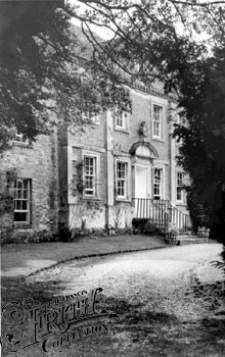 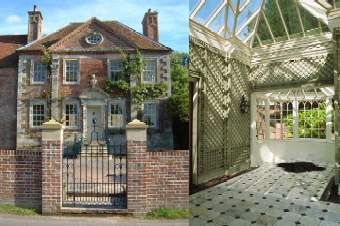 ...for 3 months, prior to it being needed on the purchase of Evershot Old Manor
(now Lesley Waters Cookery School) 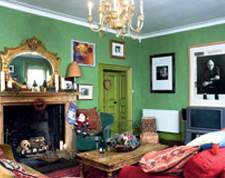 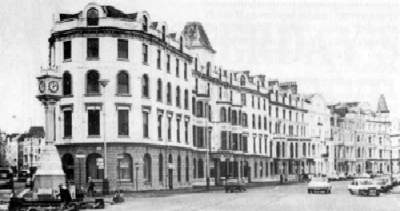 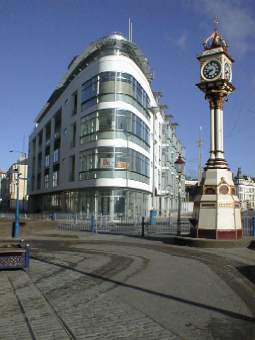 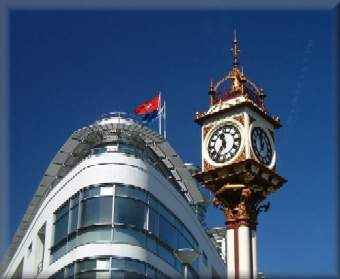 The Villiers Hotel was the family interest of SG Alder Esq., the chartered accountant renowned for his probity & sound business practices, noted for his charitable works (AGBIS, NYUSteinhardt, ISC Board, IoM Arts Council, 2006 Music Industry Trusts’ Awards, Jacoba) various other business interests (3FM,2020 Group (pdf file), IoM Creameries ) and himself a Manx man. In 1987 a £21 million redevelopment, based on the Villiers Hotel, was proposed by the Old Chelsea Property Corporation (the property company of EG partners Messrs. Alder & Fenwick) which acquired property around the Villiers Hotel as part of the development proposal.

These were not the glory years of the record industry (1968-78), which were certainly EG Music Group’s glory years; but the 1980s were the glory years of the English property boom when, according to one commentator, even dog food companies had a property department. The success of the Music Group provided a platform for a move into property, and in April 1988 the EG Group Ltd. guaranteed to bankers C. Hoare & Co. repayment by the Old Chelsea Group plc of £1,825,000. In August 1988 the property boom suddenly stalled, although it took a while for this to be recognised & acknowledged. In 1988, the Old Chelsea Property Corporation had a loss on its financial year of £391,766 (carried forward into 1989). In September 1988, on my September 30 royalty statement, Mr. Alder instituted a "recording reserve fund" of £20,000 against due RF record royalties, leaving an unrecouped balance of £1,000; ie the creation of this accounting device meant that EG Records did not pay me due record royalties. In November 1988 EG Management Ltd. changed its (1970) name to Athol & Co. Ltd. & a new EG Management Ltd. company was created from Andraford Ltd., which changed its name in turn to EG Management. In the Autumn of 1988 the pigeons of Lloyds’ began flying home to roost in the King’s Road, Chelsea; but these pigeons were not harbingers of good fortune.  (cf Risky Business: An Insider’s Account of the Disaster at Lloyd’s of London)

Time & space intermingle to hold us in our orbits.

16.48 David is enthusing about ProjeKct One and a recently discovered gem of ProjeKct Two.

Neither of us have any fear about making the complete archive available for download. The argument against this is: it’s too much stuff! Our view is that the completed archive will become a platform for present & future creative work, which will itself be added to the archive. Meanwhile, there is so much stuff unsorted, unmastered, untickled, that it sometimes feels like a drag on our movement forwards, in place. For myself, future-work is definitely constrained by my responsibilities to the catalogue.

21.40  Our landlord has telephoned, from the other side of the wall, to tell me stories of Les Collins, late & much missed gardener, and various arisings of Broad Chalke.

Indeed, Mr. Fripp is Evil Incarnate for teasing us listeners so shabbily. Now the bit about Maynard...

… is accurate. Maynard’s delivery is el fabbo to the max.

As a long-time follower and admirer of RF’s thought-processes and work, I’ve always been curious about aspect of his choice of reading material: where is the fiction? I recall an interviewer many years ago in the days of The League of Gentlemen commenting on the quality and quantity (even then) of RF’s bookshelves, and also on the lack of fiction…  for all the vast amounts you can learn about the world by reading non-fiction, fiction – at least good fiction – will tell you a great deal more. Creativity depends on creative input. So… I know that Hardy gets referenced RF, and that some of KC’s greatest work stems in part from the fictional village of Milk Wood, but is there anything else which deserves a place in the RF library?

The Children Of Violence series:
Children of Violence
Martha Quest
A Proper Marriage
A Ripple from the Storm
Landlocked
The Four-Gated City

… and, most powerful of all for me, the Canopus in Argos: Archives series…

Shikasta
The Marriages Between Zones Three, Four and Five
The Sirian Experiments
The Making of the Representative for Planet 8
The Sentimental Agents.

Mr. Macleod mentions The League of Gentlemen, who were playing Irving Plaza in 1980. Our hotel was nearby, The Gramercy Park modest but sufficient accomodations back in the day of pre-refurbishment. I believe we did two shows, and the events of the two may have coalesced in to one. However… David Bowie & The Iggamus came to a show, and I left late after a measure of post-performance socialising, perhaps around 1 in the morning. At the front & left of the theatre a beautiful young woman was standing, and approached me as I emerged: I’ve been waiting for you all evening! I smiled politely, and continued to walk a solitary block to the hotel, where I stayed up into the early morning, reading The Marriages Between Zones Three, Four and Five.

My Wife is convinced that most of my post-adolescent life, prior to meeting her, was spent in an ongoing furore of helpless rutting. And yet I chose Doris over a young beauty, and one whose personal merits clearly included patience. May the Minx, and those who doubt my valuing of fiction, please note.