Hooray! The grey of the beginning morning has lifted & the sky is now blue.

You Can’ t Escape or The Interconnectedness Of All Things: morning reading… 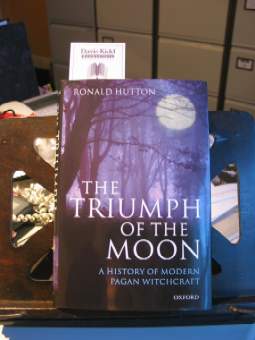 The Triumph of the Moon A History of Modern Pagan Witchcraft with Davis-Kidd bookmark from Nashville, site of many bibliophiliacal adventures while visiting Chateau Belewbeloid.

The chapter is on Gerald Gardner… 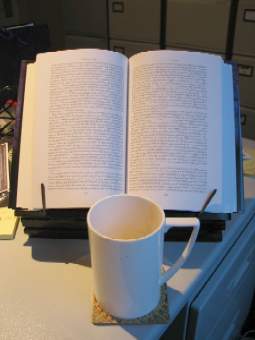 ...who operated the Witch Museum on the Isle of Man...where a young Sammy Alder, the Good Guy That You Can Trust, Renowned For His Probity & Sound Business Practices, would pop into the witch Museum for a clandestine cigarette while a teenage schoolboy (personal information to the writer from an older SG Alder Esq., then chartered accountant & manager). The sense I had, from Mr. Alder’s recollections, was of Gerald Gardner as something of a Friendly Old Uncle, tolerant & supportive of young mild naughtinesses.

The cup, a Jasper Conran at Wedgewood, was acquired from Fenwick, Canterbury in January 2004 when Slinky Willcox was at The Marlowe. Mr. Fenwick of Fenwicks was the partner of SG Alder Esq. in a number of companies, one of which managed my affairs & bore the name EG. The cup stands upon a coaster bought in the Canterbury Cathedral shop around the same time.

A young witch, Doreen Valiente…& here...met Gerald Gardner at the end of 1952, when Valiente lived in Bournemouth, the Big Town near Wimborne, Dorset. Bournemouth was the centre of my musical activities between 1959-67 prior to moving to London.

10.24    The second set of Slow Music – Live At The Croc. Slow Music improves with repeated listenings.

10.53  Bill Rieflin has just called from London. I have given him a favourable report on my Slow Music listening. A warning for innocent audients: this is not music for those in a hurry.

10.57    The 90 minutes of music from All Saints’ last Saturday is now gently edited to 80 minutes. This will now fit onto a single CD should anyone wish to download this as a FLAC file.

11.06    Alex & Robert are through-listening to Tone Probing in the church. This
will be uploaded in the first half of next week & available for download @ $1. Twenty minutes of gentle music for $1! It’s a steal. The 5 sections, Tone Probe BC I-III & Tone Probe BC IV-V Promenade, will also be available gratis as hot tickles for a limited period. The Promenades are where the player walked around the church, checking the quadraphonic sound from different vantage points.

12.28  A meeting with Hugh in the DGM Art Department along & at the end of the corridor, my former office, the cold draughty room above the chopping block in the village shop, to finalise the credits on Exposure.

Another arising, from a DGM Live e-correspondent…

I would also like to take this opportunity to ask one burning question. Why in heaven's name were 31 seconds cut from the magnificent ending of the original vinyl version of "In The Wake of Poseidon" when making the re-mastered CD? For many years I had been galvanized to the marrow by that gorgeous and very moving wash of elegiac sound, as it slowly faded into ineffable time, with each of Giles' incomparable fills etched in my yearning soul as the piece finally reached its 8 minute and 26 second conclusion, leaving me feeling slightly exhausted yet wondrously alive. You can imagine my excitement years ago when the re-mastered CD was released: Now, I thought, I could have that same remarkable experience, but without all the hisses and pops from a vinyl record that was over three decades old! Yet, there it was: fading way before it should, with those last several magnificent drum fills obliterated, unless one owns the vinyl, forever. Whose decision was it (it couldn't have been Robert, could it?) to cut this material and why? It's simply heresy.

I’d agree with the charge of heresy. The original fade was shaped so that Giles’ drumming would last almost until forever.

When Simon Heyworth & I re-mastered the catalogue, we used the best sounding masters we had available. These came from the Virgin archive, Virgin having acquired the tapes from EG in the collapsing days of Messrs. Alder & Fenwick’s companies. The tapes we were sent generally comprised several versions of the title. For example, the masters in the archive came from different territories & were for different purposes (vinyl & cassette & CD).

Master tapes, although nominally “the same”, vary considerably in quality. Various masters have “disappeared” from storage places, and some have been lost. The original 8-track master of Schizoid Man was stolen from the Wessex Studios tape cupboard, sometime between 1969–75. The most impressive loss of masters was last year: EMI in the US were unable to find any of the masters from the entire KC catalogue 1969-2000. That’s genuinely impressive.

Another way of putting this: the master tapes we work from are not guaranteed to be the best that were ever made, but we work with the best of those that come to us. Fortunately, this is usually satisfactory. And, surprise surprise, one of these was the very firstest & most originalist of all: the ITCOTCK first generation master copy from which all other masters were taken. Given the possibility of loss & damage, the first generation tapes were kept at home for safety - before being lost to keep them even safer than that.

Wherever possible, once I approved master tapes I would also supervise the actual mastering cut in London & New York, but not in other territories. Ian MacDonald supervised ITCOTCK in the US (perhaps the UK?) and discovered that the copy master had a problem on the right track, compensated for by EQ until the recent re-discovery. Supervising a cut was generally considered unnecessary, as mastering engineers were assumed to be competent. Some were. My interest was mainly in checking the stereo positioning, which I found to be very different in mastering rooms to mixing studios.

The other possibility is that some tapes were mastered in different countries on machines that were not very well maintained or from copies made in the source country (normally US or UK in the case of rock music) where the second machine was inadequately maintained/monitored. These tapes were then sent out to  licensee countries who had no adequate measure of comparison & trusted the source material from the record company office.

Tape machines running at different speeds occasionally resulted in albums being a couple of seconds shorter/longer.

When mastering for CD began in the late 80s, the first runs of certain albums - reproduced on CD at correct speed were at differing lengths to copies produced on vinyl (in Italy for example), but also sometimes in the UK & US.

As some manufacturing plants in Italy, it was unclear whether they were operating within the boundaries of any copyright law in the 70s.

There was a famously bad producer of Beatles cassettes (official/unofficial - who knows?) in Italy who decided to save money on tape used by making the cassette sides of equal length - even if that meant arbitrarily cutting songs mid way through to ensure the savings on cost were maintained.

Some fool at a major UK record company, regularly sent out original master tapes - instead of mastered cutting copies - to licensee territories (to save time, money, because he/she couldn't be bothered to order correct tapes or was too stupid? - we'll never know).

For all of the fond memories people have of vinyl, the CD era eradicated many dodgy practices & errors - even if it did introduce some of its own.

I could add more horror stories to these, but enough terror for one day..