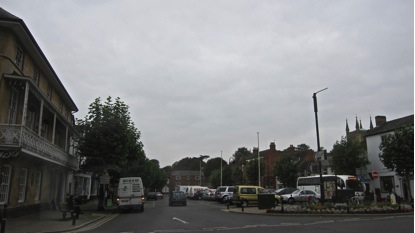 An uninterrupted night’s sleep, waking at 08.20.

A grey day. A call to the Minx on Gran Canaria. Her show is tonight. 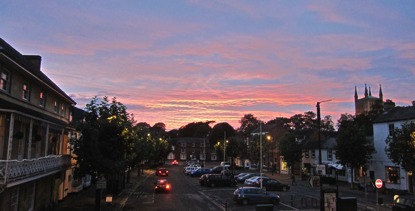 Late response to this, found on a discussion board…

Question:
How do I get Robert Fripp (of King Crimson) tones on guitar?
What's the best way to get Fripp tones on a guitar? Specifically, the mid-70s sound he had on albums like Larks' Tongues in Aspic and Red?

Best Answer:
Well, you're going to need about $10,000 worth of signal processing equipment, because I ran across a layout of his "Solar Voyager" rack and basically it boils down to: 3 Roland guitar synths (VG-8, GR-1, GR-30) 1 Midi Pedal Digitech Whammy Pedal G-Force Processor 100 watt Pre-Amps Delay Processor Harmonizer Effect unit Carver Amplifier But if you need to go cheap, try a Les Paul, neck pickup, a little delay or reverb, chorus, play some cool melodies over some interesting backgrounds... And remember that Fripp tunes CGDAEG

Not quite. None of the sophisticated & expensive gear mentioned above was available in 1972-74. A Les Paul & HiWatt (Marshall also fine) with a pedal board of fuzz unit (Big Muff & Foxy Lady both acceptable), wah-wah & volume pedal.

Animal Mother
I love Robert Fripp's tone in Brian Eno's Another Green World (especially "St Elmo's Fire) and I would like to reproduce this tone. As far as I know, Fripp was using a Les Paul at the time. I think he was using a fuzz pedal, but I don't know which. What are the other variables that make Fripp's tone sound almost like a square wave synthesizer tone?

echo unit
The Fuzz pedal was the WEM FUZZ. Not easy to find these days. Perhaps someone makes a copy of that circuit?  The tone of the guitar is shaped using a studio graphinc equalizer. Likely a 10 band API module or an Ashly or Klark rack unit. Eno loved to shape sounds using graphic EQ's and his main one for years was this cheap 32 band Ibanez rack unit Graphic EQ that is grey on color.  Also Eno fed Fripps guitar through a synthesizer known as the EMS. These synthesizers were all analog and unlike any other synthesizer they would allow you to use an external input device as an alternative to using the synthesizer's oscillators as the basic building blocks for sound.  So Eno would feed Fripps guitar into the EMS and use the synthesizer's ADSR , filters and other synthesizer type controls to shape the sound in real time with his hands on the synth manipulating while Fripp was playing.  It's nothing you are going to be able to get even close to repeating.

Not quite. I have tried a WEM fuzz, but not live: the level wasn’t high enough & I don’t recall using it on record. Similarly, the Burns Buzzaround: a great sound & used on GG&F but not loud enough for live rock work.

The tone of the guitar is shaped using a studio graphinc equalizer. Not by me. Eno shaped the RF guitar sound on many tracks with an EMS VCS3, as on Beauty & The Beast (Heroes), but not often with the primary RF fuzz sound (No Pussyfooting, Heroes). Beauty & The Beast was an exception. Usually, it was the straight guitar sound that Eno modified – the Heavenly Music Corporation arpeggio accompaniment (but not the fuzz melody line), through to I Zimbra.

The RF fuzz sound is something quite possible to get close to repeating, providing you also have the same attitude as the English guitarist, who manages to approximate the sound whatever equipment he uses, including the make of guitar.

An evening of computing ahead.