Two very good shows in London, and a welcome return to Birmingham last night - although I sadly don't get to watch all the shows, as necessary “business matters” rear their ugly heads: in this case the murky waters of “performance fees” (the money paid by artists & promoters to the writers of the songs that are performed).

Why murky?! For once, cannot something in this business be clean, transparent and efficient?! We all agree that writers should be fairly recompensed, so surely nothing could be more simple. There is a statutory body in each territory (PRS in the UK) charged with collecting and dispensing this money. But - surprise, surprise - there are “suspicions” that these bodies are perhaps better at collecting the money than distributing it (and some of them are not that good at collecting it either).  Rumours abound of “loans” to members of the board, of writers complaining that the “computer calculated” sums they have received do not match their expectations, and suddenly more money appearing for those who shout loudest, or of a major player in PRS who found vast amounts of undistributed performance fees owing to him personally. (If the error is that large for one person - who presumably knows how to operate the system - how large one wonders would it be elsewhere).

As with much of the modern professional world, it seems that the systems are inadequate, and the business is run as much for the benefit of those in charge as for the nominal beneficiaries (the writers).

That is before we move onto JASRAC, the collection society in Japan. They apparently do not license on true concert revenue, but by taking a nominal average of all the ticket prices. This would mean that if we sold just one Royal Package ticket at each concert for perhaps $365 (thereby introducing a more expensive ticket price), this would raise the "average" (even if we sold only one ticket) and we would instantly face a bill in excess of $60,000. This despite the fact that we have offered to play absolutely no music at the Royal package gathering.

Or the USA, where there are four different bodies that collect writer’s fees - and the venue pay an equal amount to all four, even though a writer can only be a member of one of them. So for most performers, three quarters of their writer’s fee will be going to agencies, who do not represent them, and therefore will not pay them.

For years, we have been in dispute with MCPS (who collect the writer’s fees on recorded music), pointing out numerous errors in their collection systems. It has sometimes taken years for them to issue a license for King Crimson products, which should be handled within two weeks. And their response? Not once, have we been approached by anyone in the organisation asking how their systems are faulty and how they might be improved. Instead, they employ their legal department in an attempt to silence us.

But there is hope! (At least in the world of performance fees). There is a statutory right to “opt out” of the system, and to collect and disperse your own performance fees - something we are endeavouring to do in partnership with Paul Crockford and Adam Elfin at PACE rights management.

But guess what? In order to release these rights, PRS are now seeking to make the writers sign an indemnity clause, so that PRS will not be liable for any mistakes they make (I am sure we would all love to get someone else to indemnify us against our own personal f**k ups). Quite simply an illegal delaying tactic. Aaaagh!

Meanwhile, back in the land of the sane, a few photographs from London: 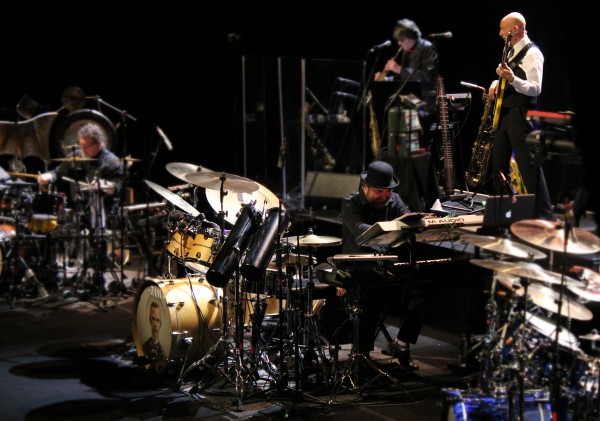 See you in Manchester, Liverpool, Glasgow and Edinburgh - the final shows of this UK tour. There have been some serious issues with one of the ticketing agencies (a different subject for a diary), who still have tickets available. Don't believe it if you are told they are completely sold out!!