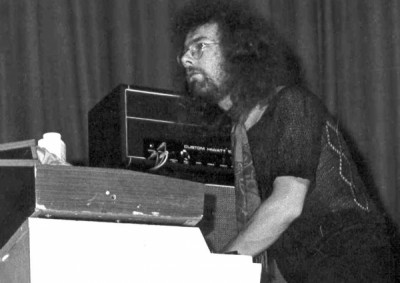 Missing its claw-hammer intro, a slow-burning version of Pictures allows Fripp to run at the fast-moving guitar sections like a greyhound out of a trap with impressive results. Mel’s sax over the slow middle section swings precariously between funky jabs and a roiling free-jazz alchemy.

“A song from Lizard. This is Cirkus” announces Boz immediately after Pictures. Alas we don’t get to hear it in this shortened set and leap straight to Boz announcing the next number. Fripp is clearly having some trouble with his custom-built pedalboard and we hear Boz suggesting the band start up with Robert joining in once his equipment problems are fixed.

So the band (initially minus RF) start into a tentative groove. Collins of course just blows the roof off as the band maintain a holding pattern (via the swooning croon usually heard on Formentera Lady) until the time shift into the Sailor’s Tale theme proper more than five minutes into the piece.

Fripp’s sustain pedal clearly isn’t fixed and so Collins carries the main theme with Fripp’s natural-sounding Les Paul adding what it can. There’s clearly a lot of scratched heads in the band after Mel’s stunning solo but the drama is resolved when Fripp’s pedal sparks into life, and we get a gorgeously plaintive outpouring that wouldn’t have sounded out of place in a future rendition of the Night Watch! It’s a good example of a band having to think on its feet and respond positively to an emergency.

Ian’s solo spot, which runs directly from Sailor’s Tale, is rather compact and the haste with which they go into Schizoid Man suggests the band are really up against the clock. Fripp’s madly careering solo during a fast-pace rendition of KC’s old warhorse is a real highpoint of this set. At the end of the show it becomes apparent that the band have had their set cut short not because of any equipment problems but because of local regulations concerning the use of the hall. A shortened gig but an intense one nevertheless with good sound quality. 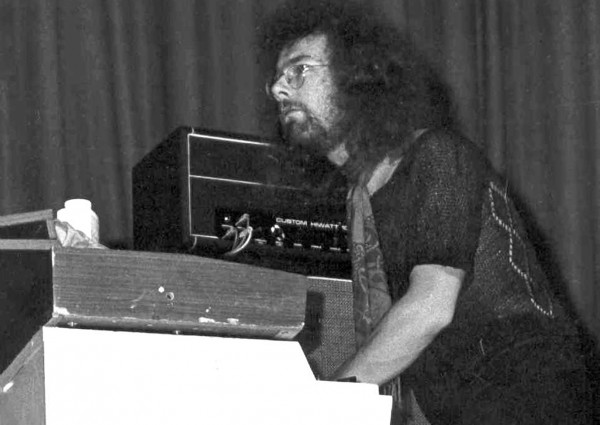 Pictures Of A City*

Missing its claw-hammer intro, a slow-burning version of Pictures allows Fripp to run at the fast-moving guitar sections like a greyhound out of a trap with impressive results. Mel’s sax over the slow middle section swings precariously between funky jabs and a roiling free-jazz alchemy. “A song from Lizard. This is Cirkus” announces Boz immedia...

Written by Douglas Allison
Now, you kids just go home!
As a high school junior, I was at this concert. At the time, I only had the first album, so I didn't know any of the later music. Rock concerts frequently featured multiple bands. As a result, many concerts didn't conclude until after midnight or 1:00 AM. I have memories of calling home to tell my folks the concert wasn't over yet, I'd come straight home when it was done, and yes, I'd drive carefully. The Powers That Be, worried about kids staying out (illegally) past the 11:00 curfew, passed a law that concerts had to end at 11:00. I assume this recording has been edited, because my recollection was that KC had launched into Schizoid Man when the power to the stage was cut and the house lights came up. Of course, the crowd began booing, yelling and stomping the floor and no one was going anywhere. Cleverly reading the audience, those in Authority granted permission for the band to finish their song, then everybody had to go home. The audience settled down, applauded, then KC launched into Schizoid Man again, apparently at the blistering pace heard here. I would have enjoyed hearing the stand off again, but whoever was recording at the board, facing the time constraints of cassette recording, probably hit pause until the situation was resolved. I do recall hearing the announcement at the end about trying to get the law changed and felt my frustration that I was too young to vote. Bands of that era often had lively and even outrageous stage performances. I had seen performers such as Jethro Tull, Alice Cooper, Dr. John, and later The Who. Fripp's stage presence was a stark contrast. He just sat and played guitar. My recollection is that he sat on a stool, but it's been a long time so that memory may be hazy. But his focus on just the music made an impression on my 16 year old self and I've never forgotten it. A poster found online shows that the opening acts were Sweathog, whom I don't remember, and Black Oak Arkansas, whose performance I faintly recall. Tickets were $4 in advance and $4.50 at the door. Those were the days!

Written by Jeff Oaster
Quite an odd show - but quite a good one as well
The write up for the following night at Summit Studios calls it "a contender for the strangest show in the archives." Well, this show, occurring only a day before, certainly gives it a run for the money. For one, it’s short - and fortunately the price reflects its brevity - which is clearly due to time constraints (and it is likely incomplete as Boz announces Cirkus after Pictures of a City). The other is the performances. It seems that the band was up against a curfew, and when Fripp’s pedalboard crapped out on him before Sailor’s Tale, Boz and Co pretty much decide to go on without him (is it just me or does someone say a rather curt "no" when Boz says to start the song). Anyway, we get treated to a really bizarre version of ST in which they start with the section that normally bridges Formentara Lady and Sailor’s Tale. I can only imagine what went on, and I envision something along these lines: Fripp unplugs his guitar from the pedalboard and performs "naked" - simply accompanying the other three. I have a feeling that the problem is solved, some signal is given, and the proper track begins. However, Fripp still is not re-patched to the board so he is still playing without his effects. Once it comes time for the solo, there is about a 10-15 second drum and bass duet (while Fripp replugs himself?) and then he launches into a beautiful, mournful solo unlike any other ST solos that I’ve heard. Great stuff. For some reason, after Sailor’s Tale, they launch into a briefer than usual drum solo (why the drum solo and not another song is a bit curious. Actually a drum solo might’ve been better than Ladies of the Road, but I digress) and then tear into a frenzied Schizoid Man - with almost all of the vocals annoyingly fed through the VCS3. Afterwards, the band apologizes for having to leave the stage and an announcement is made about the curfew and could everyone leave quickly. It must’ve been a frustrating show from a fan’s point of view. 40 years on, it’s a fascinating document to listen to. Add in the reduced price to go with decent enough sound quality, and it’s a no-brainer.&nbsp;