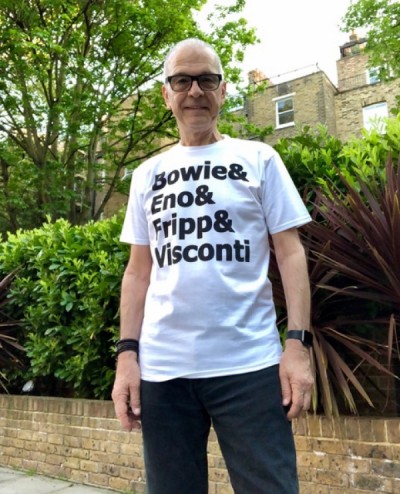 Below, Tony Visconti's words on the PPL and the David Bowie state dispute.
These and words from David Singleton, Robert Fripp, Brian Eno plus press articles covering the dispute can be read here.

My name is Tony Visconti.  I am the Record Producer of 12 studios albums and 2 Live albums by David Bowie.  I’ve also produced many single recordings and worked on special projects with David Bowie.  He has been my colleague and friend for 48 years.

It is my opinion that Robert Fripp is considered to be a Featured Artist on two of David Bowies very important progressive albums, Heroes and Scary Monsters.

Mr. Fripp was chosen because of his unique style, a total original, as a featured artist in his groundbreaking work in King Crimson and his collaboration with Brian Eno on several albums.  Indeed, for Heroes, Mr Eno and Mr Fripp were both invited to add their one of a kind collaboration to that album.

It must be made very clear that Mr Fripp is not a workaday session musician.  In Rock and Pop he is an artiste of the highest caliber, the equivalent of cellist Yo Yo Ma in the Classical world.  He is a first class soloist and for that reason alone his work with David Bowie on Heroes and Scary Monsters is consider Classic.  As the producer of these albums I can testify that Mr Fripp was not ‘told’ what to play.  We asked him to invent new parts as only he can for us.  We were in awe of what he played, something we could never have imagined.

Featured Artist and Featured Player are terms that were invented in the 1990s by record companies.  But it also applies to artistes that played on records back to the beginning of the recording industry from Thomas Edisons’ time. Its absence on a record sleeve can not be held against an artist who is featured on recordings before Featured Artist and Featured Player came into use.

Mr Fripp’s weaving, bending notes over David Bowie’s vocals on the iconic song Heroes alone proves that his counter melody are an enormous contribution to the recording.  Without his invention Heroes would be pale shadow of what it is.  The same applies to every track Mr Fripp was featured on, instrumental components I consider to be a duet with Mr Bowie.

Ask any Bowie fan and they will say the same thing.  I can only speak for myself.  If people who represent David Bowie officially deny that Mr Fripp is a Featured based on older album liner notes, I can only guess that their intention is to preserve their self-interests, not Mr Bowie’s opinion of how great Mr Fripp’s contributions to his were.