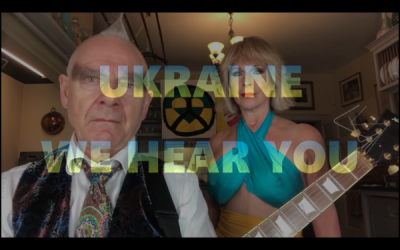 A commenter: Stay away from politics please!

RF: Toyah & Robert’s primary aim with their music covers is to laugh in the face of adversity (Toyah’s words this morning).
Two weeks ago we filmed Cult Of Personality with a conventional Sunday Lunch approach: Toyah, Robert and the twins bouncing about and having a lot of fun, mocking the pretensions of Power Possessors who have lost touch with the authentic needs of the citizens they nominally serve. The timing was right but, following the incursion of the Russian Confederation’s peace-keepers into Ukraine last Thursday, mothers lost their children, children lost their parents (on all sides), and the lightness of tone was inappropriate.
We are in an exceptional and heart-breaking situation. Toyah has been in tears, and felt we should re-film the video as a simple, human gesture to acknowledge the suffering of the civilians of Ukraine. Which we did this morning,
I am a-political, and vote Green. I am not so naïve as to ignore the military actions of this country, and its allies, which I view as unjustifiable. My favoured contribution to peace and the well-being of all is private, and more inclined to prayer than public protest.
However, once again as Toyah puts it: we are in an exceptional situation. We are publicly supporting the aspirations of liberal democracy (and I am not naïve in that respect, either) above those of autocracy.
In strange and uncertain times, a reasonable person might despair.
But Hope is unreasonable, and Love is greater even than this.