DEBUT BOOK BY RF
Posted by Mariana Scaravilli on Jul 1, 2022 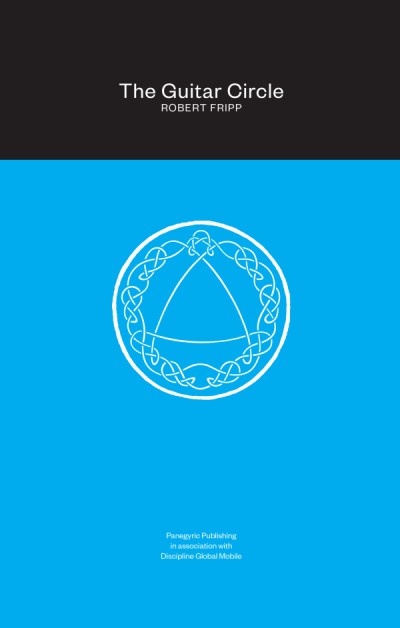 The long-awaited first book from Robert Fripp - 'The Guitar Circle' - collects much of RF's writing about Guitar Craft, as well as his unique approach to guitar playing, collaborating and personal development.

Presented in a limited edition first print hardcover format (and printed on high-end Italian Fedrigoni paper), the book is due to be published on September 1st 2022 by Panegyric Publishing.

This is the first in a series of books to include The DGM Diaries, Crimson Chronicles and membership of King Crimson (1969-2021) and personal commentary on living in New York during and after the recording of Exposure at a point in the late 1970s when New York was the fulcrum of a wider cultural rebirth.

The book will be available via Burning Shed (UK), Inner Knot (USA),  and other major online bookstores from September 1st.

“Where there is music there is hope”

If one had to choose a single aphorism, of the many associated with Robert Fripp, this is probably the key line. It informs everything he does as a writer, performer, band member and teacher. That last description is also significant. Of all of Robert’s diverse work, it is Guitar Craft that he describes as 'my proper work in life’.

So it comes as no surprise that, when choosing what aspect of his life to present in his first book, it is Guitar Craft that was, without hesitation, chosen as the subject.

Begun in 1985, Guitar Craft and the Guitar Circle has welcomed over 3,500 musicians – including former King Crimson members Trey Gunn and Bill Rieflin.

The Guitar Circle collects much of Robert’s Writing on the subject across decades of diaries, introductions to seminars and  courses, online writing and more, to present a comprehensive guide to developing a relationship with the guitar, with music, with the individual musician and working with others.

It won’t teach readers how to ‘play in a day’, a week, or even a year. It might, however, help an inquisitive musician to develop a personal discipline/approach to playing the guitar that will accompany that musician for life.

“Three capacities of the excellent player: to solo; to accompany; to be silent.”

Principles which Robert Fripp insists are met in all his work including within the music industry, an industry most often noted for ignoring all Four Pillars and, just as frequently, music itself.

The Guitar Circle is unlike other books by contemporary artists on guitar playing and music.

“In strange and uncertain times, a reasonable person might despair.
But Hope is unreasonable, and Love is greater even than this.”

* A talking tour, “That Awful Man and his Manager” is being undertaken with manager/business partner David Singleton – initially in Canada and the USA – September/October 2022, to support the book launch. Click here for tour dates and tickets.

* The Guitar Circle with Robert Fripp course will be held next August 22-26, 2022 in Glen Cove, NY. Click here to watch RF's invitation and for more info and registration.