THE COLLECTABLE KING CRIMSON COMPETITION
Posted by Sid Smith on Aug 23, 2006 - This post is archived and may no longer be relevant

September sees the launch of Panegyric’s Collectable King Crimson series.  Volume One will be a double album bill of Crimson Live In Mainz, Germany, March 30th 1974 and Live In Asbury Park, June 28th, 1974.

With both concerts already available separately as part of the King Crimson Collectors Club and DGMLive items respectively (and will remain so), the series is aimed at the casual and curious record store market rather than the hardcore fan base. 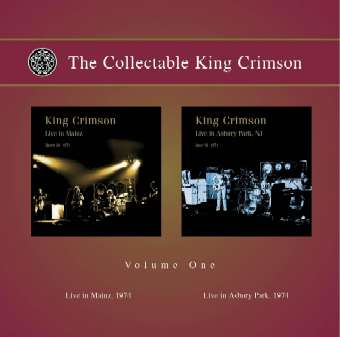 Bottom line here is that if you already own these gigs you don’t need to buy it a second time.

DGMLive has a competition copy of Volume One to give away.  If you’d like to win you need to answer this simple question - what was the name of Crimon’s tour manager in Mainz and Asbury Park?

Send your answer (only one entry per person) to the guestbook.  The winner will be chosen at random and announced  on Tuesday September 12th.

From the Panegyric press release

"Taken from the band’s own stereo soundboard tapes, Live in Mainz presents the 1974 quartet line-up at the peak of its powers days before the end of what was its final European tour. Featuring a trio of otherwise unavailable improvs, a killer version of the rare Dr. Diamond, material from the then about to be issued “Starless & Bible Black” & Starless from the then as unrecorded “Red” album this is a must have item for all King Crimson fans.

The Asbury Park Casino concert is the now legendary performance that gave rise to most of the “USA” live album. Three days later the band gave its final performance in New York. Technical problems with the original tapes made some of David Cross’ violin parts inaudible when mixed in 1974, so Eddie Jobson was brought in to provide overdubs. Edits of the concert were also necessary to allow for the time limitations of a single vinyl album.

At the end of the 1990s, ace engineer/producer Ronan Chris Murphy revisited the tapes. Advances in technology allowed for the restoration of all of David Cross’ original performance & with the vinyl time limit also removed, a new mix of the Asbury Park concert was undertaken. Effectively - USA II, this is its debut on CD –a unique concert, given a contemporary mix.

Recognising that subscription/mail order does not suit everyone, The Collectable King Crimson series aims to make the best of that series available to all. Each title will have a description of the source & quality of the audio on the outer sleeve.  Most of the titles will be issued for a limited period only & all will be sold at a special price."