There’s a chance to own a real King Crimson rarity - a King Crimson banner signed by all seven members of the band - and raise money for Cancer  Research. 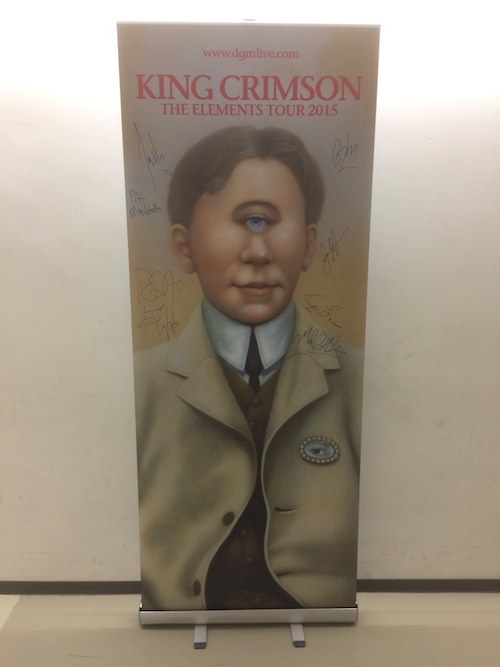 This banner stand was displayed in the lobby of almost all shows on King Crimson’s 2015 tours of UK, Europe, Canada & Japan.

There are a few slight dents & marks on it (it has been all over the world during it’s travels) but overall it’s in very good condition. Please see the photos.

It was signed by ALL the current band members; Robert Fripp, Mel Collins, Tony Levin, Pat Mastelotto, Gavin Harrison, Jakko Jakszyk & Bill Rieflin in Nagoya Japan on 21st December 2015 and is being auctioned for charity with their knowledge and blessing.

The successful winner of the auction will also receive a letter of authenticity from DGM and 100% of the profits will go directly to Cancer Research UK.

The autographed KC banner stand auction is now live on Ebay at 7pm and will run for 7 days.

TLev's verdict: "off to a steaming start"

KC manager, producer & much else speaks!

There's been a changeover of tracks on King Crimson's Myspace site. You can get your groove on to a blistering burst of ProjeKction from the forthcoming P3 download, or sample the Sailor's Tale from the about-to-be-available KCCC 35, as well cut your electro-rug with the coyly titled Improv II from KC's LA's HOB appearance in 2000, and round it all off with a slice of Potato Pie from Chigcago 2003..