My thanks to Tony Isch for sending in his thoughts on seeing Adrian Belew and chums last night.

"Thanks to DGM Live’s  heads up on February 2, I was able to attend the free Adrian Belew Power Trio gig at Sweetwater Sound in Fort Wayne, Indiana, last evening with my wife and son.  Wow, what a show!

This was advertised as a demonstration of the new Parker Adrian Belew Signature Fly Deluxe ($10,000, but a 15% discount available last night), with some ABPT tunes following, but it turned into a full-blown concert.  250 well-wishers crammed the performance theater, and an overflow room was filled with others who watched via closed-circuit video. 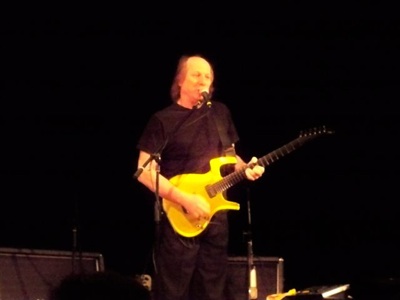 The Power Trio played ten of the twelve songs from the Adrian’s recent Side Four album (all but "Drive" and "Thela Hun Gingeet") over the course of 90 minutes.

"Dinosaur" was awesome!  Adrian, Julie, and Eric then hung around afterwards to greet the fans, sign some autographs, and pose for some pictures. I am pretty sure they had as much fun during and after the performance as the rest of us. 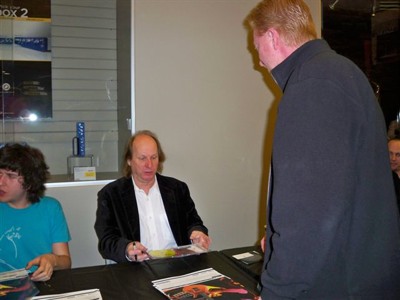 Thanks, again, for keeping us up to speed with your DGM Live News!"

You can also read Robin Slick’s prodigious news-gathering skills as she scoops up the net like its so much tutti-frutti over on her blog.

Now you can read about the sordid and twisted pleasures of a rock combo in action as they party and pleasure their way through a week of intensive rehearsals playing their loud rock n' roll music to the youth of today.