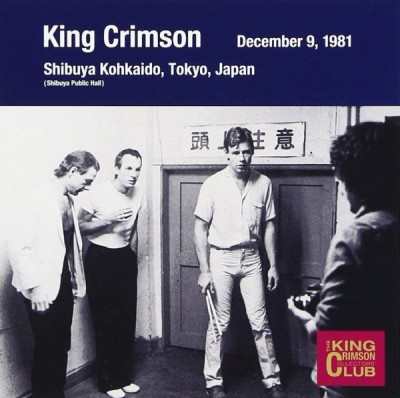 It’s difficult to exaggerate the importance that Japan holds in the history of King Crimson over forty years. The level of support from audiences and industry have been key elements in KC’s discontinuous-continuity.

A country boy, moving from Dorset  to London in 1967, the city was close to overwhelming for me. Moving to New York in 1977, NYC = London times three. Tokyo to NYC also times three on my scale of overwhelmingness…

In December 1981 Japanese culture was mysterious and impenetrable, to this English touring player. But I was aware that, without knowing how and why, I was likely giving deep offence while transgressing codes of polite and courteous behaviour of which I was unaware.

KC’s first Tokyo hotel was the New Otani. Each morning I sat in the buffet restaurant for three hours, sampling the wide varieties of local and Western tastinesses; watching, reflecting and writing. The most striking visual element was the divide between the generations of those above the age of perhaps forty-five, and that below it. The older generation was clothed traditionally, and with bowed legs; the younger generation in Western attire.

Audiences were strangely quiet in comparison to those in the US and Italy. The band thought we were dying - until the end of the performance when the audience erupted. We had little idea of KC’s popularity. So we kept coming back…

The Seven-Headed Beast Of Terror

The Eight-Headed Beast Of Terror

The Seven-Headed Beast Of Terror II

In 2021 on the surface the main cities have become more recognisably Westernised. I don’t believe this runs very deep. I do believe that I continue to offend and, while I bow more often and change my shoes more frequently than in 1981, I feel this is forgiven with the good manners and courtesy that I associate with Japan.