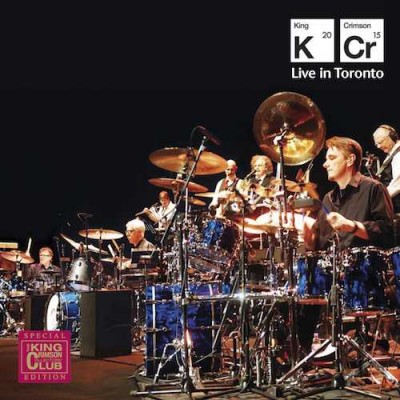 It’s a fabbo-to-the-max, triple whammy of a day for King Crimson fans. Not only is the first in-concert download by the current line-up now available via DGMLive, a mail-order only, 2-disc official collectors bootleg edition of the gig will be released on the 17th March.

If that’s not enough, then how about a full live album gathering together the complete King Crimson setlist compiled from numerous nights and selected performances. In response to overwhelming demand for video of the group’s shows, the multi-disc set will come with selected in-concert footage.

This major release will be made available to coincide with the start of King Crimson’s return to live performance later in September 2016.

If you don’t want or can’t wait until March or September, you can download King Crimson’s performance at Toronto’s Queen Elizabeth Theatre on November 20th, 2015 today. A superb example of the band in full-flight, it features some of the best-loved pieces in King Crimson’s catalogue as well as new material such as Radical Action To Unseat The Hold Of Monkey Mind and Meltdown. You can download it here right now.

The first full concert release by the current line-up of King Crimson will be released via mail order on March 17th.  You can pre-order here:
Inner Knot (USA customers)
Burning Shed (UK and Europe)

This Official Collectors’ Bootleg captures King Crimson on a single night in the middle of the band’s Canadian tour in November 2015. With the exception of one small edit following an announcement before the band take the stage, the running time of this concert is exactly as it was heard in the hall by those fortunate enough to have been there.  Even by the high standards set by King Crimson’s current line-up, this concert was agreed by all involved to have that extra special ingredient, making it the perfect choice when seeking an official release to counter the poorly recorded bootlegs that have begun to circulate.

Featuring the recorded debut of new material such as Meltdown & Radical Action, the three drummer percussion pieces Hell Hounds of Krim & Banshee Legs Bell Hassle & a variety of King Crimson classics – including material from In The Court Of The Crimson King performed & recorded live for the first time in decades, a return to the live set of Easy Money for the first time since 1974 & more recent powerhouse pieces such as Level Five & VROOOM – all material that the seven piece King Crimson has made very much its own in an absurdly short time of touring.

The first release by the current band was the 2014 mini-album, “Live at the Orpheum”.  This autumn, they will be releasing their long-awaited and much anticipated first major album – a comprehensive live release, taking the best performances of each song from the extensive set list (which changes nightly) & also including footage of selected performances. It will be released to coincide with the band’s 2016 European tour, which begins in the UK with two concerts at the Waterside Theatre in Aylesbury on September 4th & 5th, the band’s only UK dates for 2016.

For those who cannot wait until the autumn, this Collector’s Edition makes the perfect teaser.

The tracklisting is as follows
Disc 1:

2 Larks’ Tongues In Aspic Part I

3 Pictures Of A City

5 Radical Action (To Unseat the

8 The ConstruKction of Light

7 The Court of the Crimson King