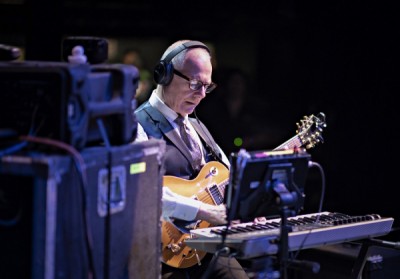 RF: This is closer to the literal, physical fact than perhaps Sr. Espinosa might have known. Gavin and Jakko were both suffering from Montezuma's Gift To Foreign Incomers at the Family & Friends Performance on Thursday 22nd. August, which was truncated as a result. Five minutes into the first set of the first public performance on Friday 23rd. August, fever kicked into the oldest guitarist, stage left, during LTIA I. Leaving the stage, and returning to the hotel, this deepened into a full-blown (yes, this is a pun) monumental frenzy; continuing on through the second public performance on Saturday 24th. August. Four of the seven Crims were frenzy-blowing away, without Emperor Montezuma's aid, while the remaining three of seven Foreign Incomers, selected for especial gifting, did what they could. For myself, any reasonable person as sick as that Guitarist Stage Left, would properly have been confined, for their own health, well-being and recovery. But - hey! - this is King Crimson! We do what we need to do, trusting that the Performance Event provides what is needed for both the possible, and the impossible, to be possible.