“IT’LL PLAY IN PEORIA”
Posted by Sid Smith on Mar 10, 2006 - This post is archived and may no longer be relevant

On this date in 1972, Mel, Boz, Ian and Bob set up to play to the good folks of Peoria, Illinois at a venue called The Barn.  The name Peoria was immortalised in Crimhistory as an improv on the live album, Earthbound.

According to my Dictionary of Invective by Hugh Rawson, Peoria gets its name from a Native American word meaning “place of fat beasts.”  I’m unsure whether or not this is based on stating the facts or a slur on the inhabitants.

The phrase quoted at the top of this item was used in the White House under Richard Nixon’s time as a benchmark to judge the acceptability of a given policy or strategy. 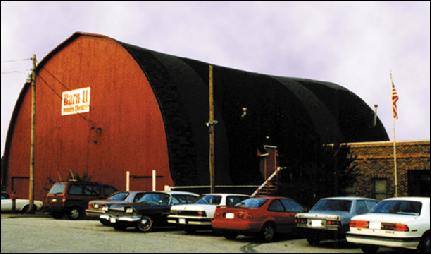 It’s doubtful that this is the same venue that KC played but I just liked the picture and the entertaining story of Chaunce Conklin’s barn and thought I’d share it.

If there are any Peorian’s who were at the gig and know something about the KC venue then please get in touch.

Finally, I notice that the Peoria Journal Star reports that Peoria arrests more men per capita than any comparable Illinois city.  What for?  Read all about it.