Beat, the ninth studio album by King Crimson was released on June 18th 1982. For the first time in Crimson's history, the same line-up had made two consecutive albums, and although they went on to release a third in 1984, recording Beat all but broke the band apart. 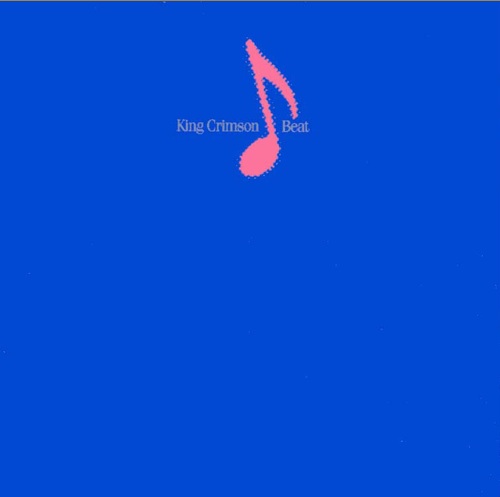 Looking back on this extreme example of difficult second album syndrome, Belew is unequivocal in his judgement. "Beat was the most awful record-making experience of my life and one I would never choose to repeat."

Things had come to a head during the recording of Requiem when Belew returned to the studio alone and overdubbed some further guitar parts.  Then Fripp followed suit, the two guitarists seemingly vying for position. "I seem to recall that Adrian was less than thrilled about this" said Tony Levin. Far away from home and under pressure to come up with lyrics and melodies, Belew pointedly told Fripp to leave the studio. Leaving for Wimborne and visibly upset, Fripp played no further part in the recording, leaving Belew and producer Rhett Davies to mix the rest of the tracks alone.

When remastering the album in 2001, Fripp offered this take on the album “At the time (1982) Bill & Adrian thought that Beat was better than Discipline. For me, this is an indication of how far the band had already drifted from its original vision. I believe Ade changed his mind; I'm not sure what Bill's view would be now. The group broke up at the end of Beat, as it did during the Nashville rehearsals (1997). I had nothing to do with the mixing of Beat, nor did I feel able to promote it. Somehow we absorbed the fact, and then kept going.”

Speaking of the relative brevity of the album Bill Bruford explained "In our creative processes the junk got scrapped and the only bits that we could all agree on as being remotely effective went forward. As soon as that quota was fulfilled — being 35 or 40 minutes for an album — then you were gone.  Done.  Finished.  Nobody wanted to stay another minute."

Drawing upon the writing of Kerouac, Ginsberg and the iconography of the Beat generation in general, upon it’s release Beat was the object of much suspicion and outright hostility from the UK music press, with Record Mirror being fairly typical. “Here we are in 1982 and the hippest of the hip (among Talking Heads circles anyway) King Crimson have made an album about the movement. And it’s a miserable effort. The essence of the Beat Movement was that it should be spontaneous, free and exciting. King Crimson seem to think that they should be churning out carefully constructed guitar phrases with Adrian Belew screaming with a calculated passion over the top...Perhaps the most meaningful number is the instrumental Sartori In Tangier, simply because it doesn’t feature the silly overworked vocals... Beat is a wasted effort that would be better off not just in another era but another planet.”

The Melody Maker reckoned “For sweet and sour contrast Sartori In Tangier takes a lot of beating, and is a far better instrumental than Requiem which resurrects the fiddly, pretentious discordance that for me was always the worst watercolour in Crimson’s palate.”

American reviewers were far more interested with this album. Rolling Stone’s Chip Stern awarded the album 3 and 1/2 stars, observing that "Crimson creates a new kind of electronic string music that achieves an orchestral density without resorting to ersatz art-rock bombast...King Crimson may never rope in a pop audience like the Police and Asia have, but they stand a good chance of attracting a following of disaffected listeners who want more from rock than a party"

Stereo Review cconcluded that "Beat retains much of the flavour of its immediate predecessor, Discipline but it seems less frenzied. Belew, Fripp and Co. have taken the distinctive sound developed for the more experimental Discipline and applied it successfully here to more conventional subjects. The excellent results suggest that the King Crimson may be set for a long reign.”

The album with a brand new stereo and surround sound mix by Steven Wilson is due for release in October this year. In the meantime, what’s your verdict? Is Beat ripe for rediscovery or something best left alone?