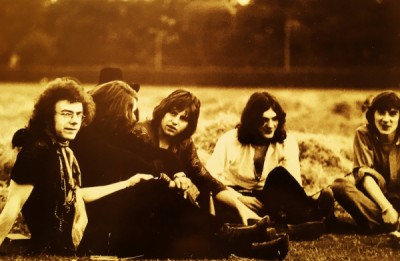 52 years ago on this day, Greg, Bob, Pete, Mike, and Ian decided on a name for their new band. Other names such as Wonderwall, 2001, and Spontaneous Combustion had all been considered but in the end, they went with Peter Sinfield's suggestion.

Momentous days are filled with mundane activities rather than any lightning bolt epiphanies. Thus Ian McDonald records in his diary for January 22nd, 1969 that he got up at three in the afternoon and washed his hair.

After picking up Peter Sinfield and a plugboard the pair drove to the Fulham Palace Road café for a rehearsal with Greg, Bob, and Mike. Sometime after 10.00, Ian had dropped Bob off home and went on to a friend's place to hang out and listen to some sounds on the John Peel show. It was after 4.00 a.m. in the morning by the time he got back home, an unremarkable, fairly typical day in the life of this young musician.

Almost as an afterthought, he adds to his diary, “Looks as if we are called King Crimson,’” the very first time the name appears in McDonald’s journal of the time.