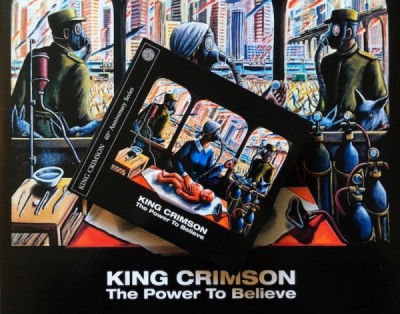 King Crimson's 13th studio album, The Power To Believe, was released on this day 19 years ago. Here's the background to the making of the last studio record to feature the Double Duo of Robert Fripp, Adrian Belew, Trey Gunn and Pat Mastelotto. 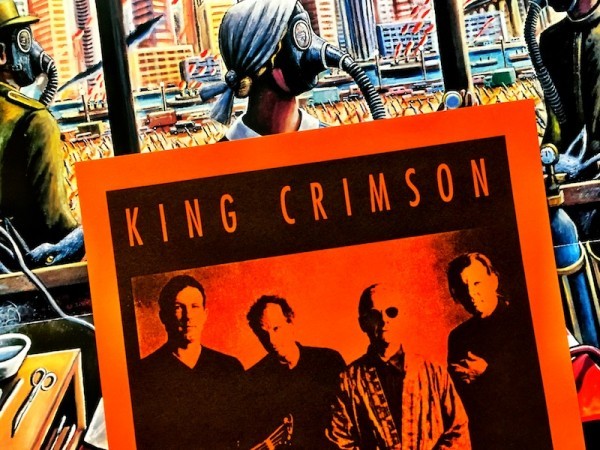 After several months of touring following the release of The Construkction of Light in 2000 the Double duo decamped to Nashville once again. This time however there were four principal differences when it came to recording the album. First, unlike TCOL which had been recorded entirely at Adrian Belew’s house, it was done at one of the bigger recording studios, The Tracking Rooms. Second, Pat Mastelotto was using a full electronic and acoustic kit. Thirdly, for only the third time in its history, the band was using an external producer, Machine. Fourth, unlike TCOL all of the material had the benefit of being played-in live for several months before it was laid down to tape.

For Machine, who was recommended by Gunn and Mastelotto, his work with King Crimson on the album is something he is intensely proud of. “Nuevo metal was Robert’s description. What he meant by that was a new sound for metal because there was a term Nu Metal for music like Korn, Incubus, and those bands were all part of that. There are so many metal bands that are influenced by King Crimson. For Robert, it meant something different. It was about the sound. The fact that I’ve worked with King Crimson comes often when people meet me, especially among these really educated metal bands. They’re very proficient on their instruments like Crimson is and for them, KC is a very big deal, like we all know Tool is very vocal about the King Crimson influence over the years. For me, it’s pretty awesome that I got to be part of that in a small way for a small amount of time.”

After the deceptively genteel a capella opening of The Power To Believe I, the brutal hit of Level Five, with the band’s patented bulldozer riffing at the forefront, reestablishes another Crimson tradition; beginning an album with a sucker punch, a quiet feint followed by a rapidly-moving metal-edged thump designed to hit the listener squarely between the ears. There is another callback to an earlier Crim practice in the use of a theme recurring at strategic points across the album. In the same way that Fripp’s Peace theme balanced 1970’s In The Wake Of Poseidon, the repeated use of The Power To Believe melody, with lyrics purloined and repurposed from Belew’s All Her Love Is Mine which had appeared on 1996’s Op Zop Too Wah, gives the album an architectural coherence and a sense of epic proportion made possible by instrumental tour de forces such as Level Five, EleKtrik and Dangerous Curves, the latter containing subliminal echoes of Fripp’s Merday Morn, the lead-in melody opening The Devil’s Triangle.

Belew’s wry sense of humour is given voice through his lyrics for Happy With What You Have To Be Happy With. Gently poking fun at the often difficult business of having to come up with words for music that often doesn’t make many concessions to such a practice, they also satirise the content of many of the metal bands operating in the field. Belew’s more introspective side was also given space to flourish with Eyes Wide Open, a beautiful ballad that provides, as it always did, a thoughtful contrast to the extraordinary airbursts of revved-up fretboard mayhem and percussive fury served up in FaKcts Of Life, a prime example of the metallic crunch and crush that this King Crimson’s heaviest-sounding work since Red.

Perhaps the most controversial absence from the album is The Deception Of The Thrush which in concert followed The Power To Believe III. “We did record a version of Thrush and I think it was OK but we couldn’t get the rights to use TS Eliot’s voice,” recalls Gunn. To get past this problem Fripp suggested processing his voice in place of Eliot. “He had some poetry, aphorisms or something. I thought I’ll give it a shot.” Some of Fripp’s tongue-in-cheek experimentation with the vocoder-like tones can be heard on the Happy With What You Have To Be Happy With. “I tried and tried and it felt so lame to me, for so many reasons, that I said I can’t make this work,” sighs Gunn. Eventually, it was determined that the thirteenth studio album from King Crimson should come to an end with a plaintive Belew vocal combined with an extract from a Fripp soundscape. The becalmed tones were recorded at St.Peter’s Church, Newlyn in December 1997.

Some would argue that the sense of resolution that comes from Thrush would have made a more satisfying ending to the album and that it’s a shame there is no ‘final’ version of the piece that was such a high point in so many ProjeKct and Double Duo gigs. However, Trey Gunn isn’t one of them. “I kind of feel like it was a very auspicious thing that Thrush is not on that record, that there isn’t a definitive studio version of that. It was kind of a weird thing to pin down a studio version of something that is so free and really has much more to do with the audience and the performance on the night more than any other piece that we did really. The pauses were so determined by the audience in that piece, like, if they could listen with us as the sound would decay away into nothing, we could only hold it as long as they could listen. As soon as they stopped listening we had to jump in. I can remember in Montreal they just sat there with us for the longest time. How can you do that in the studio? You can only contrive it. It’s music but it’s not that. So we probably auspiciously slipped through that. It would suck if there weren’t any recorded versions of Thrush but there’s plenty.” 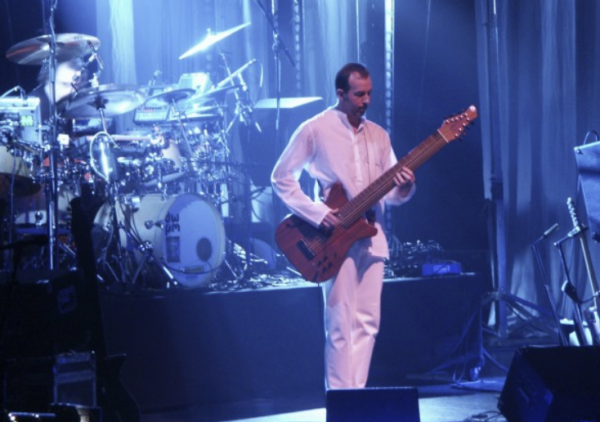 Released in 2003 the Double Duo continued to tour until November that year coming to an end in Mexico City and Trey Gunn’s last gig with the band. Although King Crimson would briefly regroup with Tony Levin back in the fold during 2004 it would prove a short-lived, interim lineup and the band would stay on hiatus until 2008. However, The Power To Believe, the last King Crimson studio album to date, stands as an impressive and potent statement that perfectly captures the creative energies at work with King Crimson at that time.