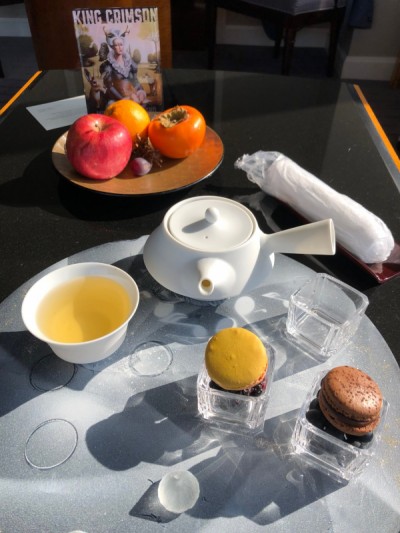 Only the second day, and I have already moved on to still life photography. This does not bode well.
Mr Richard Rees Jones was asking about the economics of touring. I do not claim this as my main area of expertise. In fact, I shall be overjoyed if next year I am no longer concerned with such things. But a brief overview is as follows:
The three participants are the venue, the promoter and the band (together with their booking agent).
The venue is paid a fee for the hire and staffing of the building (sometimes called the house "nut"). This does not in general change according to ticket sales (ie. it is not percentage based). Most venues do, however, take a commission on merchandise sales. As much as 30%. Which might (just might) be acceptable where they are actually selling the merchandise. But becomes questionable where the artist pays for the merchandise, ships the merchandise, sells the merchandise...and the venue takes 30% of the gross sales. But I digress.
On to the promoter. There is a joke about promoters. "How can you tell that a promoter is lying? Their lips are moving." However - the much maligned promoter takes the risk. For most shows, an artist is offered a guarantee. A minimum fee which they will receive however badly the concert is attended. In the case of a band like King Crimson, this guarantee might be $100,000 (sometimes more, sometimes less depending on the size of the venue, and the ticket price).
The "lying" joke kicks in over the calculation of the profit split, when the guarantee has been exceeded.
The profits at concerts are shared between the artist and the promoter - often on a 85/15 split - after the total ticket sales have been agreed, and the expenses (which would include the cost of the venue and promotion) have been agreed and deducted. You may have heard stories about artists getting friends to use "clickers" to count the number of people coming into a venue, when a promoter claims that a sold out venue is only half full. Or when they claim to have paid fortunes for large posters that no-one has ever seen.
I would like to say that thankfully we use a better quality of promoter.
So, as above, 85% of the profits from a show can be paid to the artist. But from their share, the artist shoulders all the costs of putting on the "delivered show". For the USA, this would include all the crew, the costs of entry, visas etc, the international flights, rehearsals, all internal flights /transport, international freight of equipment, internal trucking of equipment, all hotels, hire of any necessary audio equipment etc. Anything that is involved in putting on the show. A percentage of the artist fee, usually between 7.5% and 10%, is also payable to their booking agent who co-ordinates the tour.
And to return to Mr Ress Jones' original observation - "how can it be possible to cover all these costs from concert fees" - it is true that the fees are often matched by equally large expenses. There are three solutions:
1) Cut your expenses. This works badly in the long-term. Less well-paid crew or cheaper hotels might make for one profitable tour, but would almost certainly lead to unhappiness and a short-lived band.
2) Lengthen the tour. Many of the set-up costs are fixed. So if you tour for longer you eventually make money. Our tours are generally a week longer than some would wish. If you make them longer than that - see point one.
3) Additional income. Merchandise and The Royal Package. Hence the old adage "bands tour to sell T-shirts". And my ongoing thanks to the Royal Packagers.
As I am sitting in my beautiful room overlooking Mount Fuji (currently lost in the haze), I should point out that things work slightly differently in Japan. Here the promoter pays for the hotels. Which in this particular case has proved expensive, as due to the quarantine restrictions they were forced to reserve an entire hotel floor for an extended period (with a special rate - they are still only paying for the occupied rooms). There were five suites on this floor, and we were all offered the chance to pay the difference if we wanted one. Which I have done. And which seems like the most wonderful thing in the world as I am sitting here, locked in.
I may feel differently when the accounting arrives!