CHANGE IS AND CHANGES
Posted by Sid Smith on Feb 23, 2006 - This post is archived and may no longer be relevant

On this date in 1969 Greg, Bob, Ian and Mike got the train from London up to Newcastle on Tyne a day ahead of their week long residency at the newly opened Change Is nightclub.

In case you’re wondering where Pete Sinfield was, well he and Dik were driving up with all the gear in the van and wouldn’t arrive until the next day.

Booked under their old name of Giles, Giles and Fripp, they checked into their lodgings for the week in the seaside resort of South Shields before heading back into town to sample the delights of the club in full swing. 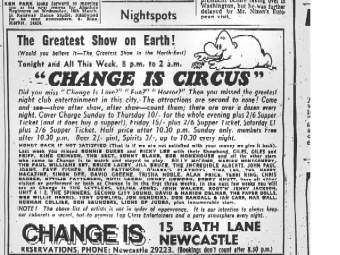 For a flavour of what Newcastle was like at the time you can check out an old blog entry of mine which describes the background to the club owners, the city and organised crime at the time.

Many years later Ian McDonald and Michael Giles returned to play in Newcastle as part of the 21st Century Schizoid Band at Newcastle’s grandly titled Opera House in reality a dilapidated cinema.  By luck, the venue happened to be a stone’s throw from the site of the Change Is night club which had long since been demolished.

I took Ian to one side and pointed to a patch of waste ground. “That’s where it all began, Change Is all those years ago” I told him.  Probably thinking me madder than a bag of badgers, Ian nodded, smiled and quickly moved on.