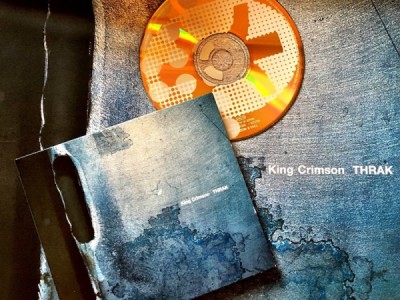 THRAK, the eleventh studio album from King Crimson was released 25 years ago today. Appearing a decade after Three Of A Perfect Pair, an expanded six-piece King Crimson consisting of the 80s quartet of Fripp, Belew, Levin, and Bruford augmented by Trey Gunn (touch guitar) and Pat Mastelotto (drums and percussion), reconvened and set about creating THRAK. 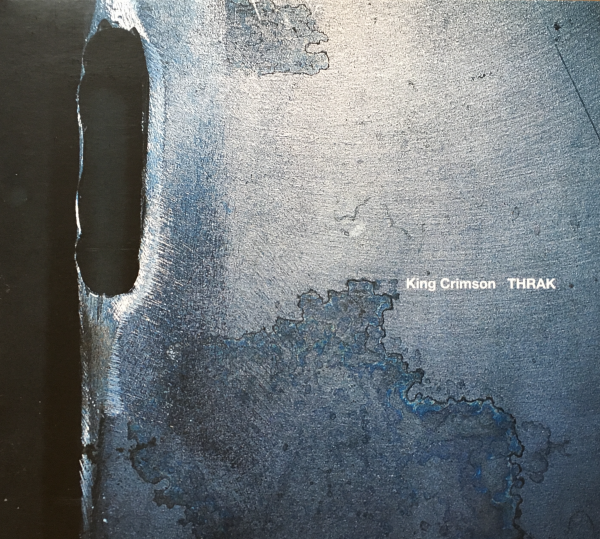 At the time most fans were taken aback at the unexpected appearance of the mini-album, VROOOM in October 1994, announcing as it did, the return of King Crimson to active service. THRAK followed in April 1995 to widespread critical acclaim.  Replete with a snarling metallic edge,the band could be heard taking a decisive leap forwards. The Double Trio, as Fripp dubbed them, deliver a brace of brand new Crimson classics, with the bulldozing riffs of VROOOM clearing the way. Dinosaur’s ironic, hook-laden choruses lurches into epic pop song territory, while the title track plunges deep into stormy, turbulent ensemble improvisation. Subtly articulated rhythms, caustic electronic textures, thoughtful ballads performed with Crimson’s trademark dexterity make for a remarkably coherent, stylish return to form. 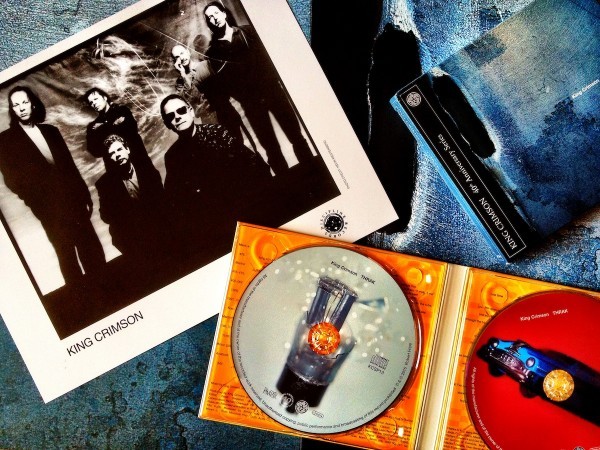 King Crimson has always had a habit of surprising its audiences. Since stepping off the stage at Montreal’s Le Spectrum in July 1984, Fripp, Levin, Belew, and Bruford had gone their separate ways. Although its dissolution had not been accompanied by the sombre pronouncement that King Crimson had ceased to exist forever as it had been in 1974, fans and observers could have been forgiven for assuming that there was little or no chance of King Crimson treading onto a concert stage ever again. The announcement therefore of a new six-piece King Crimson in what was then still a largely pre-internet age, along with the release of an EP, Vrooom in 1994 heralding a full-length album the following year, caused astonishment and delight in the Crimhead community around the world.

Fripp’s decision to put King Crimson back together had been made in the second half of 1990 though, as he later noted, without a clear idea of what the band would look like at that point. Clarification came two years later during the period he was working with David Sylvian. “The picture of a Double Trio formation appeared in a flash while I was driving past our village church towards Salisbury one afternoon in the Autumn of 1992. The double trio was not what I intended, expected, nor wanted but I trusted this point of seeing sufficiently to act upon it” recalls Fripp.

Trey Gunn, a member of Sylvian & Fripp, had first worked with Fripp in The League of Crafty Guitarists in the mid-1980s, was one of the first people to hear some of the music which would eventually be placed within the Double Trio. “There were even inklings of it before Sylvian & Fripp. He’d show me a little figure and we’d experiment with it, and I’d think, ‘that sounds a little like Crimson to me.'”

In February 1994, with Adrian Belew unable to make it over to the UK, Robert Fripp, Tony Levin, Pat Mastelotto, and Trey Gunn convened at Bill Bruford’s house in Surrey to start tackling some of the new material and ideas as well as older numbers from the KC setlist. “The hilarious thing about that session was they decided they were going to run through Red or LTIA Part 2 but nobody in the room knew it as well as Pat and I,” laughs Gunn. “Of course, Pat knew the record inside and out and I had a general idea. Having been in the band what you realise is that the way they approach tracks like that is not that fixed. You have the sense ‘we do these things, and now we’re going to do them this way; now there’s a new tuning so we’ll do it this way. Even Robert couldn’t really remember how it went. It was pretty much Pat telling everyone how the form went.” 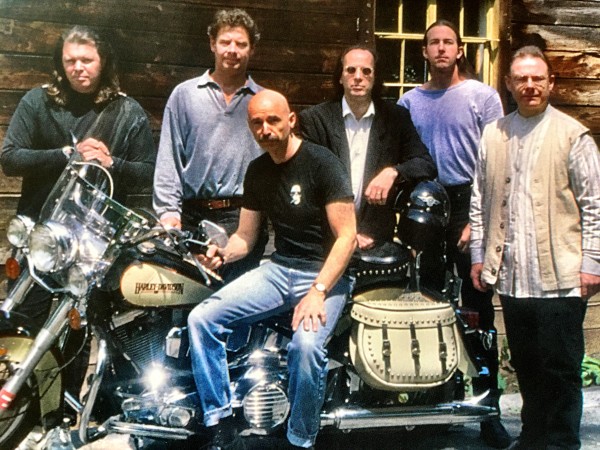 It was not until April, back at Applehead Studio, that all six members convened for the same space for the very first time, pulling material together through a mixture of blows and formal tunes.  Following an extensive run of live shows in Argentina, work on Thrak began in October 1994, at Peter Gabriel’s expansive Real World complex in Bath.  Recording the first King Crimson studio album in a decade was not without its problems - an erratic headphone mix was a source of consternation for the two drummers - but as the sessions proceeded the shape and form of the album gradually fell into place. 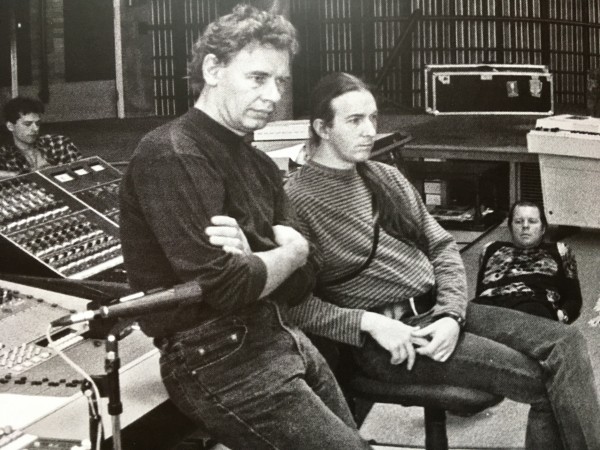 Gunn recalls that in the big room at Real World, Producer David Bottrill had large sheets of paper put up on which details and notes on each of the pieces would be entered and then scrutinised by the band. “At the start, it felt fairly fragmented; you go in dealing with it piece by piece. Then at a certain point, you start dealing with the whole recording, like what’s going to work, what’s missing. When it was all put together it felt like one complete thing. I haven’t heard the record in a long time but I do think it’s pretty remarkable that we could pull it off and it not suck, actually. We were really experimenting and you can hear that. I think it came out pretty well. I like making records. For some, it’s about capturing a performance and I totally get that,  but for me, it’s more about making a sculpture and that’s what Thrak is.” 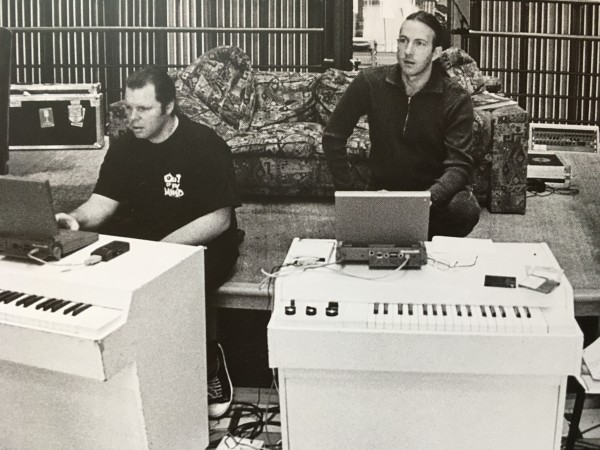 An often Crim-sceptical press was generally approving of the album upon its release in April 1995, although the band’s favourite headline came from the LA reader as the group toured North America: “Prog rock pond scum set to bum you out.”

When asked to chose his favourites from the album, Adrian Belew cites THRAK and One Time, “because between the two they represent the crucial balance of extremes which is what made King Crimson unique.” Thinking about the pieces that for him represent the Double Trio achieving its potential he opts for Sex, Eat Sleep Drink Dream. “It is one of the best examples of the definition of our double trio, especially in the sections where our drummers are playing in different time signatures together; it sounds like two bands at once. With a killer bass line from Tony and blistering solos from Robert, it's quintessential Crimson.”

Fripp worked alongside Jakko Jakszyk for this 40th Anniversary edition, describing the transformative mix as “a re-imagining of stereo in the early 21st Century.” For his part, Jakszyk observes “the new stereo version has the kind of clarity and detail that the surround has.”

Having left the band in 1997 Bill Bruford nevertheless retains a deep affection for the period in general and THRAK in particular “I do love the album. It just seems to have so much musical information on it in comparison to a standard rock record that you would think of today. It’s oozing hot spices and extra special gravy. A rich meal indeed.”